My head is in as much of a topsy turvy state as my room is. 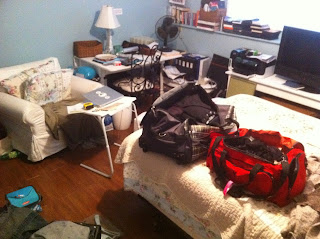 I am trying to sort through stuff in my room and it's hard to do when you don't have any space to divide the 'keep and pack' from the 'garage sale and get rid of' piles. It's a nightmare.

So is my head.

I went out and looked at the Toyota RV I found yesterday. It is owned by an old man who has a big bus RV as well but bought this just for a trip up to Dawson Creek and back, and that is all he's driven it. He got it cheap and in pretty rough shape and proceeded to spend a lot of time and money getting it into shape. It has a rebuilt engine, new alternator and wires, new batteries, new brakes, new rotors, new bearings, new shocks, new toilet, new fridge, new flooring ... and a bunch of other smaller stuff I can't recall. Even though he'd done all that, it was very dirty inside. The vinyl on the cab doors was sticky and dark with grime. The sink in the bathroom was filthy and needed new silicone - what was there was black and no longer attached to the sink. The kitchen taps were loose in the counter. The small bank of plastic drawers inside a cupboard were broken and wouldn't slide in and out very easily. There was almost no storage space other than a small closet and then TINY cupboards up at head-hight. And I do mean TINY.

Even though I thought it was on the small side and storage was definitely going to be a problem, I decided to buy it because I felt it was very mechanically sound. I did discover that the exhaust had a leak up near the engine when I started it up (probably shaken loose on the gravel road to Dawson Creek which makes me wonder what else got shaken loose) and took it for a run around his neighbourhood, but figured it was an easy fix. He wanted $7,500 for it and I left him a $2,000 deposit with him agreeing to keep it until I get back from Kelowna at the end of September.

I had regrets before I left his house. I just didn't feel sure it was the right one for me. And I realized that I had only researched what was available for under $3,000 in a camper van and had no idea what $7,500 could get me. I had sort of jumped at this because it was a good size to drive and park.

When I got home I did some research into the make and model and found that there had been a real issue with ones made just a few years earlier due to being too heavy for the axle and then it would break causing all kinds of collateral damage. This made me feel ill. I then went to an RV board and asked what they thought and got the reply that most of them don't recommend the Toyota because the chassis is too small. I called the guy who owns it and expressed my concerns and he said he never heard of such things and he had no issues with it or another one like it he owned several years ago. Somewhat mollified, I decided to keep it. Then, a few hours later, as I was still feeling like I had made a bad decision - the thing is really too small for me even though I am worried about driving something bigger - he called and said he wanted me to be happy with the decision and, if I wasn't, I had till the next morning to let him know and he would give me all of my deposit back. I really appreciated this and said I would let him know.

After reading some more stuff about it on line that I wasn't happy with, I called him and then drove back out to Chilliwack (an hour each way) and got my money back. I left there not knowing if I was making the right decision but I felt better so I think I am. Who knows? I know NOTHING about RV's and could really use the help of someone who does but I don't know anyone who even owns one.

To top it off - I sold my Jeep for $600 yesterday. It has over 370,000 miles on it and needs new rear brakes, rotors and a new catalytic converter and muffler. I still have it as I told the fellow I needed it 'till Sept 5th and that worked great for him. But now I am wondering if I should do the work on it and hang onto it so I have something to drive when I get back from the job in Kelowna. OR... I could maybe even take it up there if I got all of the work done on it. But I don't think it's worth getting the work done on it. It's OLD... a '93. Who knows when the transmission will go. It seems to all work fine now but I've had one go in another car I had and it's very expensive to fix and definitely not worth doing on this. I don't need to have a car to go to Kelowna as the production is taking a coach bus up for crew that doesn't want to drive, and will provide transport between the set and hotel. But once the job is finished and I come back down here, not only won't I have a place to live... I won't even have a car. So I am thinking I should hang onto it until I get that sorted out. He only left a $200 deposit so I can give that back.

I feel so unstable right now, second guessing myself at every turn.

I wish I had someone to run all of this by and help me think straight... but all of my friends are women and I don't know that they know any more than I do about any of this. What I wouldn't give for a good man right about now.
Posted by Sandy Montgomery at 1:02 PM No comments: