As a continuation of my post from last week:

Here are two pictures that show how much beach has eroded at Cow Wreck on Anegada: 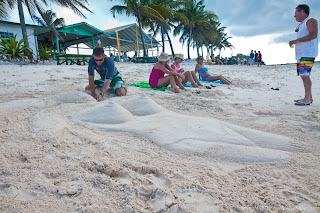 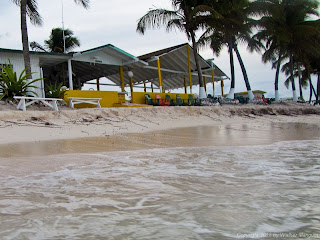 That is a LOT of beach, gone, in a very short amount of time.  There's barely enough level beach in front of the restaurant for the benches.   The photographer could not get far back enough into the water to match the exact angle on the October pic as the May pic was taken at - that is how much beach is gone!

Bill, an annual visitor to Anegada since 1979, had this to say:

The entire northwest and western portion of the point was solid sea grape. And by solid, I mean you could not penetrate it on foot. At least 250 to 300 feet of those sea grapes were dug up before construction began to allow a visual and personal access to the beach. I remember the cottages closest to the sea being back about 300'.. about a football field back. That immediately began shrinking by 50' to 70' per year, depending on northerly storms and swells.  The sea grapes were huge and old and the only protection the point had from erosion.

Another long time visitor had this to say about the conditions as they sit right now:


(What's) left (is) a deep channel near shore near the West End that has increased the strength of the west-running current along the north shore. I don't know when things will stabilize again to satisfy the new conditions at the West End.

If anyone has a photo of the west point of Anegada before the sea grapes were removed, I would love to see it.  You can send me a comment on here  (they aren't posted unless I approve them) with how to contact you.