I spent Wednesday and Thursday at the studio in Burnaby for the production of Mr.Young. Everyone seems really great and I think this is going to be a fun show to work on.

I am breaking new ground for Vancouver Script Supervisors. The AD (assistant director) on the show has worked on sit-coms in LA and handed me two scripts and paperwork from one of the shows she recently did. What a huge help it is to me. I went through it and it answered a lot of my questions, and those it didn't - she did. Also, a script supervisor from LA answered my plea for help on a discussion board I belong to with her phone number and two words - 'call me'. So I did and she was immensely helpful. Thank-you Jane Slater! But what both of them said, which has helped me more than they know is, "This is your deal. You're the first script supervisor up here to work on a sit-com. You set it up however you want and just make sure that the editor can work with it. You're the boss - this is your world - just go for it." So that's exactly what I have done and I am thrilled with the results so far.

This won't mean anything to anyone except another script supervisor but I have to say it anyway because I am so excited... I have halved the paperwork involved. HALVED. There's no facing pages; just the lined script and the shooting log - which I have completely revamped for a multi-camera format; there's no detailed descriptions of what each camera is seeing - the editor doesn't need it as they get a line cut feed (basically that's a feed of what the cut should roughly look like generated by the technician in the control room who is switching the feed between the four cameras as we shoot per the directors instructions at the previous days technical rehearsals); there is only one line on the script page for four cameras and it goes straight through all dialogue and action with no squiggles needed because all four cameras see everything - there's one line for each take, and the line starts over at pick-up spots; there's still a DPR at the end of the day, but only two days out of four (as we only shoot two days). There's lots of notes to take on the other two days for changes in the script as we block and rehearse. I will go over the notes with the writer's assistant and the script will then be rewritten to reflect the changes. Rewrites happen a LOT and so I don't do a one line synopsis - I go off of the AD's. I don't do a pre-timing, I time at the table read-through on Tuesdays and when we reherse; I've created a form that has all timings for each scene so that the writers and director can see how it all compares and make changes accordingly. Basically it all means that the workload is drastically - DRASTICALLY - reduced for me. I heard the director say that sit-coms are the best kept secret in Hollywood and I am starting to believe it!!

Here's a look at our sound stage, still under construction. We did a test taping of one scene last night. It went great. We film before a live studio audience on Friday afternoons at 5. The audience arrives at 4. If you want to be part of our audience you can get the information here. We welcome large groups such as school drama classes, etc. Bus pick-up will be arranged. 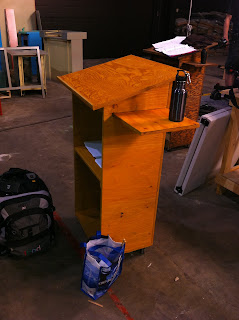 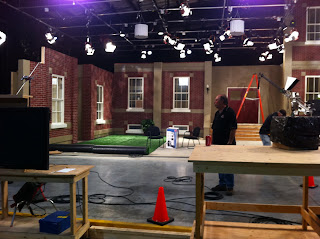 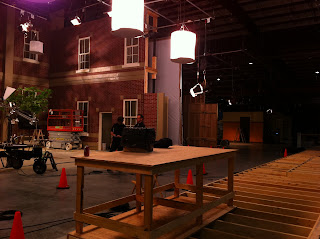 1)My rolling podium where I will do all of my work from.
2)School Courtyard
3) Down the Soundstage
Posted by Sandy Montgomery at 8:49 AM 2 comments: