LOOK WHO SHOWED UP TO WORK TODAY 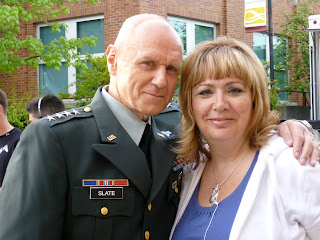 I think I may have mentioned that I am a fan of LOST. So you can imagine my excitement when I found out yesterday that today Alan Dale would be joining our show to play the role of the General. For those of you who aren't a LOSTIE, Alan plays the role of Charles Widmore (I want to say 'the third' after his name but I am not sure that is accurate).

When he first walked on set, I recognized him instantly and when he spoke I was surprised to hear a New Zealand accent. I introduced myself to him, as I always do with each actor, and told him I was a big fan of the show. He said he always wonders what LOST fans will do once the show ends and I told him I plan to watch every episode again in a short time span so I can figure out just what the heck actually happened. He laughed and said that if fans expect all the ends to be sewn up by the end of the show, we will be disappointed. I told him I figured out already that wasn't going to happen as this last season has brought more questions than answers. He said that the writers complained that they ran out of time to wrap it all up but that he thinks that is nonsense as they knew two years ago it was ending now. He then told me how a story point involving his character will not follow through on how it was set up earlier. That the continuity for his character was broken with the final thing that happens to him. He told me exactly what it was that happens and I felt frustrated in the lack of care by the writers to, at the very least, follow through on a character set up and to stick to the precepts they had laid out.

I don't have much faith that the ending of LOST will be satisfying... just the opposite. For those of you who remember the series Dallas; it reminds me of the year Patrick Duffy left the show so they killed off his character, Bobby Ewing. Then he decided he wanted to come back so the writers had a dilemma as to how to bring him back. I recall there were a few theories tossed about as to how they would do it and one was that it would all have been a bad dream of his wife, Pamela (played by Victoria Principal). Of all the theories that was the one I hoped would not be the one. It was. I quit watching after that because I felt like I had wasted a year watching a 'dream' where all the story line advancements were now irrelevant. Only this time it will be six years of wasted time. I hope I am wrong.
Posted by Sandy Montgomery at 8:19 PM 2 comments: