THAT'S NOT HOW I LEFT THIS!!

On my last three or four trips, my checked luggage has contained a 'love note' from the TSA - a letter stating that they felt it necessary to go through my luggage, mess it all up, and give it back to me without attempting to restore it to any sort of order.

As someone who is compulsively organized, there is nothing that upsets me more than to see my carefully placed items all askew.

The worst time this happened to me had nothing to do with the TSA.

Every time I go away, I like to leave a spotlessly clean house and clean sheets on all of the beds. I know I most likely will be coming home with suitcases full of dirty laundry - and when there were five of us, that was a lot of laundry - so the last thing I want to face is any sort of mess in the house. The laundry is enough, thank you very much.

Back in 1993 I was taking a trip with the kids to Seattle from Kelowna to meet up with their dad who was working there, to see if it was somewhere they would be happy moving to. I left the house in spic-span condition knowing that it would be lovely to come home to in a week. (We drove down in our mini van and hit the worst snow storm I have ever encountered on the Coquihalla Highway - in mid April!! but that is another story.)

We had a great time in Seattle and the kids loved it. We eventually moved there and hated it but, again, that is another story.

When I arrived home with the three kids and four suitcases full of dirty laundry I opened the door expecting to see my spotless house. Instead I found chaos! There were books on the floor, several ornaments and a precious domed clock which should have been on the mantle over the fireplace were all over the hearth and floor - the dome smashed to bits and the clock in pieces, and cracker crumbs and bits all over the couch and floor. In the kitchen the bread box was open and there was a trail of cracker crumbs and wrappings leading from it to the edge of the counter and all over the floor. A bunch of bananas looked like they had been chewed into. What on EARTH could have caused this havoc? And if it was an animal, which it was looking like to me, how did it open the bread box's roll front door?

I had spied a little pile of droppings of some kind on the arm of the couch, quite a large pile actually. It seemed this was the favourite resting place of whatever it was that did this. We soon found out what it was. A streak of silver darted past us into the dining room and we followed hard on it's heels. As we peeked under the table, a pair of beady little eyes in a furry face peeked back. We recognized him instantly; it was the squirrel the kids had been feeding peanuts to off of our deck all winter. Turns out I had inadvertently left the fireplace damper open and he had scampered down the chimney looking for his usual treats.

It took me an hour to get him out of the house, and three more to clean up his mess. Then I started on the laundry.

Anyway, back to my luggage issues. I always lock my luggage with a TSA accessible lock, and then, when I remember, zip strip the zippers together as an extra deterrent to anyone thinking of opening it up. Every time but one that my luggage has been opened by the TSA, it has been when I haven't used the zip strips. So there's a tip for you - use a zip strip as well as a lock and most likely they won't go through the bag.

There has been a lot of talk lately about TSA agents stealing items from luggage. To deter them from doing this I make an exhaustive list of every single item in my bag along with the line "owner in possession of a copy of this list" and place it right on top when I zip it closed. That way they know that I know exactly what is in the bag and will immediately miss anything they choose to help themselves to. As an aside - I also tape a piece of paper inside the mesh zipper part in the lid that lists my home address as well as my destination address and the dates I will be there, so that - should the unthinkable happen and my luggage gets misdirected - at least it shouldn't end up on the Unclaimed Baggage Center's website. So far I haven't had anything stolen. And my bag has only gone missing once; if you like, you can read about it here. 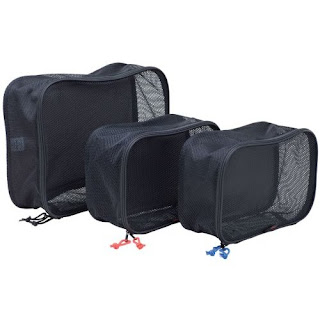 To help keep my items organized when they do decide to go through my bags, I ordered a set of Rick Steve's Packing Cubes from Amazon. I picked them up yesterday along with my Kindle. I plan on putting underwear and socks in one (not that I am taking any socks on my next trip), bathing suits in another, and not sure what I will put in the large one yet. They come highly recommended by frequent travelers and I am sure I will get much use out of them. Although I am going to try to have only carry-on luggage on this trip, I still like the idea of everything inside the bag being so organized. Once at my destination, I can just - easy-peasy - pull the mesh bags out of my luggage and pop them into a dresser drawer. And should the truly unthinkable happen and there's no room for my bag in the overhead compartment and it has to be checked, then I am prepared for the slovenly habits of the TSA.

Another thing I picked up in the same order yesterday was a Rick Steve's money belt. As I blogged about earlier, I am worried about the large amount of cash I must carry with me for the first leg of my trip, to Mexico, for dental work. They only take American cash as payment. And, as I don't have a credit card with a large limit, I will also need to take more cash and travelers cheques for the Caribbean portion of my trip. Reading stories lately of TSA agents teaming together to steal money from luggage as it goes through the scanners in security, I have been very concerned as to how I will safely carry so much cash and have concluded that the best way is a money belt.

The design of the belt has changed and so the one I have is different from the one pictured when I ordered it. Now instead of one small pocket for credit cards with a large one beside it for cash, the front pocket is divided straight down the middle meaning that the cash has to go in the back pocket along with any larger items, such as a passport. I don't like it as much as the one I thought I was ordering.

According to Rick Steve's, travel guru, this is what every good traveler should have in his or her travel belt:

Packing light applies to your money belt as well as your luggage. Here's what to pack in your money belt:
•Passport: You're legally supposed to have it with you at all times.
•Railpass: This is as valuable as cash.
•Driver's license: This works just about anywhere in Europe and is necessary if you want to rent a car on the spur of the moment.
•Credit card: It's required for car rental and handy to have if your cash runs low.
•Debit card: A Visa debit card is the most versatile for ATM withdrawals. (I no longer use traveler's checks.)
•Cash: Keep only major bills in your money belt.
•Plastic sheath: Money belts easily get sweaty and slimy (YUK!!!). Damp plane tickets and railpasses can be disgusting and sometimes worthless. Even a plain old baggie helps keep things dry.
•Contact list: Print small, and include every phone number or email address of importance in your life.
•Trip calendar page: Include your hotel list and all necessary details from your itinerary 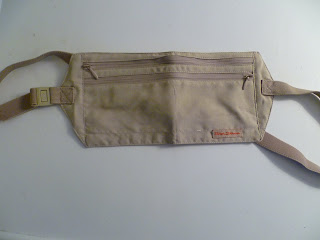 That's a lot of stuff for one small money belt. I won't have a rail pass so that should leave some room! And this one has a waterproof lining so I don't have to worry about the plastic sheath.

With all that stuff in there, I wonder if I will have room for the cash?
Posted by Sandy Montgomery at 12:05 PM No comments: