FORT GEORGE AND THE MARKET

I have been using the aloe vera before bed and it is amazing to wake up and see that the blisters from the night before are no longer there.  Amazing. The downside is, I go to bed every night smelling like the most disgusting curry dish.

I'm up early and farting about on the computer when I suddenly realize that it is Saturday and I have to be down at reception to meet my tour bus at 8:30 to go to the market.  I scramble to get ready and make it down there with a few minutes to spare.

When the van arrives, it is a different driver/guide than a few days ago and also a much bigger van - almost a small bus and it is not full so I climb in the back, get seated, say hi to everyone and then realize that one of the couples from the tour I took two days ago is across the aisle from me. We laugh and are happy to see each other.

We head to Fort George, up high on a hill overlooking the Carenage.  I thought we were just going to the market, I didn't realize this tour included the fort. Bonus!!

The sky is thick with clouds and just as we arrive at the fort and get out of the van, it starts to drizzle. We climb some well worn stone steps up to the fort. The view from up here is amazing and I am loving that the ruins of the fort have been left alone - original doors are laying where they fell off of their hinges, worn shutters still hang precariously at the windows. 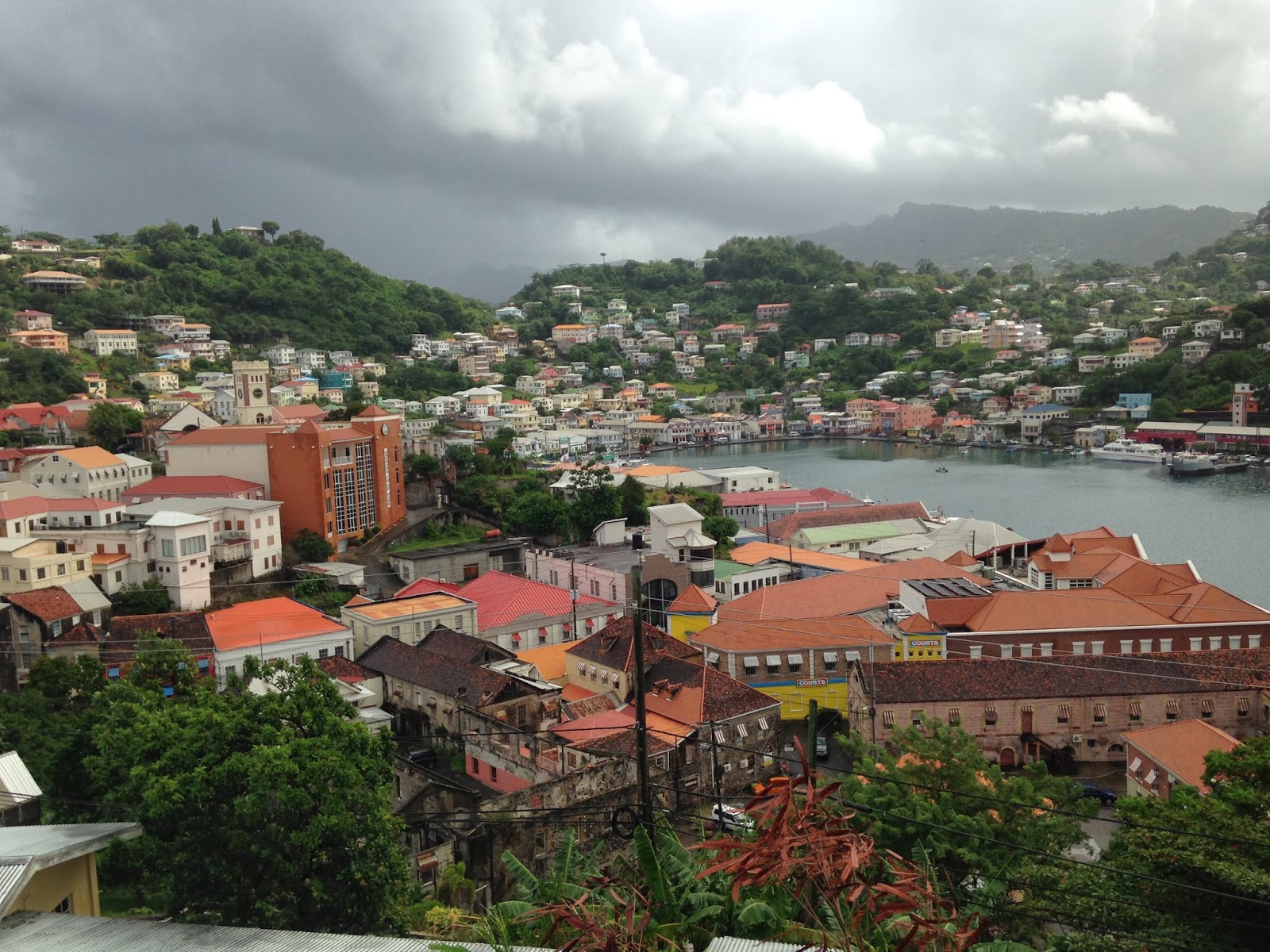 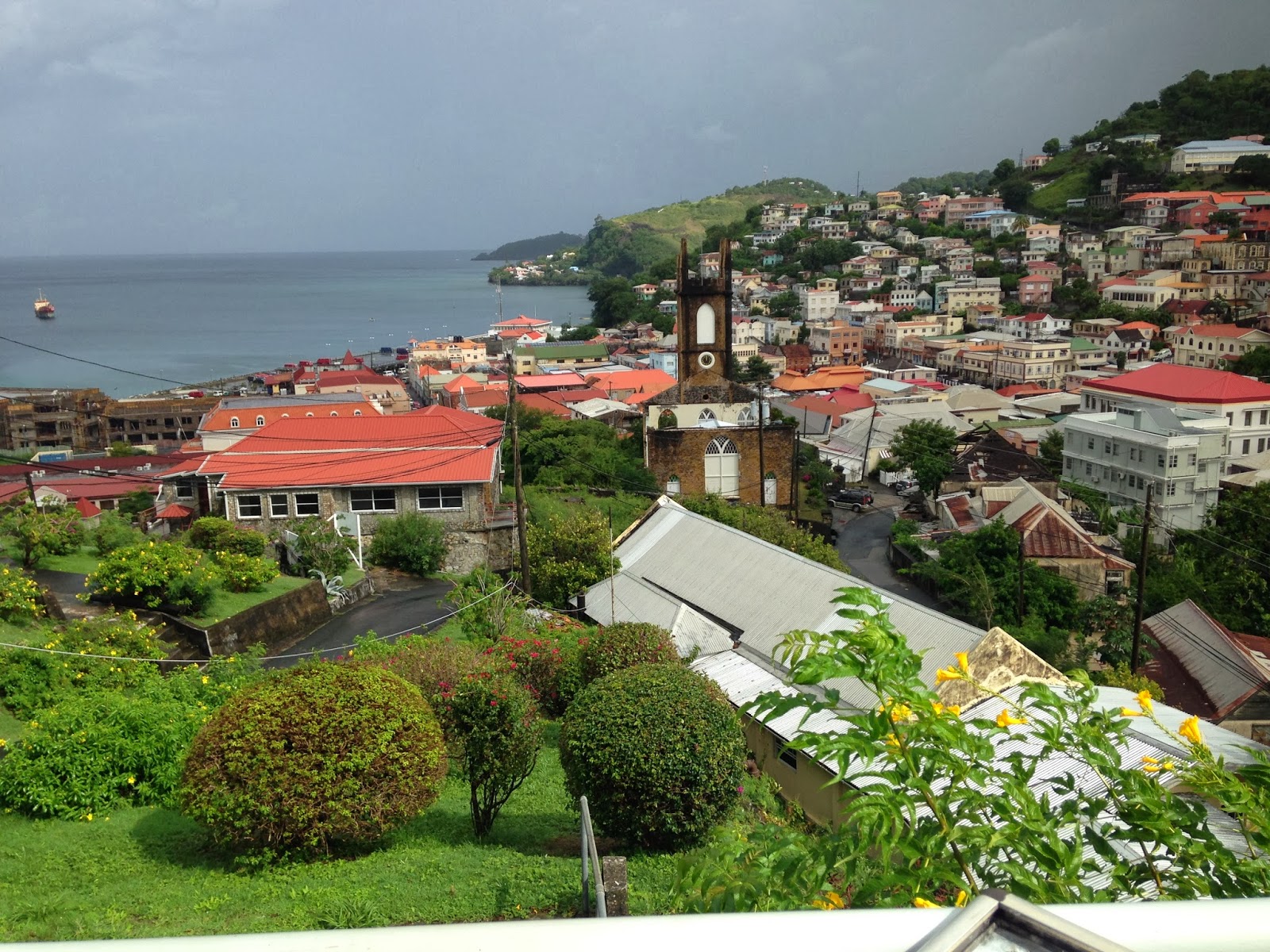 Here you can see the church that was devastated in the hurricane
still stands, in ruins.

In September of 2004, Hurricane Ivan swept the Caribbean taking 80 per cent of Grenada’s infrastructure with it and devastating the spice and tourist industries.  It killed 39 of the tiny nation’s 103,000 people and left 90 per cent of the nation’s 28,000 houses in shambles.  Most of the nutmeg trees which made Grenada the world’s second-largest producer, were uprooted by Ivan.            Read more HERE. 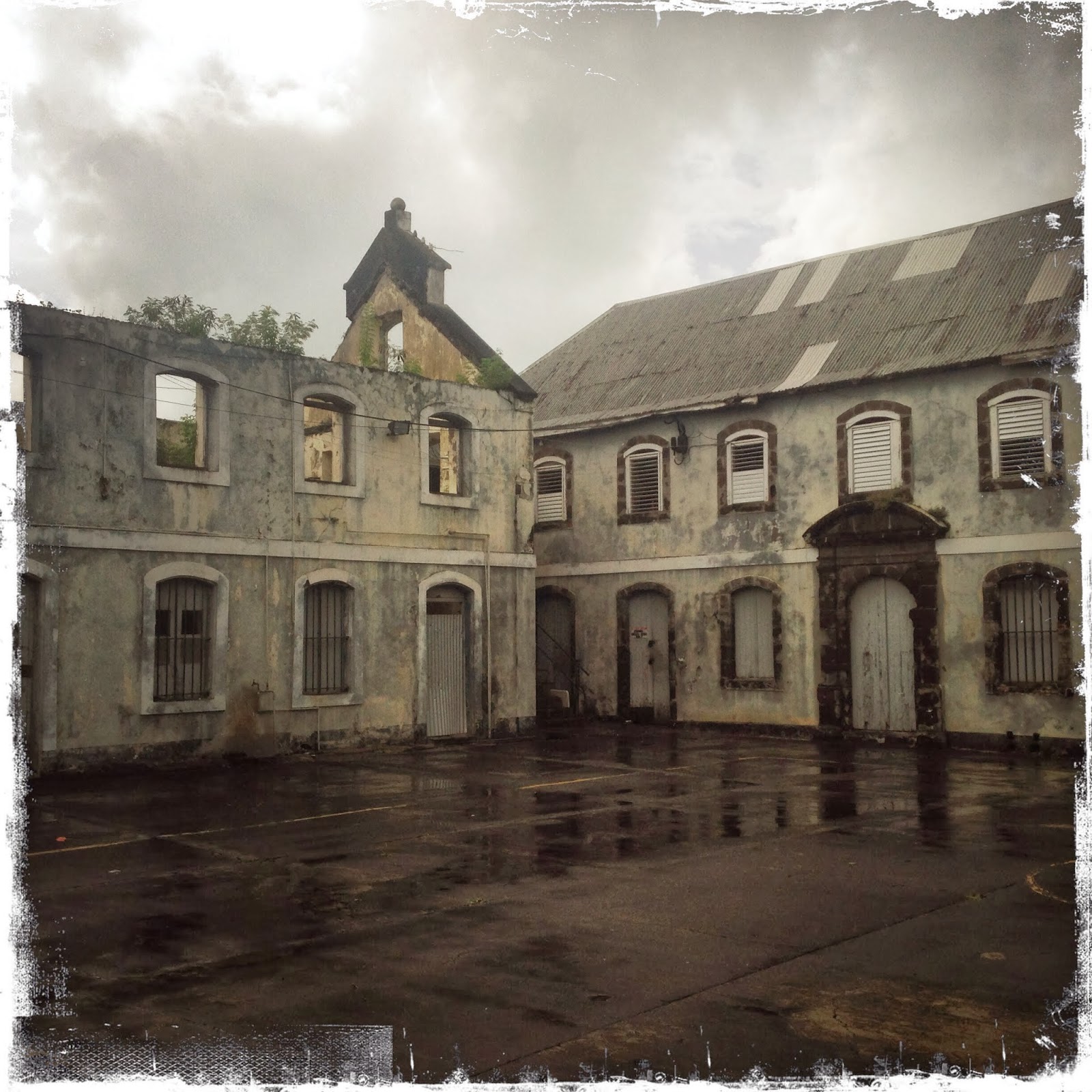 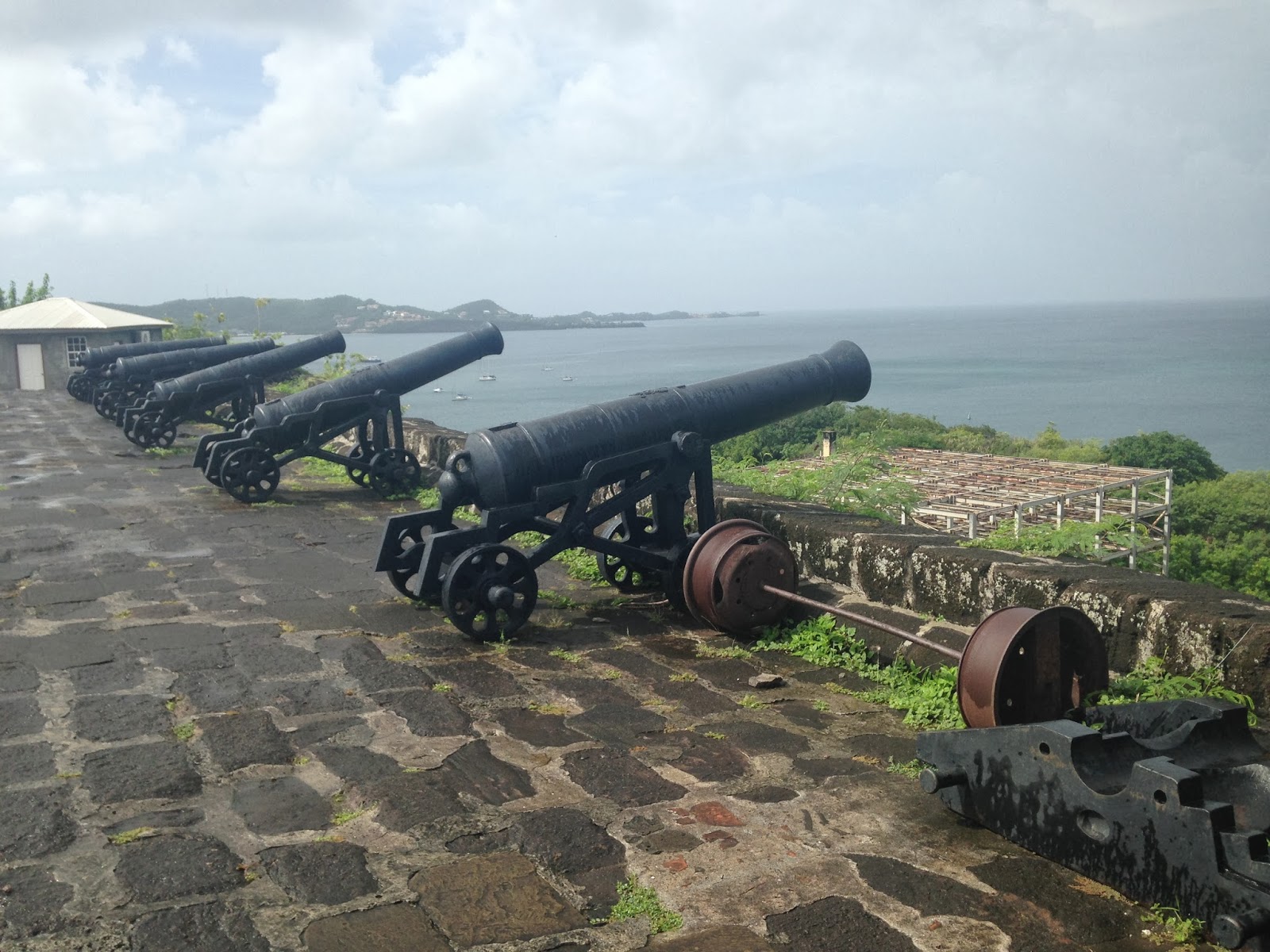 The Cannons of Fort George 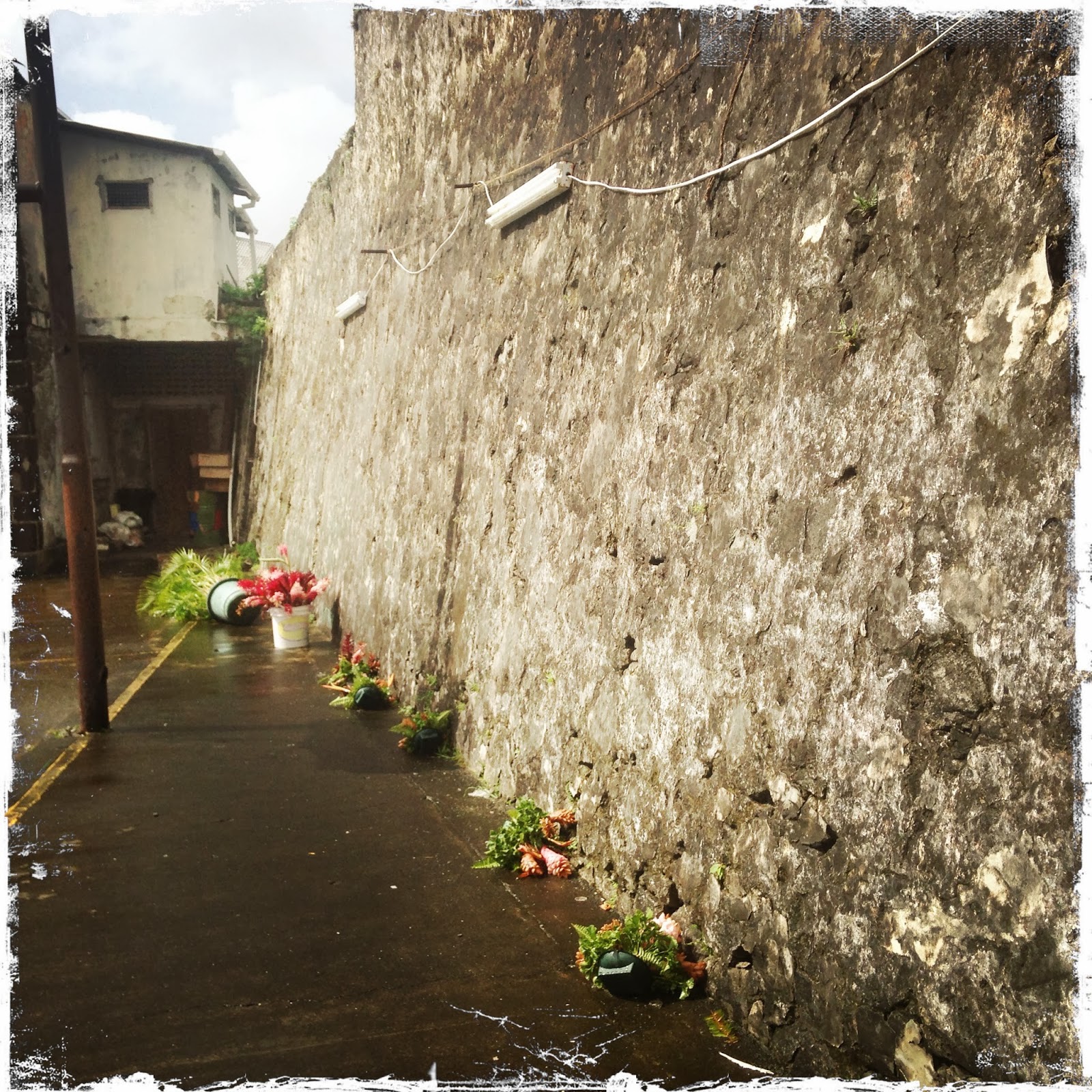 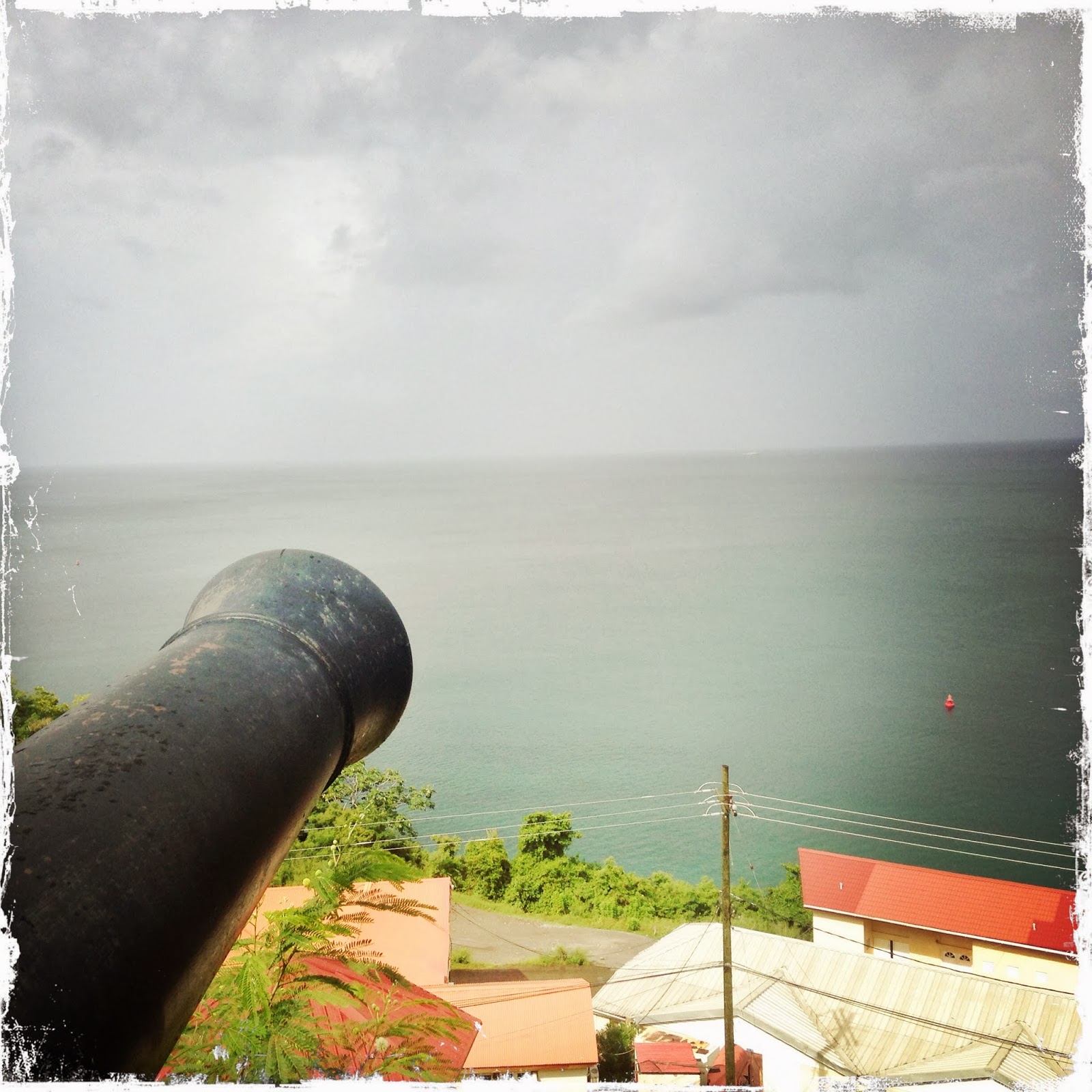 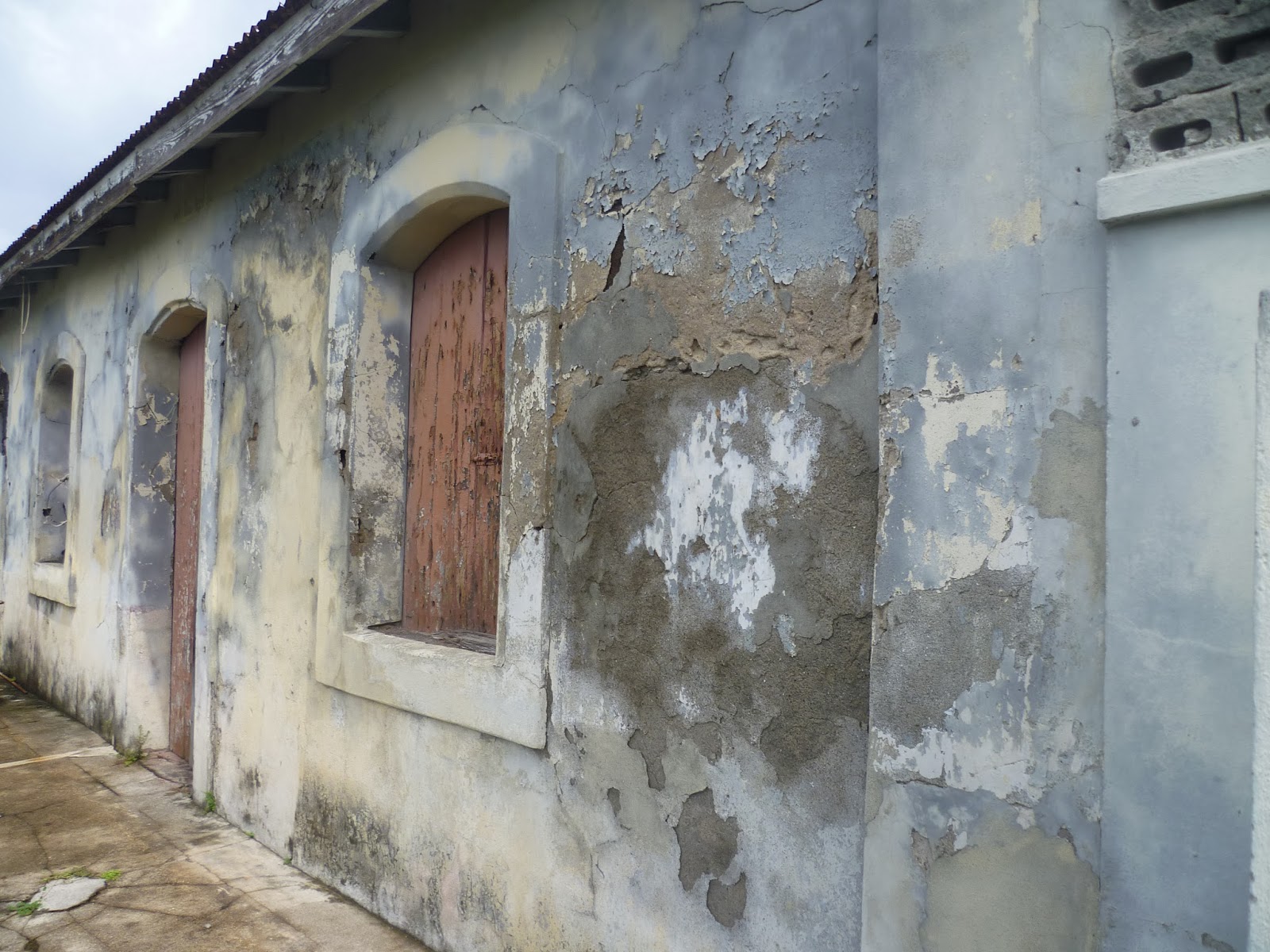 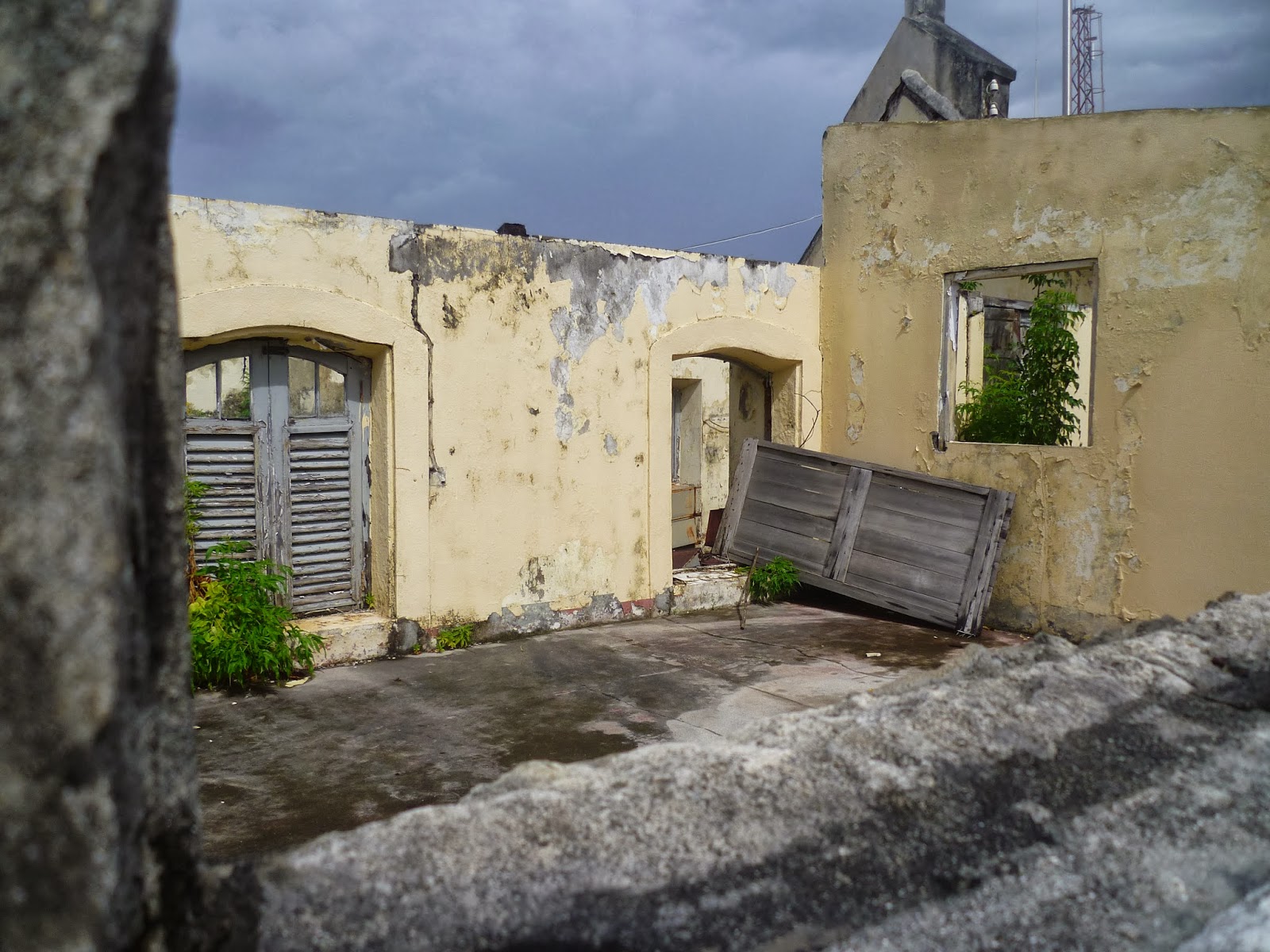 Part of the fort is now used as the police academy and a class is in session while we are there.

The rain stops during our tour, thankfully, and we head back down to the van to continue on to the market.

We park in the cruise ship terminal lot, there are no cruise ships in yet as the season has not started, and we are left to wander on our own and are instructed to be back in 90 minutes or the van will leave without us.  We all check our phones for the time, I set the alarm on mine for 80 minutes from now, and head off to explore. The couple I know asked if I wanted to go with them and I gratefully accept. We head into the cruise ship terminal where there are several shops that cater to the cruisers. We check them out and then head outside where the market is set up just across the street.  We stand at the traffic light, waiting for it to change and talking about which direction we will head in first, as the market is spread out over several streets, when a local guy walks up to us and asks if we've been to the market before. We say no and he says he will give us the tour and so we follow him as he leads us into the crowd. 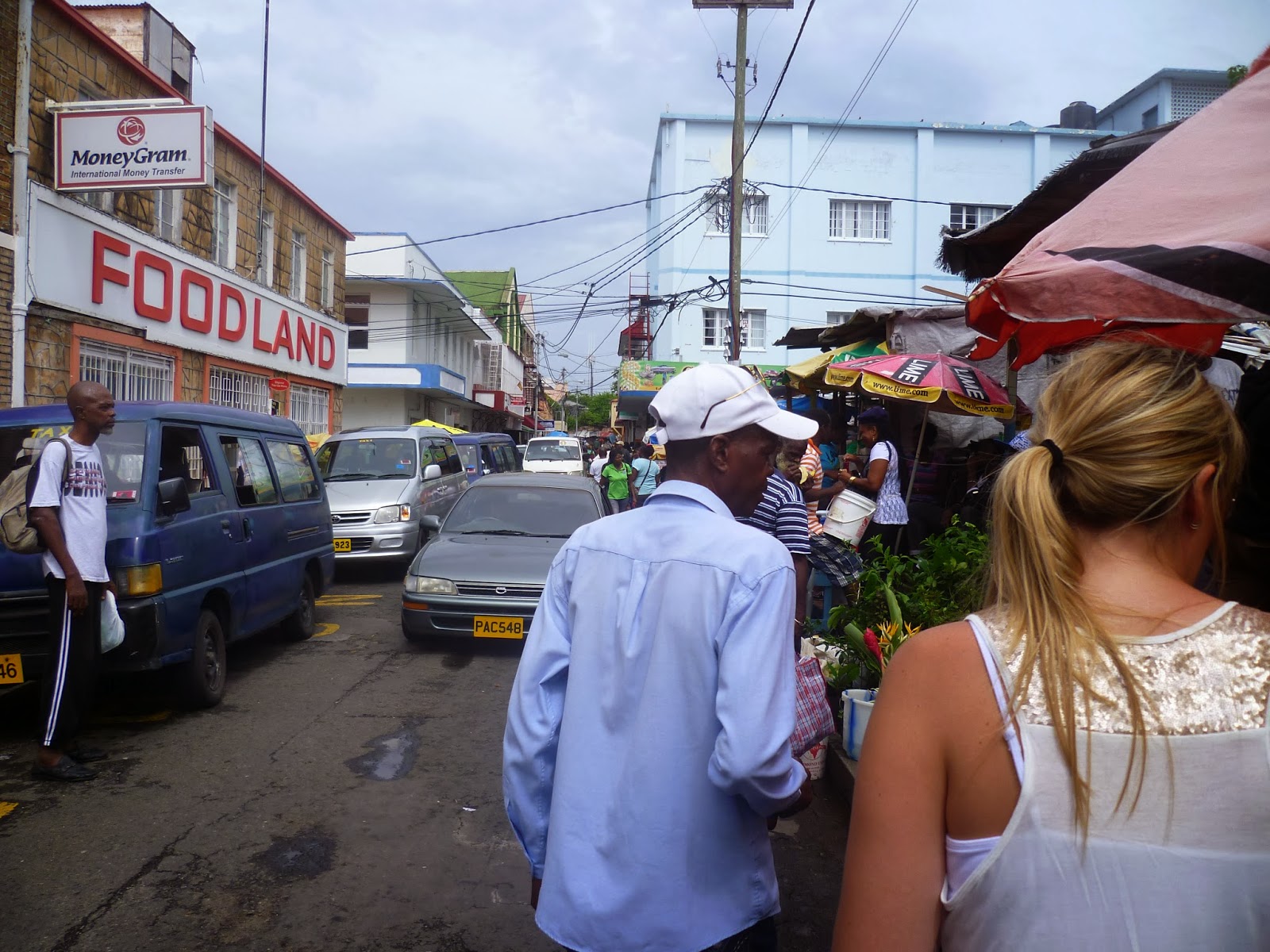 Our impromptu guide to the market, in the white hat
(I never got his name) 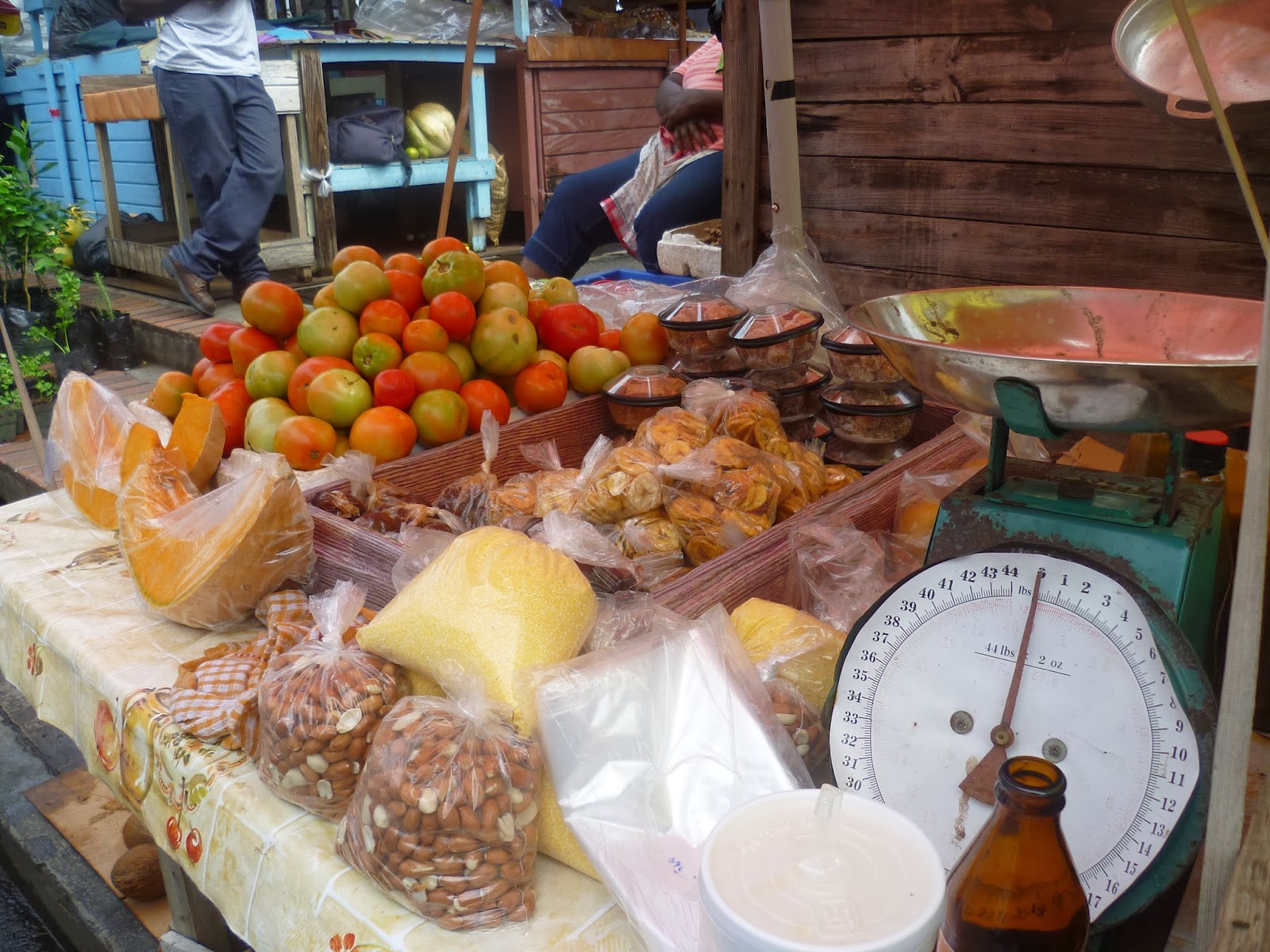 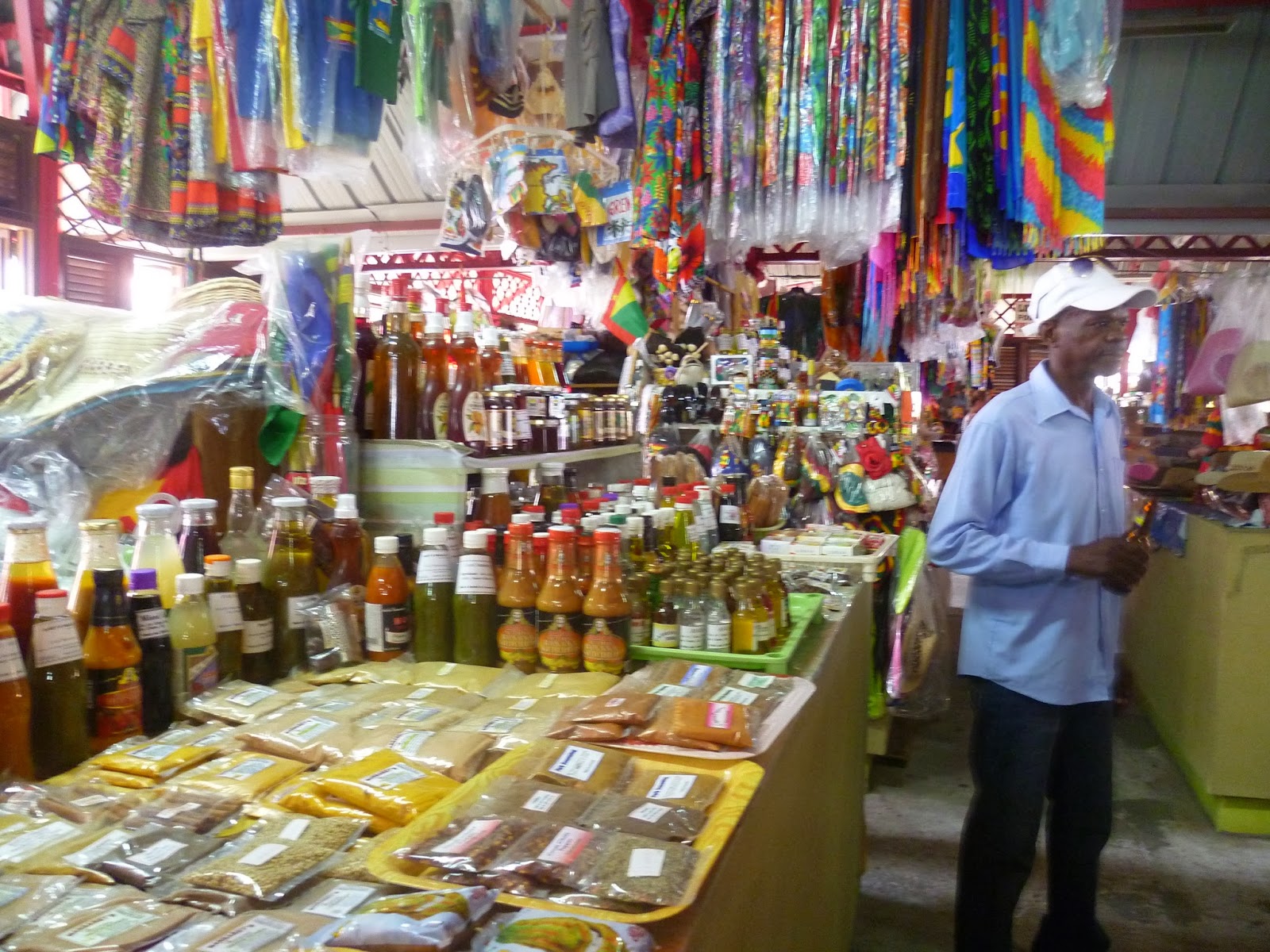 Local manufactured and processed goods in the indoor stalls 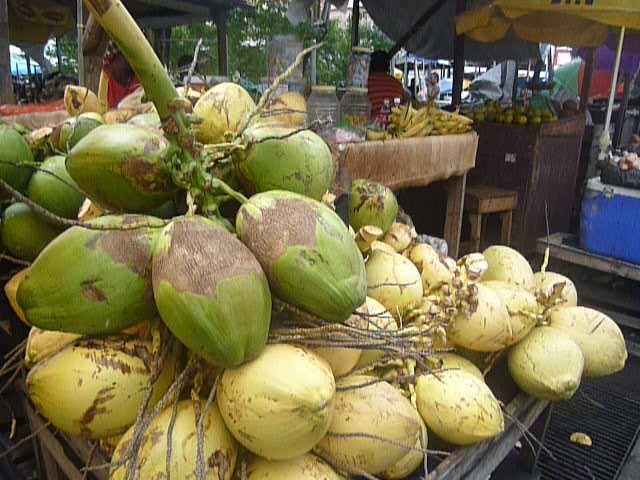 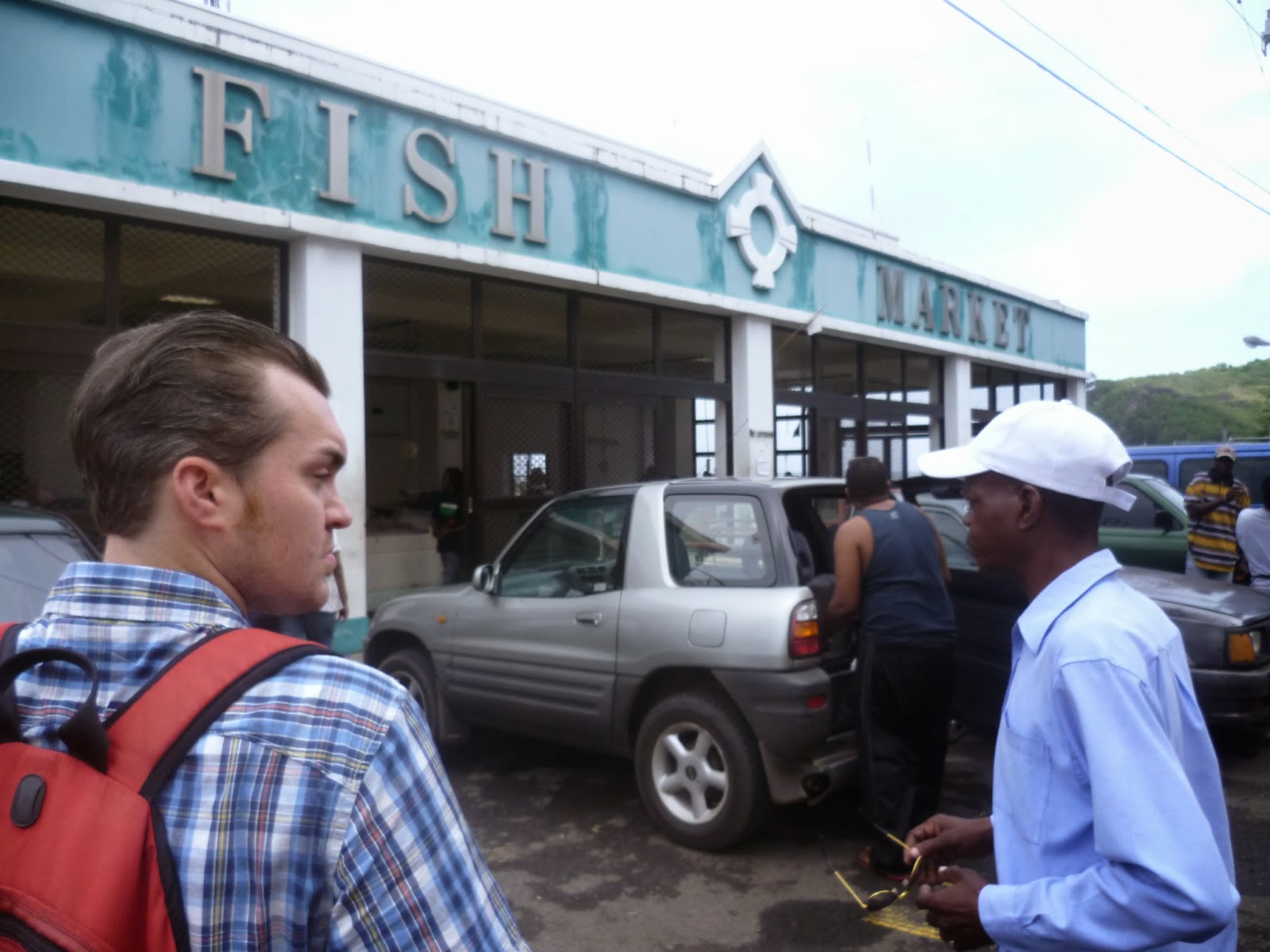 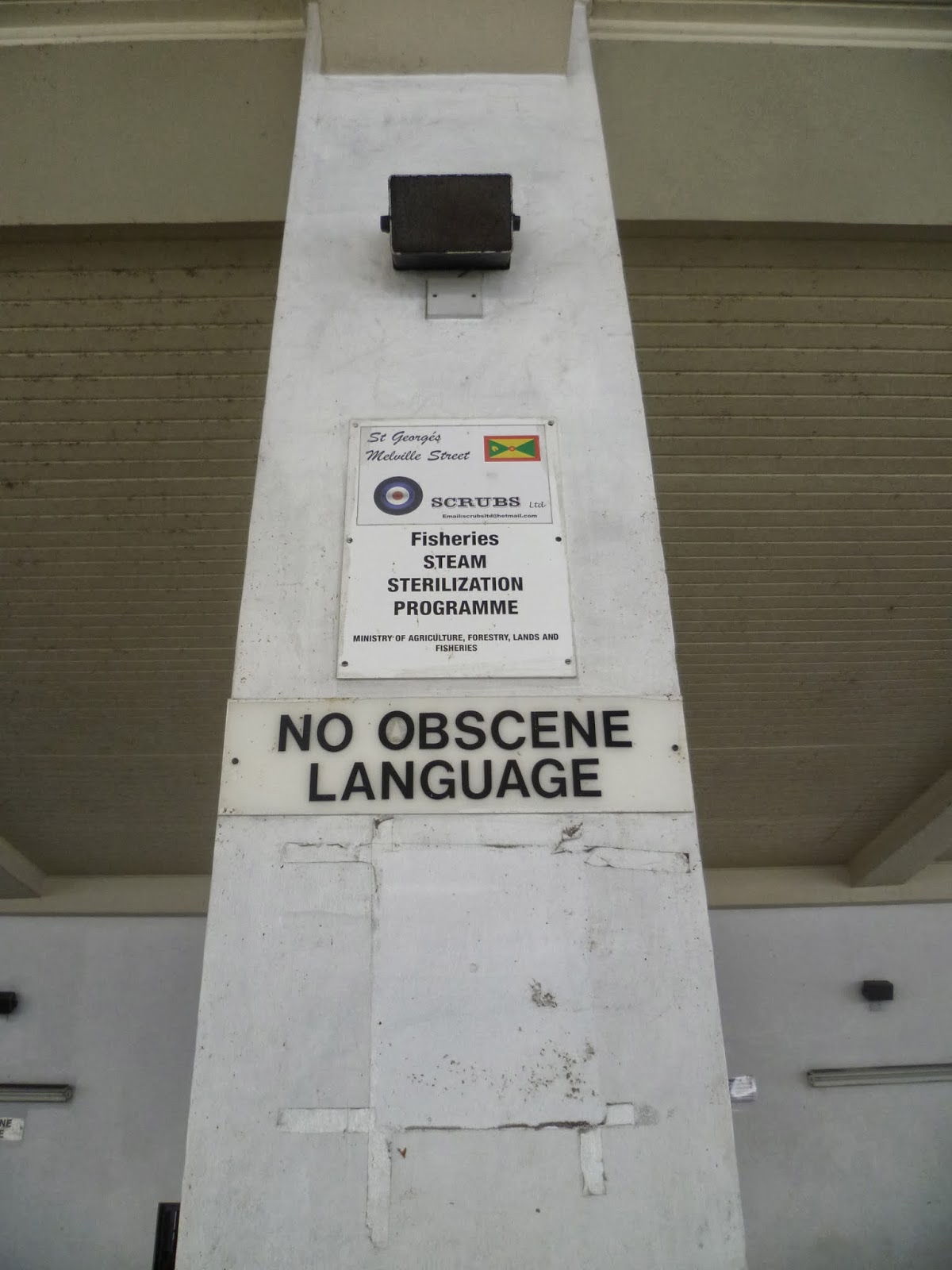 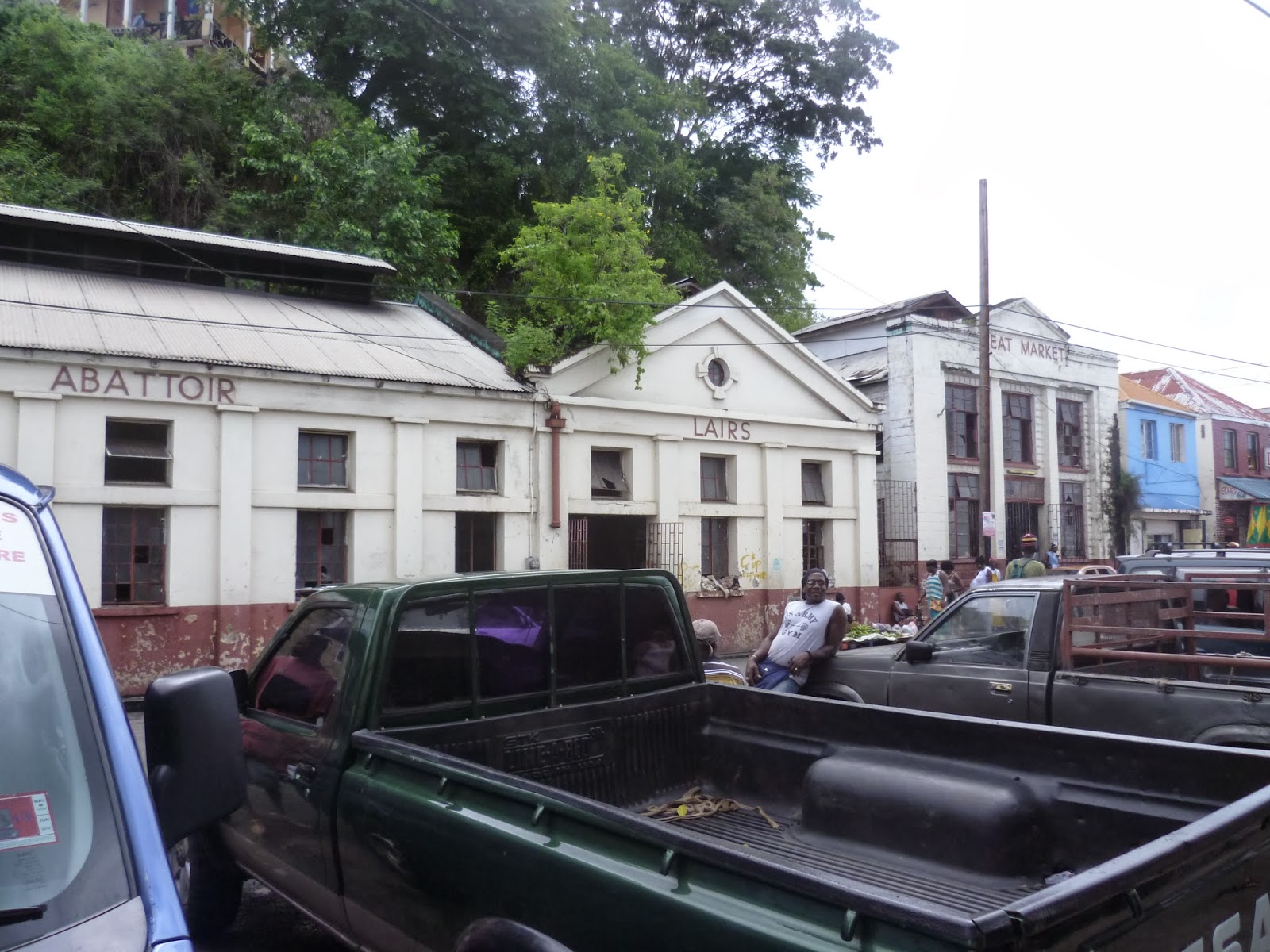 And across the street from the fish market...
really REALLY fresh meat 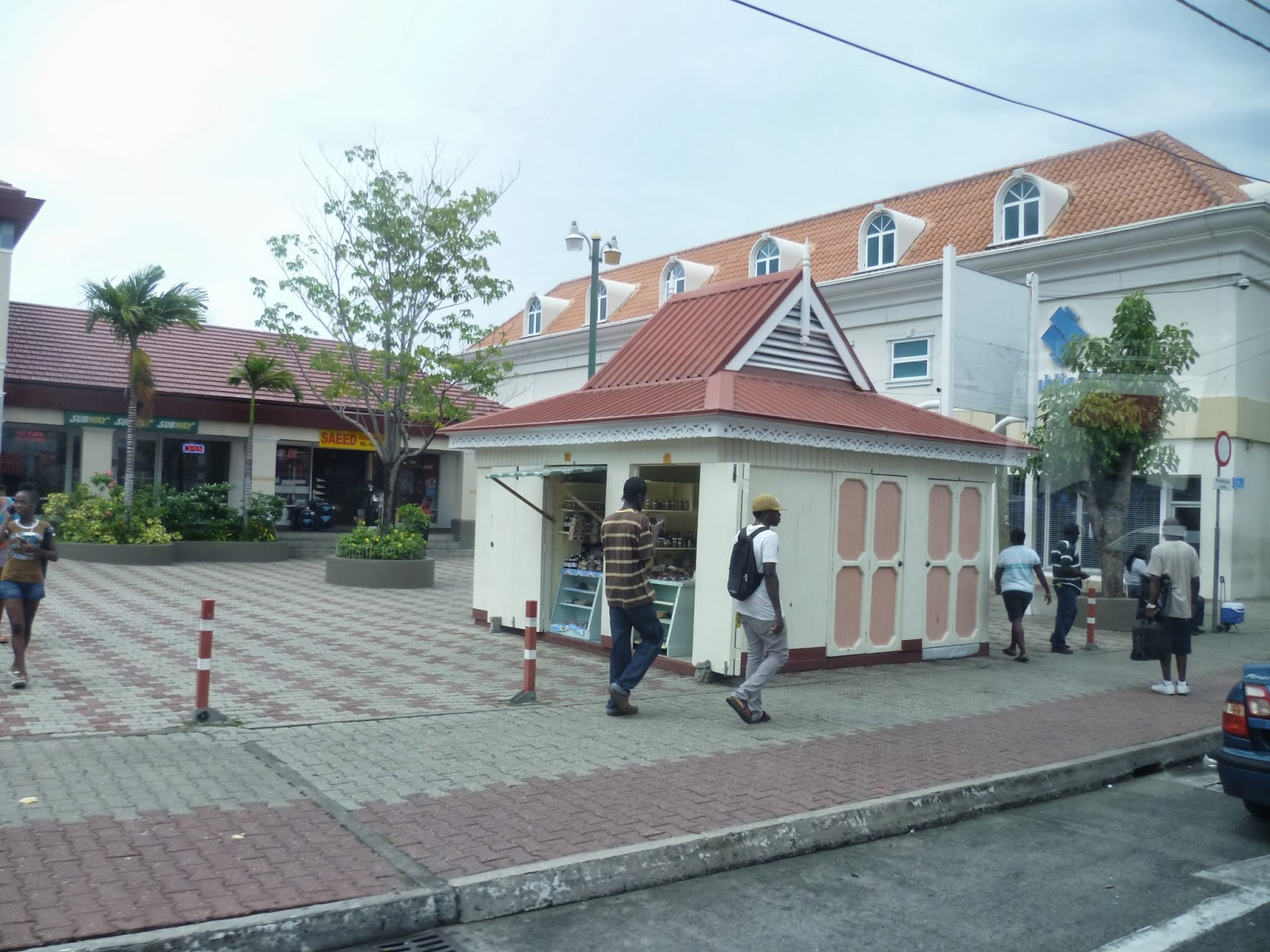 Just outside the cruise ship terminal

I buy a few small things here; some turmeric powder, some cocoa balls to make hot chocolate the way they do it here, a magnet to add to my travel magnet collection on my fridge, a calabash bowl. Everything is so cheap! And I would love to try some locally prepared food but no one else is hungry so we pass the tempting aromas by. It is interesting to note that there are very few tourists at this market, today at least; it is all islanders shopping their weekly grocery list.

We give our guide a few dollars each for giving us the tour and head back to the terminal to check out the stores there again for things the market did not have. I buy a t-shirt for myself and then wander about and discover a Columbian Emeralds store. Oh-oh!

When I was in the BVI in 2011, there was a Columbian Emeralds store in Road Town and they had a little display in a window over in Long Bay at the resort. There was a necklace in that display that I just loved, a small diamond covered palm tree. The price was $499 US and I agonized for a few days whether or not to splurge on it for myself and finally decided not to.  Once I got home, I thought about that necklace frequently and wished I had bought it. I even called my brother in law, a jeweller here in Vancouver, to see if he could either get me one like it or manufacture one for me. He couldn't find one and the cost to make it would have been way more than buying the one at CE so I never got one. Now, here I am, and there is the store.

I go inside and ask about the palm tree necklace. She shows me one but it isn't it - this one is more stylized and has fewer diamonds overall but three larger ones for coconuts. The other one didn't have coconuts. It is $100 less than the one I want.  I describe the other one to her and she knows the one I mean and says that they only have it in yellow gold with emeralds and gets it for me but I know that I don't want that one, I want the one with white gold and the diamonds. I hem and haw and finally decide to get this other diamond one. It isn't the one I really wanted but it's cute and it's a palm tree in white gold so... I put it on my credit card. It's a bit of an ordeal buying it because in order to get it tax free, I have to produce my passport, my return airline ticket and I don't have either with me. I end up giving her my airline and flight date and time and she works with that. I am anxiously watching the time but get out of there just in time to not be left behind by the van.  In fact, two guys are about 5 minutes late and we wait for them so I needn't have worried so much. 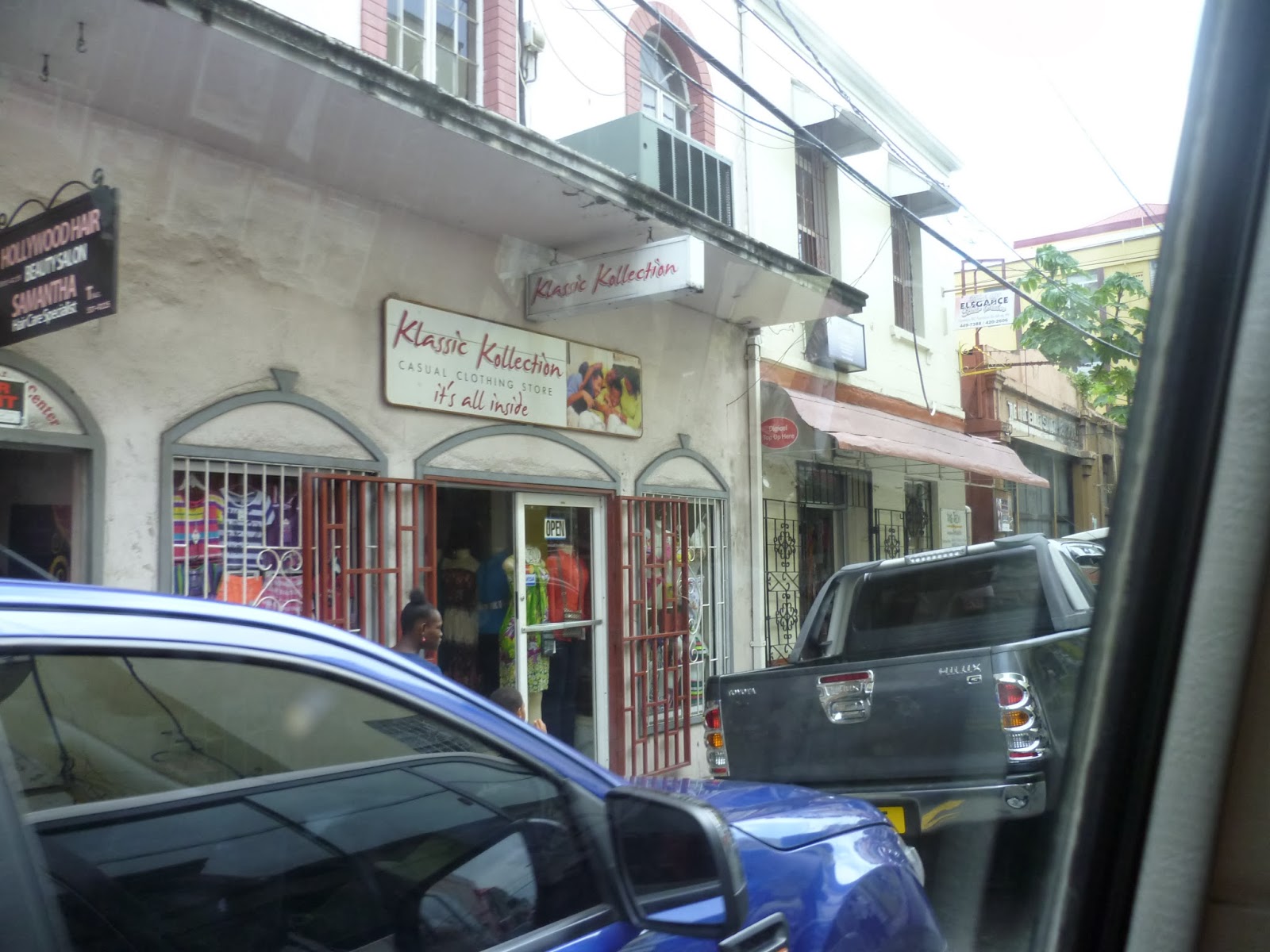 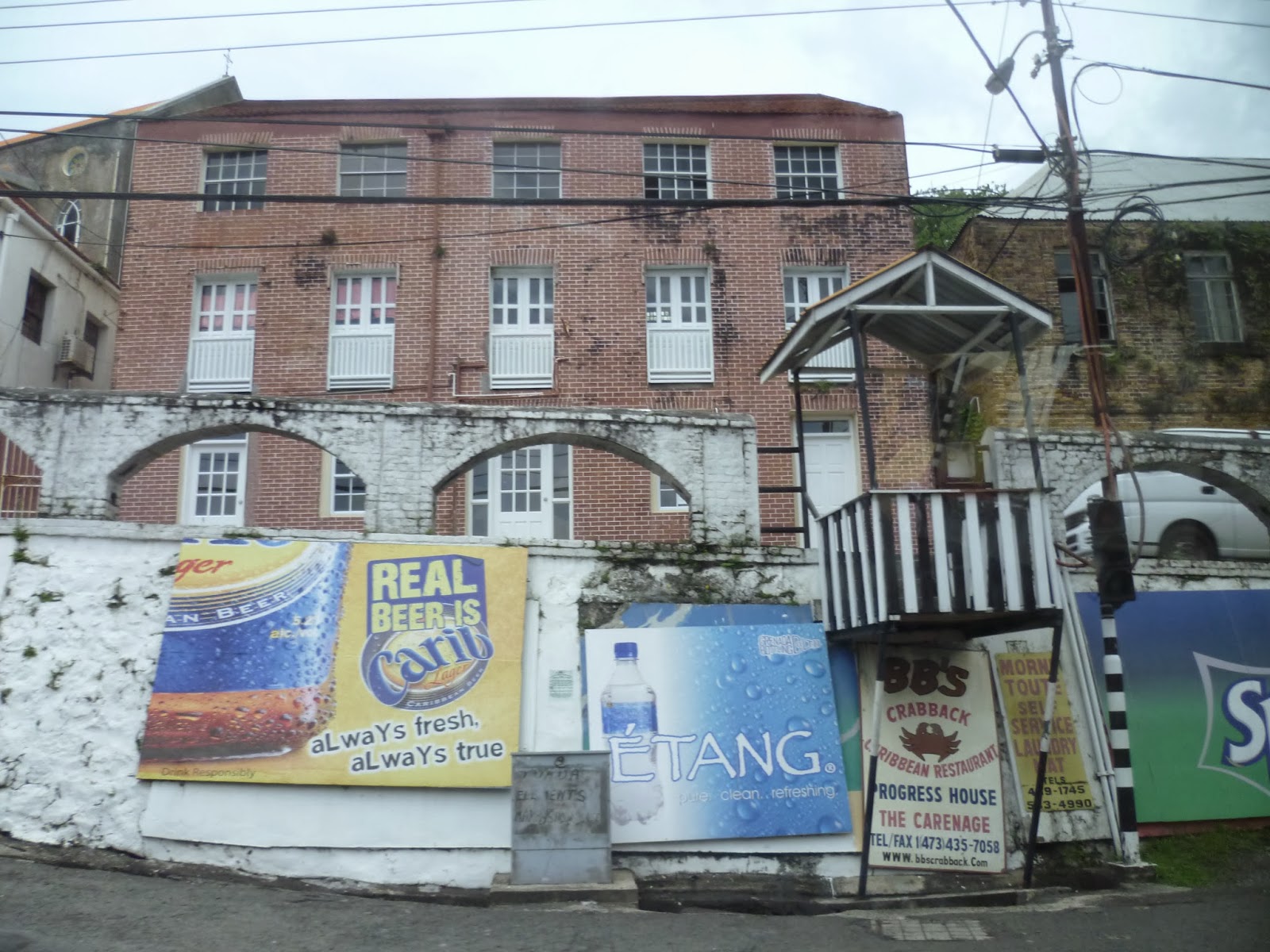 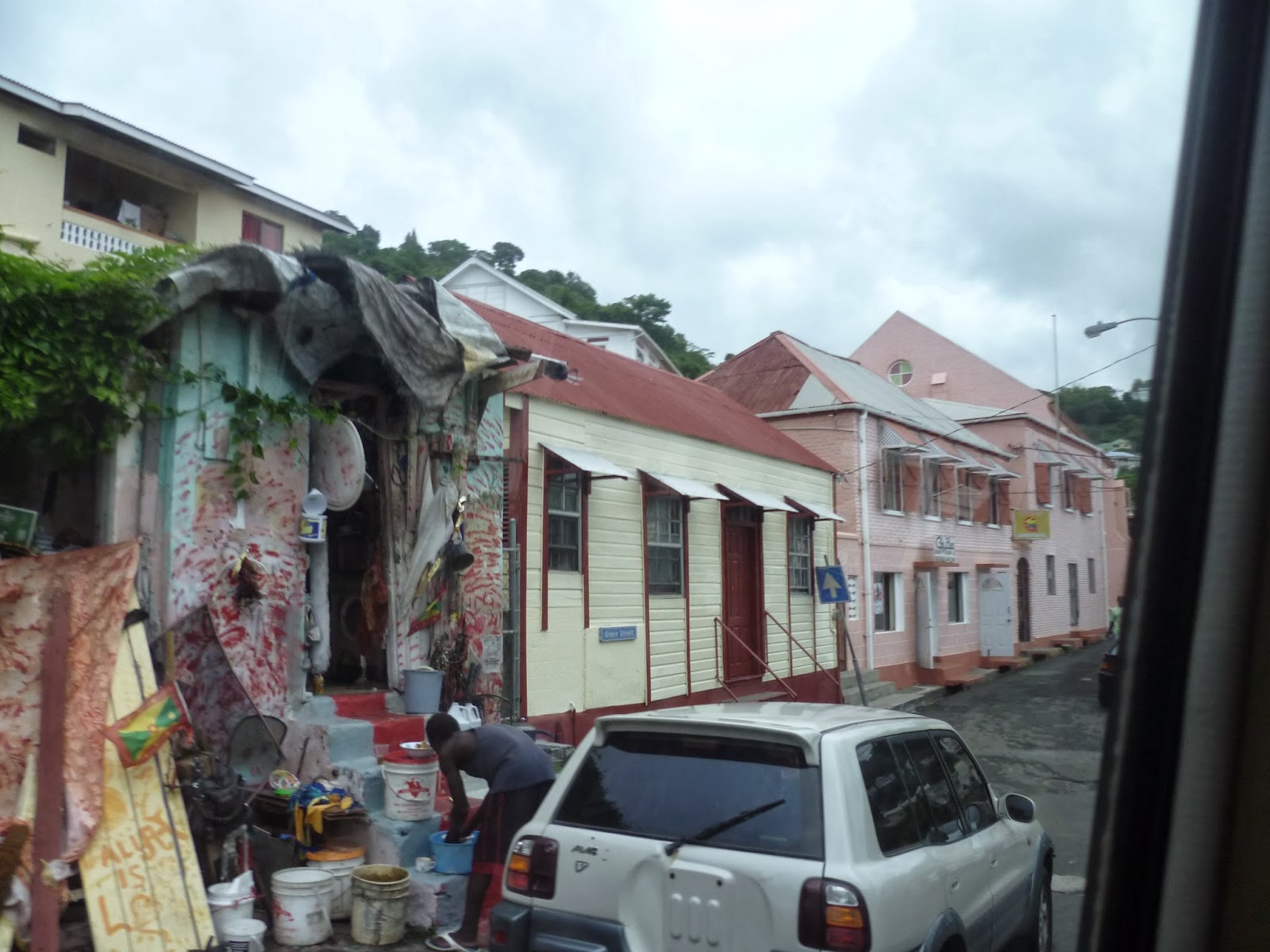 We stop in at Port Louis Marina on our way back. Not sure why. We are supposed to be stopping by a local craft mall but I guess we are doing this instead. I have already been here on Rick's boat so there's nothing for me to see, thus I head to the bar and order a Ting - I am hot and very thirsty. The couple I've been with most of the day join me and we have a nice relaxing half hour together with our driver. 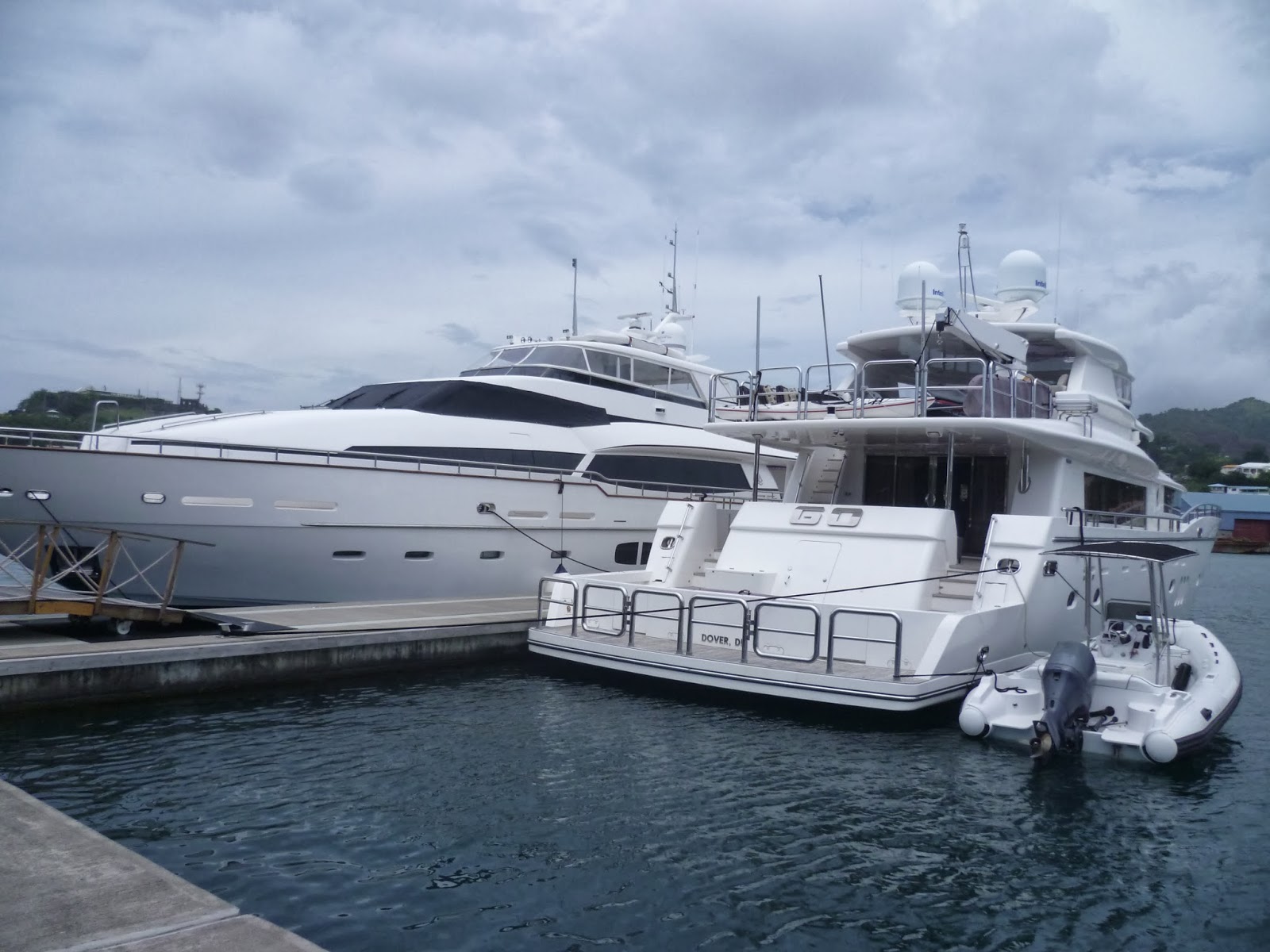 I am back in my hotel room by lunch time so I change and head down to the beach and to SAVVY for lunch. I order their chicken roti that comes with an actual salad, albeit on the small side, with nutmeg dressing that is amazing. The meal is very tasty. 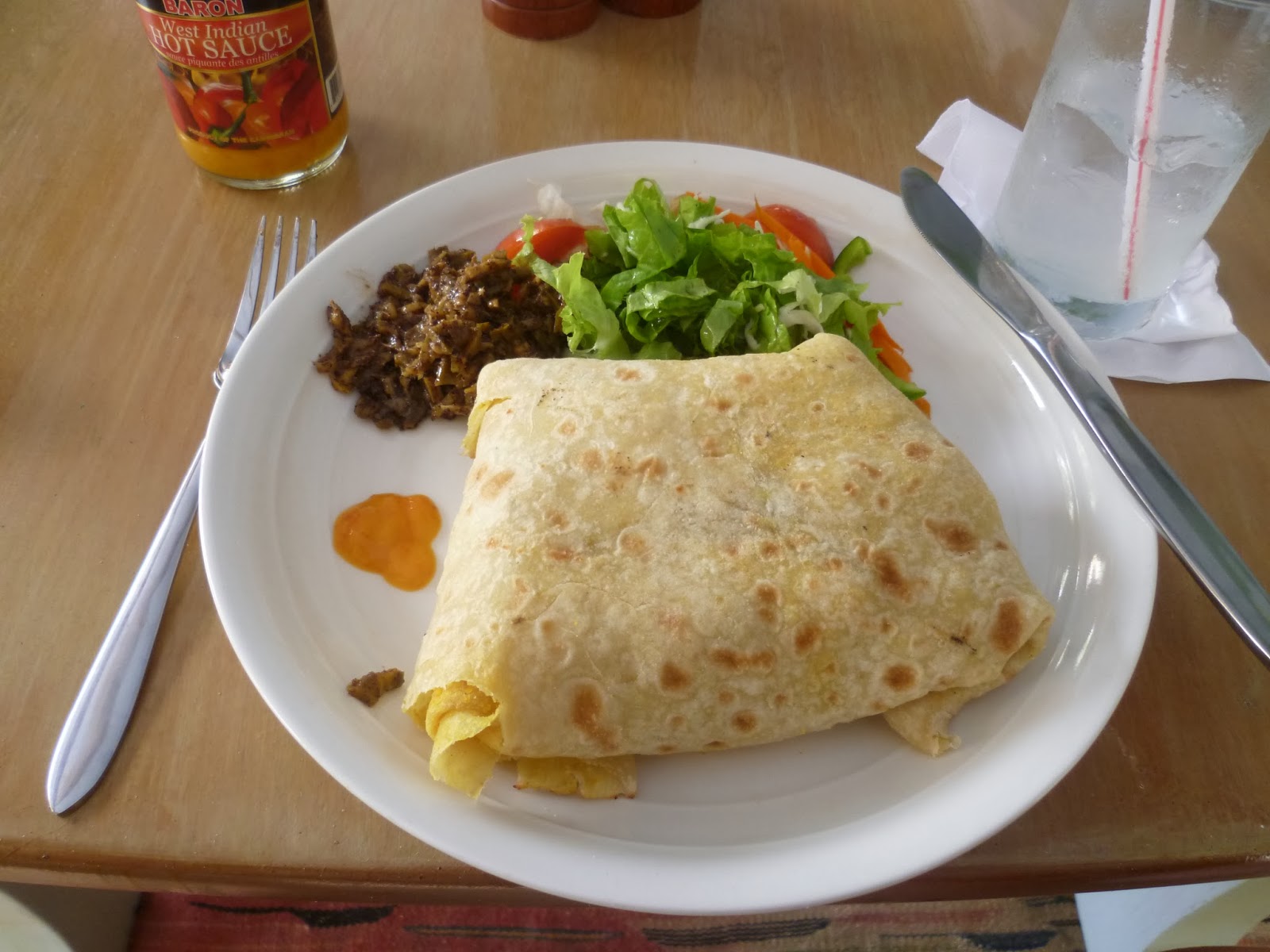 The staff here mistake me for a guest and so I am handed two beach towels by a fellow, one for me and one for my husband.  I don't bother to correct him and move outside to sit on one of the lounges for a bit. I want to go in for a swim, once I get too hot, but the waves here are so rough that I decide to walk down to the Allemanda and swim and sit there. 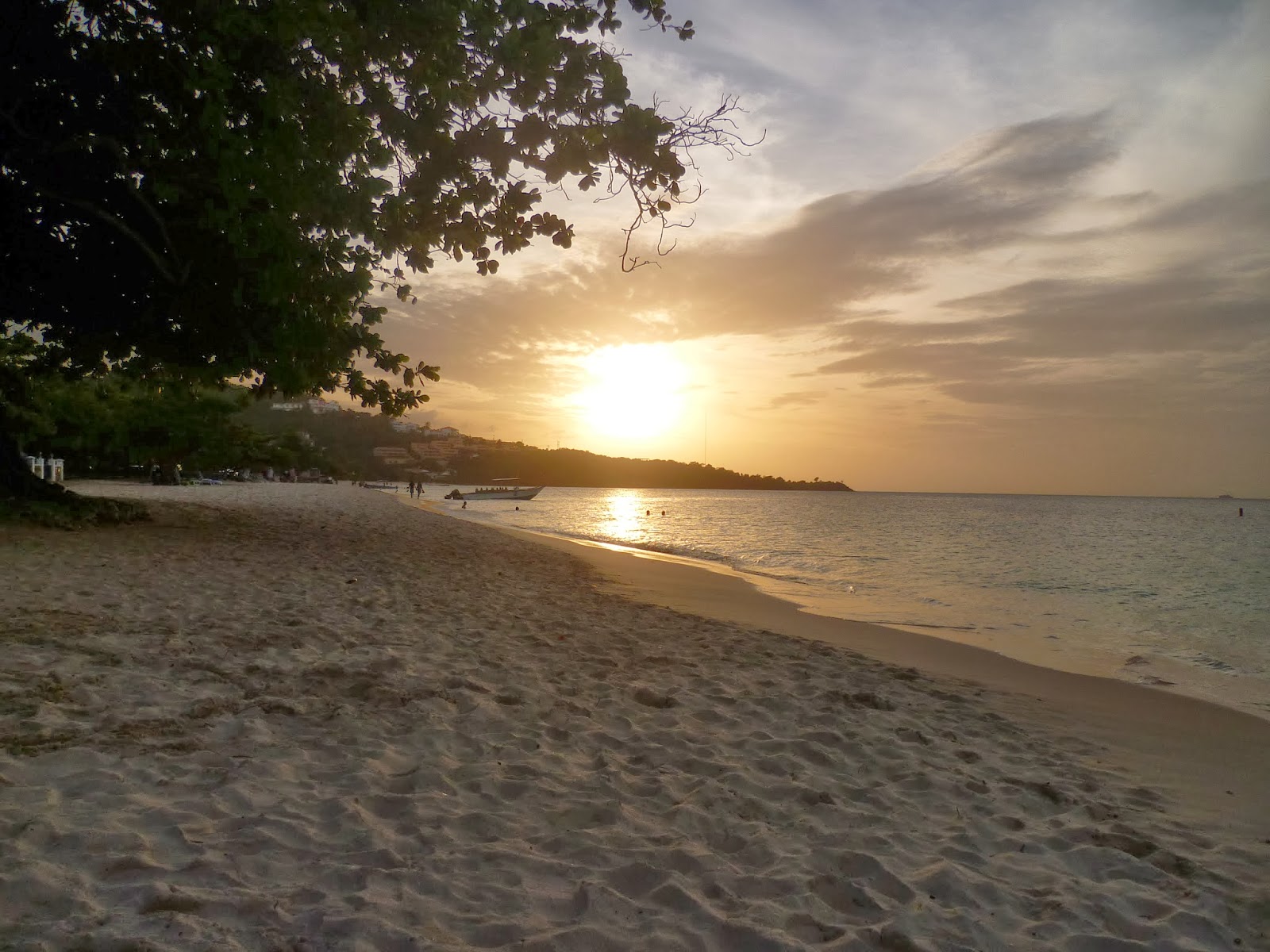 Pretty sunset - time to head back to my hotel

I head back to my hotel and as I do, who should pull up along-side me but, yep, Tom the taxi driver. I ask him if he is stalking me and he seems taken aback and emphatically declares 'no!'.  Good. He asks me what I am doing tonight and I honestly answer that I don't know - maybe look at a new restaurant. We chat briefly and he drives off without asking me out, which is a relief.

I stop by the pool to sit with my feet in it for a bit. I decide it is too much hassle to go out tonight - taxi etc. I really wish I felt safer walking the roads, then I'd go to Umbrella's for dinner but it's not just people I am afraid of - actually it isn't EVEN people I am afraid of, it's the darn crabs that populate the edge of the roads. I was told they walk all over the road at night in the dark and I have seen evidence of that in the morning - flattened crabs.  I don't want to risk being surrounded by them in the dark!

When I get to my room, I remember I have nothing left in the fridge to drink.  Rats!

Posted by Sandy Montgomery at 8:41 PM No comments: