So I arrive in Orlando, Florida on time and David is there waiting for me. He looks a lot older than the picture on his website but, whatever.
Once we are in the truck and underway, it comes up that the sail from Guatemala to Florida will be five days and nights STRAIGHT THROUGH, no stopping. That means I will have to take turns on watch for three hours at a time while he sleeps. My blood freezes. I thought I made it clear to him that I had only been a recreational boater, and 20 years ago at that. I am in no way prepared to do a night watch way out in the ocean with the freighters. They can't stop or turn on a dime so, even though the catamaran would be on autopilot, one has to be vigilant and be ready to change course. I am not ready for that. He is as shocked as I am. Neither of us had thought to ask the question although, to be honest, I thought I had but realized it was the other guy, in Mexico, that I had talked to about it. He had assured me that we wouldn't be doing any night sailing for the first few months at least and usually not at all as he didn't like to. How I never asked the question of David I don't know but I hadn't and so now we both are not happy.
Trying to fight down the despair and panic that is welling it's way up from my gut, and failing miserably, I don't have much to say on the way to Tarpon Springs where we will be staying at a home of his friends who are away in the Bahamas. He asks me, at some point, what is on my mind and I say something about trying to figure out what I am going to do from here. He tells me that he has a friend in Guatemala with his own boat down there who is thinking of coming along on David's for the trip up and he will give him a call tomorrow to find out if he will come along. If so, then all is ok. If not, the trip is off. Understandably, he can't take the risk with a boat worth half a million dollars, not to mention our lives.
After driving what seems like f orever (3 hours) we arrive at the house which is spacious and filled with glass artwork and sculptures. Turns out the people who own the house are both lawyers and she made a million in bonuses alone last year. Why is it that people with that kind of money rarely have the taste to go with it? The dark teal walls and plum leather couches clash in the worst way. The light wood dining suite has 10 chairs with upholstered seats in a faux leopard print and a chandelier above that is dripping crystals the size of pears and looks more like it should be hanging in a grand entrance hall. It is too dark out to see the grounds but I can hear waterfalls. Just outside the kitchen door is a big patio and I barely make out in the dark that it is entirely screened in. The next day, driving to go see a utility trailer that David wants to buy, I realize that the screened in porch or patio is not unusual, almost every home has one. The bugs must be really bad here.
I have a cup of tea and go straight to bed, once I get all my stuff in my room and check my emails. It's only 7 o'clock at home but I am exhausted from the travel and the stress of trying to figure out what I will do if the guy from Guatemala doesn't want to come along. Going home with my tail between my legs is not a very attractive option. Also I now have no home and no car there so I wouldn't even know where to go from the airport.
I am one of those few people blessed with the rare ability to drop off into sleep as soon as my head hits the pillow, no matter what is going on in my world. Tonight is no exception and I fall asleep instantly.
I wake up about 8 and the sun is shining and it is warm. I remember what is going on and I immediately feel sick to my stomach. I head to the bathroom and pretty much am trapped there for the next hour as my nerves have their way with my insides.
When I finally make it into the 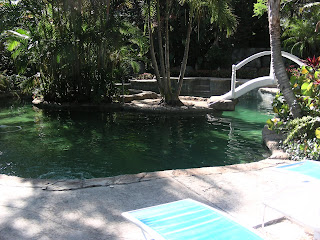 kitchen, I can now see the grounds of the house and they are stunning. There are waterfalls everywhere; one inside the screened porch, one just past the large pool that wraps its way around a little island that houses the hot tub and is connected to the deck with a white bridge, and one through a grotto of palm trees. The vegetation is lush and fragrant as I step outside for a closer look. I can't wait to try out the pool. It isn't the aqua blue of most pools but rather a bit greenish but perhaps that is because it is a cement pool and made to look more natural. I dip my toe in and the temperature is so perfect.
I spend most of the morning on the computer, emailing friends with my situation and asking them to PRAY for me so that I might have some direction as to what to do next. At David's suggestion, I take another look at the site I found him on to see if there is anyone else around here looking for crew... there are but none are suitable. The morning passes quickly and after a lunch of quesedillas we change into swim wear and head outside to relax in and around the pool. I swim the circle around the island, under the bridge checking overhead first for spiders (there are none) and just float and let the warm water and sunshine do their magic on my stress. It works fabulously. I get out and sit on a lounge beside David and we both read in silence for a while then he puts his book down, Sail by James Patterson (an author I read avidly but haven`t seen this book yet) and he comments on how it is not a good book for me to read. It is about a family that go sailing and get into trouble. He comments that perhaps he isn't so keen on sailing through the night after reading the chapter he just finished. We laugh. I hope he is serious but he isn't.
We have a great talk about some of his past and some of mine. He seems like a super nice guy and the more I talk to him the more I really want this to work out somehow. After a couple of hours in the sun, we come in and change and head out to see the trailer that he wants to buy to put his new Goldwing motorcycle on to tow behind his motorhome when he travels across the states. We drive a long, long way. He points out Tom Cruise's house nearby where we are staying and it is HUGE! We never make it to the trailer as it is taking too long and the guy has somewhere to be so we call and say we will go tomorrow instead. We turn around and on the way back we stop for Mexican food. It isn't the best I have ever had but I am hungry and it is good. David has two rum and cokes with dinner and apparently they are mixed very strong so I am worried about his driving home but he doesn't seem to be. He drives back without incident, other than leaving the signal on every time he uses it to change lanes but he's been doing that all day so it isn't the rum, and he is in a jolly mood, making jokes all the way. He's a fun guy.
At some point in the afternoon, David calls his friend in Guatemala to see if he will come along on the sail. He won't commit. Apparently he has a 21 year old Guatemalan girlfriend who looks like a model and is reluctant to leave her for even a week. He is in his late 50's. Ugh. What is it with some men? Anyhow, still no idea if I am going on this sail or not.
When we get back to the house I get on the computer for a bit and David turns on the GIANT TV. Once I am done on the 'puter, we watch a show where some guys take Leonardo DaVinci's drawings and build whatever it is. This episode is about building a huge circular tank with about 40 small cannons facing in every direction. Very cool. I had no idea that DaVinci first came up with the idea of ball bearings. Nor did these guys and they are relieved that they can use them in the wheels to hold up the huge structure. It's over at 10 and I head right off to bed. I watch the latest Survivor that I have downloaded onto my computer and then fall into a deep sleep.
Posted by Sandy Montgomery at 11:19 PM 1 comment: