IT NEVER RAINS BUT IT POURS

It's been raining for a few days on Tortola. Here's one of the the results.

It's suddenly pouring in my life as well.

I got a text from Kim, my DP (Director of Photography) friend who just took two shows with Reunion Films. He's really excited about doing these movies and his text was to tell me that they still don't have a script supervisor. He gives me the name of the PM (Production Manager), someone I worked for a few years ago, and so I send off an email to him with my resume. About an hour later Kim forwards an email to me that he sent to the PM recommending hiring me.

I get a call the next day from the PM and he sets up a meeting with the Director for this morning. I make a mistake when setting my alarm clock. I had unplugged it and so when I reset the time, I set it for an hour later than it actually was. So I got up at 5:30am thinking it was 6:30 to leave by 7:30 for a meeting in North Vancouver for 9:30. The traffic wasn't as bad as I anticipated so it only took an hour to get there. On the way I discovered my error (when the radio DJ announced the time as 'twenty to seven') and so I was two hours early. I went to McDonalds and had some breakfast and read the newspaper for an hour and a half and then showed up to the meeting early. I sat in the board room and read the script while I waited for the Director, who had not been informed of the meeting so was half an hour late. 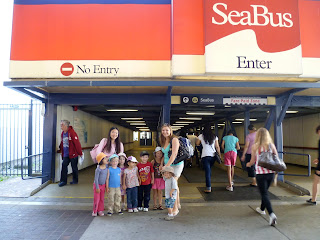 We had a great chat and at the end he said 'Well, that's great." I was expecting a, "We'll let you know." but instead got a "Welcome to the crew." I was elated.

After a lovely afternoon with my daughter and her charges at the daycare, having lunch at a park after a 'field trip' on the SeaBus, I headed home.

I doze off in my chair while reading the book I forgot to take with me this morning, and the phone wakes me up. It is a producer from a show called Rise of the Apes and he wants to know my availability. In a bit of a sleep fog, I dimly recall seeing the name of this production somewhere recently. I reply that I just took a show today. He asks me what the dates are. I tell him. He says that they conflict and thanks me and that's that.

I mull over the name of the show. Rise of the Apes. Hmmmm. So I get on the computer and check the latest production list from IATSE, the union that does the big shows. Sure enough, there it is. It's a HUGE show. HUGE. As in, I-have-never-been-on-such-a HUGE show. I agonize as to what to do. This is a fabulous opportunity for me. I see on the list that there's a script supervisor already so this means second unit. I comment on it on my FaceBook page and instantly get comments back from friends in the industry. Basically they all tell me I am crazy if I don't call back right away and beg to be on the show.

So, after much agonizing, I call. I ask for a few more details and then agree to send in my resume. I will leave it up to God. If they call me back offer me the job, then I will take it. Maybe. I just don't know what to do! I really don't want to back out on a show I have said I will do, that's just not cool - and I really like this PM so don't want to burn a bridge with him. AND I have a wedding to not only go to on August 13th, but I am doing the bride's hair and makeup as well as my daughter's, one of the bridesmaids. If I get this, I won't even be able to go to the wedding. I can't stand the thoughts of that. So I will wait to see if they even call.

They just called. I'm going in for an interview tomorrow afternoon.
Posted by Sandy Montgomery at 7:25 PM No comments: