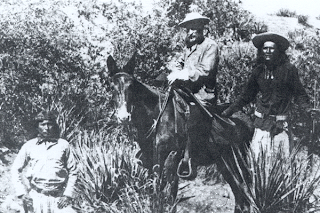 As I stood out in the barren desert the other day, listening to nothing but the wind whipping about my ears, I looked around and tried to imagine what it would have been like to come upon this vast expanse of flat valley, over a hundred and fifty years ago, after traversing the mountains in the distance... on horseback, with only the food and water I could carry with me.

It struck me how brave people were back then. What absolute raw courage - guts - it took to up and leave civilization and set out for, literally, parts unknown.

At this point, let me just say that I have had a few people tell me I am courageous for taking this trip on my own and perhaps, in light of todays feeble civilization of people who would rather watch someone else have an adventure than get up of the couch and have one of their own, it could be considered courageous for a single woman of my age to set out on a trip such as this alone, but I hardly think it is. And I don't feel one bit courageous, in fact I feel like the biggest cowardly traveler on the face of the earth sometimes. I am always afraid of losing my wallet, of someone stealing my purse or pickpocketing it, of being late for my plane, of having security pull me over and go through every scrap of content in my bag and refuse half of it and it takes so long I will miss my plane, of there not being enough room on the plane for my carry-on so it will get checked and then lost, that I will get lost once I am off the plane...stuff like that.

But to come across those rugged mountains, after who knows how long an arduous a trek up to then, and see nothing but dry, rugged, scrubby, cacti filled desert stretch out miles and miles before you, vanishing into the heat of a hazy horizon... I can't imagine, but to me - that is real courage. At least this valley has a river so that had to be encouraging - they weren't going to die of thirst, which I am sure happened all too often. But how many dry valleys did they traverse before they got to this one? And how did they sleep out in the open at night, what with the creepy crawly things that live out here - snakes, scorpions, HUGE spiders, lizards. Not to mention the bigger creatures, if there were any. 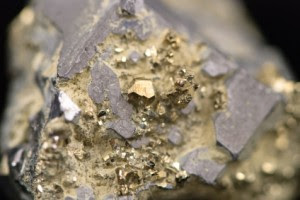 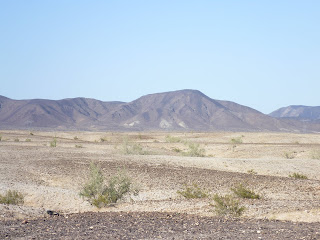 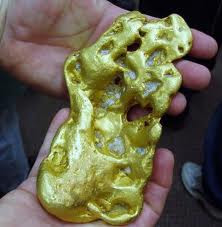 And the mountains themselves - well, as the famous line says - "There's gold in them thar hills" or there was. Eventually, the mines of Yuma County produced a total of about 771,000 ounces of gold through 1959. But before that, there were prospectors who came on horseback and searched for gold, ledge by ledge, stream by stream. And had considerable success.

There's several stories of lost or buried treasure in these parts:

- The massacre of the ferrymen at Yuma Crossing left the fortunes of the ferrymen buried somewhere near the ferry. It is reported to be in several caches and amount to $50,000 in silver and between $20,000-$30,000 in gold.

-A rotting wagon with 15 sacks of rich gold ore was found by James Hurley. He took samples to have assayed, but when returning for the rest, he could never find the wagon again.

-A rich gold placer was found by a prospector in the desert south of Topock, who gave some of the nuggets to a railroad conductor. The man returned later with his son to assist in working the mine. Both were found dead south of Topock, killed by Indians, but the Lost Placer was never found.

-Somewhere in the Tank Mountains, north of Yuma, is said to be Camel's Tank, a tank of natural water that had gold nuggets laying around the tank. It was found by John Gordon and Juan Perea, who took a load from the site, but could never relocate the tank again.

-A rich ledge of gold is said to be located in the Little Horn Mountains. Poncho (a Tonto Apache) gave a large sample to Jose Alvarado in appreciation for Jose taking care of his son during an illness. Jose died before ever visiting the ledge. (There's several stories like this one, where the person died before they could go back).

-A streambed of gold nuggets, found by a Mexican girl and Papago Indian boy enroute to Gila City, is said to be located near Tule Tank in the Cabeza Prieta Mountains.

-A "sizable fortune" is said to be cached near the Rancho de los Yumas by William B. Rood. A can with $1,000 was found, but much more is expected to have been buried.

The rest of the state has even more stories and you can read about them here.

I'd love to get out in those hills and turn a few rocks over and see if I could find any gold. As a teen I read several books about prospecting in days gone by and of lost treasure that remains to be found in places just like this. It really caught the spark of my imagination and I loved the idea of setting out to find some of it. Being here has rekindled that spark.
Posted by Sandy Montgomery at 9:05 AM No comments: