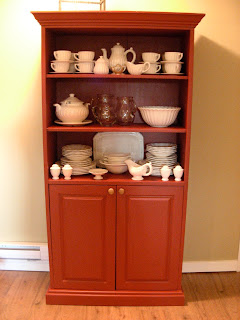 Yesterday someone came to take a look at the bookshelf I have on Kijiji and she liked it... it matched the red for her son's room perfectly. She called later to ask if I would take $125 for it and I said no. I paid over $700 for it new, albeit 15 years ago, and I am asking $150. If twenty five dollars keeps her from buying it, then so be it.

I call the agency that hired me for the Olympics to find out just exactly how much work I can expect and I find out that the job they hired me for, supervisor of resident assistants, is no longer mine as VANOC went and hired a bunch of kids to do that job. So now I will be a supervisor at a 'staging area'. This means that buses with athletes, their families, or spectators will need to have various drop off and pick up places around Vancouver. Each of these areas is called a 'staging area'. I will supervise the crew at one of these spots. Not sure what that will look like. Will I have somewhere to go out of the rain and cold? I guess we shall see.

I also found out yesterday that the apartment on English Bay that I was hoping to sublet won't be available as someone had spoken for it earlier for more money. She hadn't heard back from them so wasn't sure they would take it but now she has talked to them and they are. So was wondering where I would be living at the end of the month. But I just heard from my friend Denise who I stayed with for five months last year and she said I could stay with her again as her daughter has gone to Europe until August. So that is GREAT news as I loved living there and I love Denise. She has been just the best friend to me through all of this.

Speaking of good friends, I dropped off a minivan load of boxes to my friend Fran's house on Saturday night. She is going to store stuff in boxes for me in her crawl space. So now I just need to get more packed so I can take a load up this weekend. I need to get motivated.

Because I have no idea what I will do when the Olympics are over I have been exploring a couple of options. One that has opened up, due to still having a profile up on Findacrew.com, is a boat that is in the Caribbean and plans to be there for several years. Right now it is in St. Thomas but is heading down to Barbuda and Antigua for the annual races in April. I have been emailing the chap, who is from Scotland, and he would be willing to wait for me in Antigua before carrying on to ports farther south. It is extremely tempting and I will give it serious thought. I still really want to sail the Caribbean and I am not getting any younger and can't see doing it any other way. This guy is super laid back and likes to take the journey slow and stay as long as one is enjoying the place so that sounds like a great match for me right there. I hate moving on before I have had my fill.

I am also continuing talking to the guy from Mexico who wants to sail down to Ecuador but I am still not sure about his itinerary nor his age. He's in his seventies and that worries me. I don't want to be out in the Pacific with an incapacitated (read, dead) captain and have to bring the boat in alone. Not at all.

I also found out that the likelihood of me getting a settlement from the mall is slim to none. I spoke to a lawyer on Friday who recommended a personal injury firm in Vancouver and he said that if they passed me off to someone else, then the chances of my winning in court was slim. They passed me off. So, very reluctantly, I guess I will just drop the whole thing. It is very frustrating to me because it was a hard fall, I did have injuries and the concussion took a lot out of me over the summer. I feel cheated and I don't like that feeling. It seems nothing is going my way these days when it comes to making some money. Not even something like this which would seem like a sure thing. I certainly read enough on line about people getting offered cash and merchandise (a 50" flatscreen TV and $2,500 cash in one case) on the spot when they fell in a store, so why not me?

Ahh well, bring it on. I will always have Palm Springs.
Posted by Sandy Montgomery at 7:07 PM 1 comment: