What Part of "I DON'T WANT TO WORK ON A MOUNTAIN" Did You Not Understand? 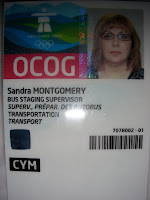 Last night I had a read through the hand-book for the games before I went to bed. It has a diagram of the HUGE ID tag I have to wear and a key to all the symbols on it. I don't have many symbols on mine. Not the knife and fork one that I assume means one gets free meals (couldn't find the key for that one but saw it on the sample pictured). Not the one that in no way looks like it means one gets to carpool, but that's what it means. Just one really. A cryptic trio of letters; CYM. I look it up and discover, with horror, that it stands for Cypress Mountain. Oh no. Not there.

When I was hired it was for the job of Resident Assistant Supervisor, where I would get to drive around in a brand new Olympic vehicle with heating that worked and pop in and out of nice downtown hotels all day. Then when VANOC went ahead and did something they had paid an agency a lot of money to do, namely hire their own RA Supervisors, I got reassigned to Staging Area Supervisor. Staging Area is a nice way of saying Bus Stop. It's places at venues and various spots scattered about where athletes and spectators can board the big tour buses to take them where cars won't be allowed to go for the duration of the games.

Not only are there many venues all over Vancouver and Richmond where events take place, there are (who knows how many) pick-up and drop-off points all over the city (and maybe the outskirts - I don't know yet as I STILL haven't had any training). So with possibly 20 or so places to pick from, I get Cypress Bowl? In the interview I was quite clear. I don't want to work at Whistler. I don't like cold and snow. I don't want to work at any mountain venues. Yet the only area I have clearance for is Cypress Bowl. My grandfather had a saying he used a lot: If there's a dinner short, I get it.

I am supposed to do a lot of paperwork for this job, I think. Scheduling, reports, that sort of thing. So I am thinking there must be a trailer or some sort of indoor spot at each 'Staging Area' to do this. But I don't know that for sure. It may be my car. Judging by the thickness of the pants I got yesterday, they expect I will be out in the cold a lot. Twelve hours a day outside, up Cypress Bowl (where I have shot several movies so know VERY well how freezing cold it gets up there this time of year) is NOT what I signed up for. Actually, and this may be at the root of my total aversion to working up there, on one show I was working at night at the top of Cypress on second unit and when my hours were done, the main unit still had a couple of hours to go. I handed in my paperwork and took a shuttle from set to the parking lot. There were over two hundred cars in the huge lot, due to two full crews on a very big show. When the shuttle drove away, I was left in complete darkness to try to find my car. I walked up and down the rows for twenty minutes in the freezing cold, squinting into the darkness and could not locate it. I started to panic. I didn't know if another shuttle was coming back, because I am often one of the last people to leave, and the main unit wouldn't be arriving for hours. To my great relief, another shuttle finally arrived and I ran to it before she could drive off, climbed in the front seat and told her she wasn't leaving until we found my car. It took another five or ten minutes of driving up and down before I spotted it. The next day I went to Canadian Tire and bought a nifty flashlight that charges by plugging into the lighter socket and has a setting where it flashes on and off so brightly, it lights up the entire inside of my car like a lighthouse. It never leaves the socket and I always turn it on once I am parked whenever I have to work nights. I haven't had any trouble finding my car in the dark since.

Anyway, an email has been composed and sent to the consultant at the agency who hired me. Summed up? Get me off of mountain duty. Please. 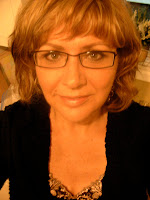 Oh - and THIS is the difference when you take a photo from a higher angle. If I get to have it redone to clear me for a new area I won't open my eyes until they slide that camera higher up the pole!
Posted by Sandy Montgomery at 9:55 AM 1 comment: