WOW!  Since the last blog post it's not just my hair that is a mess.... my whole normal world has been turned upside down and I have three days of dishes in my sink - and I have a dishwasher!!  Good thing I only eat once or twice a day!!

For those of you who haven't heard... and I am sure that's most of you... the film industry in BC is in the middle of a huge movement and it seems one person is being credited with starting it.  Me.

In actual fact, it should be whoever put the first letter on our Premier's FaceBook page and spread the word to others who posted after.  I am a reluctant activist.

I kind of fell into it.  Here's the high points as I am a bit short on time:

Our provincial government released a B.C. Jobs Plan a while back and it was recently 'dragged' into the light by an opposition member and while there's lots in the document, there was one particular quote that did not sit well with a lot of people:

Government has taken a close look at the screen-based entertainment industry as a possible focus for the Jobs Plan, and has not found a compelling case for any additional emphasis on this sector.

Now, given that increased tax incentives in Ontario and Quebec have resulted in a massive loss of productions in Vancouver as they moved to the more generous pastures of the east, that is a pretty shocking statement for our government to make.  Because there is 90% unemployment in the film industry in B.C. at the moment - you've sure heard me moan enough about me not working.

So I was on FaceBook, quite unaware of the storm that was brewing, and I saw a post in my feed that a friend in the industry had made to Christy Clark's (our Premier) FB page protesting the lack of attention to our plight. It piqued my interest so I clicked my way over to her page and saw that there were about 170 posts from film folks, some of who I know.  I read through them all, left a post with my two cents and went to bed.

Then next afternoon I saw in my FB feed another post from the same friend saying words to the effect that, 'you must have had some sort of problem with your page because all of our comments, over 400 of them, have been deleted without explanation.'   I went over to look and, sure enough, all the comments were gone and... AND... as fast as people were putting new ones up expressing their outrage, they were disappearing.  I was shocked and dismayed.  How could an elected official, there to serve the people, think that this sort of action was in any way or form acceptable?!  I thought about it a bit and decided that this was news worthy and that someone should report it to the news agencies.  I was getting all set up to do it when I saw that my same friend had just put up a post saying he had sent a copy of his letter with an explanation of what happened to several local news agencies like Global BC, CTV BC, etc.  So, I figured it had been taken care of and was ready to get back to a regular day in the life of me.... never suspecting that today would be the last 'regular day' I'd have in quite some time.

While experiencing the first few seconds of my regular day, a private message popped up from another industry friend saying that we should get a meeting together to see if we wanted to do something about it collectively.  I said 'sure' and he said... we should tweet about this... maybe #wrapchristy (wrap is the term for when a show is over) or #30,000againstchristy (the estimated number of film workers in BC).  I said no, it should be more recognizable like #savebcfilm.  He thought it was too bland.  I said I thought we should have a FaceBook page and a twitter account so we could spread the word and that the FaceBook page would be a great place for people to repost their comments if they wanted to and they wouldn't be deleted.  So off I went and blithely set both up using Save BC Film because I liked it and, heck, I was the one creating the pages.  Went back to the message and told my friend it was done and to post links to his FB page and I would do the same.

Within one hour there were 120 likes on the FB page.  Let me put this in perspective.  I have had a page for this blog on FB for two and a half years or so.  I have 85 likes.  85.  So yeah.. I was somewhat surprised.  I went on about my regular day and later that evening, went to see The Life of Pi with another film friend. While I was waiting for her to get there, I checked the FB page on my iPhone.  The page had been up for about 2 1/2 hours at this point.  It had 650+ likes.

Two hours later when we got out of the theater (great movie by-the-way) there were 876 likes.  That stopped me dead in my tracks.  I looked at my friend with shock.  "Ohhhh my word.  I think we've started something."  I said.

Since then it's been mayhem.  'Save BC Film' is a full blown, grassroots movement that has poked the bear.  Or better yet, let me give you this analogy:  The bear knocked the hornets nest down when the posts were removed.  The hornets got angry and started to go after the bear.  The bear is now pissed.  Really pissed.  We have poked the bear and the bear is ready to attack. 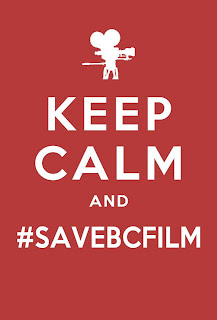 You can go to the FB page and read all about it if you want the details (I won't post the link as I see it as an admin and I think that changes the URL but just put Save BC Film into the search field) as I just can't go into it all here because I now no longer have a life I can call my own.  You can even 'Like' the page and have more access to content if you so desire.  And if you have a twitter account, check out #savebcfilm and @savebcfilm 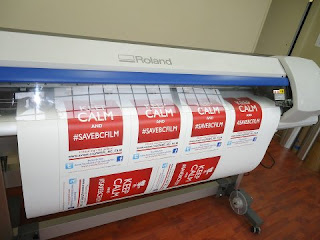 New stickers rolling off the press, donated by one of the suppliers to the industry that is suffering from loss of film related work.

Anyway... in the past few days I have been interviewed for TV news broadcasts, gotten 5 hours sleep a night due to monitoring the site's comments, been on conference calls, attended 4 meetings, been appointed Executive Producer for half a dozen PSA's (public service announcements so we can educate the public on how having film in the province benefits the economy),  spent hours strategizing with another admin I appointed, and spent more time monitoring the site.  Oh yes... and lots of time watching  and reading the media reports.  Whew!

That's a lot for a little old grandma script supervisor.

Here is a partial list of support businesses that benefit from, and even depend on, having a thriving film industry in their city: