DOGS AND CATS AND A GOAT, OH MY!

It's Thursday night, my first night here and Nancy doesn't feel like cooking. We go to a lovely little restaurant called The Mandalay that has tables set up on a big square dock over the water and a guy is playing music. We order and when our meals come, the lime chicken over rice I ordered is out-of-this-world delicious. We take our time over the meal and some drinks and watch both the sun go down and two 60 something women make fools of themselves on the dance floor. I could get used to this life.

It is HOT through the night and I open my window and turn on the small fan angled at me from the ceiling. Ahhhhh. Much better.

I wake early and no one is up yet, it is just dawn outside. I turn on the little light built into the headboard and pick up my current book. I read and then doze. I jump when Nancy says "Sandra." I roll over and her head is poked through my door. She laughs. "Sorry, I didn`t mean to make you jump. We need to get going in about 20 minutes." I get up and get dressed. When I walk into the kitchen, Jake has made me a cup of tea using the blackcurrant tea bags I put in the kitchen last night. I gratefully take a sip.

We talk about how the day will go. I am going to drive them back to the shop where Nancy will open up and start her day. Jake will lead me to Thrifty's in his car. We set off and about half an hour later, we arrive at the car rental. They aren't open yet so I park the car and drop the keys through the slot. We drive to one of Jake`s favourite hang outs, Sharkey's, and order breakfast. We sit at the bar because Jake is very social and he keeps up a running banter with the waitress and the kitchen staff throughout the meal. I just sit there, eat, and take it all in.

We leave there and head back to the Pet Resort. We go inside and there is a guy there talking to Nancy. He is from England. His accent is just like Michael Cain's and I love it. He just arrived yesterday and his 5 month old pure white Malamute has run away. He has posters in his hands and so does Nancy. He and Jake get talking and eventually start swapping stories about meeting people from England, particularly police, on their travels and how it has gotten them out of some serious scrapes. It becomes a 'can you top this' contest and I am thoroughly entertained. These two could write a book!! Over the next few days, Jake regales me with stories of his and Nancy`s travels across Australia, the states, Canada, Belize, Mexico and I am realizing there is a blockbuster best seller here. I need to start writing this stuff down.

Eventually, the guy concedes to Jake and gets going to plaster more posters around town. Jake wants me to get a library card. He loves the library and talks about having a card like it's having gold. He drives me over there and introduces me to the librarian. There isn't anyone in this town who doesn't know Jake and Nancy. He tells her I need a card and after I hand over my BC Drivers License, and Jake tells her to use his address, I am all fixed up with a card.

We head back to the Pet Resort and Jake takes off for his local watering hole and I take Nancy's truck to get some things I need to make the room organized. I have no idea where I am going but thankfully, everything is on one street. I do a lot of doubling back and forth before I get everything on my list. When I am done, I can't go back to the houseboat as they are sandblasting the bottom all day so I go to the Pet Resort and chat with Nancy as she grooms the dogs. The place is chaos with dogs running all over. Her little dachshund, Katie, recognizes me from spending most of last evening on my lap and won't leave me alone until I pick her up and let her cuddle. 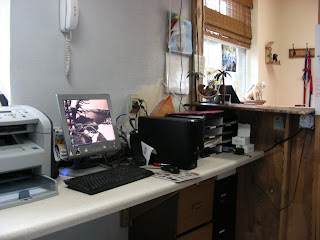 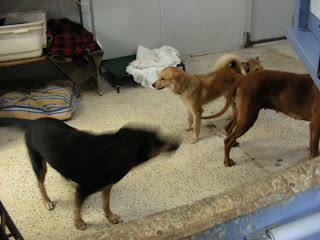 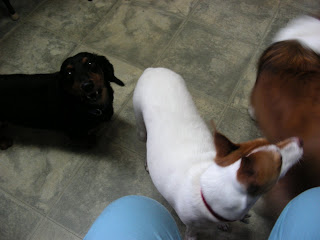 I get on Nancy's computer and check my emails. There is one from David. He tells me that 'as far as being honest, the pictures you sent me of you.... one doesn't look anything like the other two.' No kidding, nitwit. I sent two where I am all dressed up to go out and then thought, that isn't a very honest representation of me, so I sent one from my trip to Tortola where I had just walked in scalding heat for about 2 miles and my hair was limp and I am at Pussers attempting to cool down by drinking a painkiller. Definitely not my best look. As far as I am concerned, I was being more honest than I needed to be. Then he goes on to tell me that he paid me for my work on the brochure by driving to get me from the airport and for the (bit of) food I have eaten. As a parting shot he tells me that he can use the files after all and will make the brochures. I fire an email back telling him why I sent the one picture that 'doesn't look anything like the other two' and then tell him I kept the car a second day and didn't fill it up. (Put that in your pipe and smoke it). I tell him he owes me $150 minus the extra charges for the car. Later Jake tells me that he talked to the woman who runs the Thrifty's we dropped the car at, they are friends of course - like I said, he knows everyone around here - and she says the bill is almost $400. Apparently at the airport they forgot to include a $150 drop off charge. Now that is Karma. Not that I believe in it, although I do believe that you reap what you sow so I guess that is the same thing.

At 4:00 we close up shop and head over to the property they own on the Gulf of Mexico side and meet Jake there. It's a fabulous place surrounded on three sides by water and is where most of the Sigourney Weaver, Jennifer Love-Hewett, Gene Hackman and Ray Liotta movie 'Heartbreakers' was filmed in 2001. Back then there was a restaurant on the property. It wasn't in operation anymore and once filming ended, the county made Jake bulldoze it down. He has plans to build a house there one day soon. Meanwhile, he bought the houseboat and keeps it tied to the dock on the canal side. Apparently, he has been fighting with the county because they don't want a houseboat in the canal. They don't want it connected to the property at all. So when it comes back from the boatyard, he plans to tie it to a small cement dock that is currently tied up under some mangroves. He will move the cement dock to the bay side, tie it up to the wooden dock there, then with the houseboat anchored bow facing out to the water and stern tied to the small dock, he figures the county won't have a leg to stand on because, technically, it won't be tied to the land. I hope it works. It's a shame that the land has been let go some; weeds are growing all over the trucked-in white sand, and one end of the land is full of junk - an old bus, a couple of rusted out trailers, a small front-end loader, fencing piled up, a run-down shed, an old vinyl swimming pool - leaning to one side and the bottom full of dried algae. 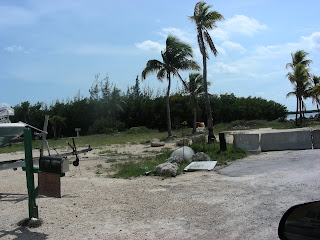 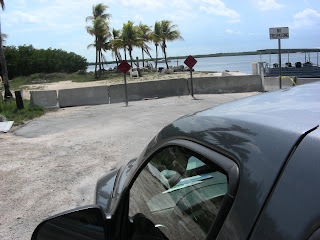 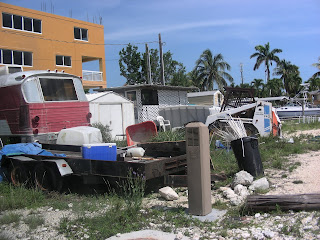 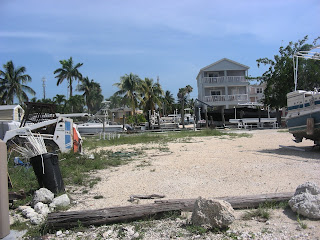 Nancy loves animals and she owns not only Katie, but two other dogs, four cats and a goat. The cats and the goat are on the property. The other two dogs stay at the kennel while the boat is in dry dock as they are too big and need to be able to run around. The goat freaks me out. It comes right up to me and rears up on it's hind legs. I quickly step back with a strangled cry. Jake tells me it thinks the can of Pepsi in my hand is beer and it wants some. He then proceeds to tip the can of beer he holds down the goats throat and it guzzles it down. I shake my head. Unreal. Later I will feel the thing chewing on the hem of my dress. For some reason I can't seem to get away from it; it seems to know I am afraid of him and so taunts me by following me everywhere. Nancy sets about letting the two big dogs out of the back of the truck for a run and then goes off to feed the cats. Katie is thrilled to see her friends and they all three set of chasing each other around the property and when they tire out, they flop down in the sand that Jake had trucked in to make a beach of sorts. One of the bigger dogs picks up a coconut that has dropped from one of the many palm trees scattered about the property and proceeds to tear it apart, strip by stringy strip.

Climbing aboard the pontoon boat that Jake owns, it's tied up to the bay side dock, we sit there sipping our respective cans of beverages, talking about the history of the property. I am just thinking about how nice it will be when the houseboat is back here and I can go for a swim when Nancy tells me that, every so often, they see a crocodile swim by. Scratch that idea.

It starts to rain heavily and the goat, who hates to get wet, jumps aboard the boat. Of course it comes straight over to where I am. I jump out of my chair and sit up on a high ledge at the back of the boat, feet up on the ledge and out of chewing range.

After about an hour we head back to the Pet Resort where Nancy spends the next hour checking out the day care doggies back to their respective owners and Jake and I hang about and he tells me more stories. Once Nancy is done, we drive back to the boat yard and get ready to go out for dinner. Friday night is All-You-Can-Eat Fish Fry at Sharkey's and a weekly ritual for Jake and Nancy. I am looking forward to it.