IS THAT A MONKEY ON YOUR HEAD? 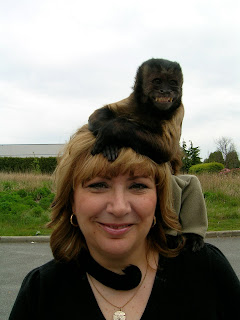 Yes. I have a monkey on my head.

I am walking through the parking lot to get my chair out of my van when I pass by the trainer's vans and one is eating breakfast with Crystal, who is eating a plate of fruit, sitting on the tailgate. I walk over and start talking with the trainer and, before you knew it, am posing for a photo with the monkey. She jumps readily onto my shoulder and wraps her arms around my head and her tail around my neck and then 'smiles' for the camera when told to by Tom, her owner. He then tells her to give me a kiss so she leans around and licks my face near my mouth. She stays up on my shoulders for about ten minutes while we continue to chat and I can feel her picking through my hair. "She's grooming you," Tom says "It's a sign that she likes you and wants to bond with you." That's fine, as long as she doesn't find anything.

I ask a lot of questions about training animals and the big thing I get from it is that it takes a TON of patience. One of the dog trainers tells me that he can even train fish to play basketball!!! He said that you can buy a little basketball kit for the fishtank (who knew?!) and then when the fish goes to the ball and touches it with it's nose, you tap the side of the tank and then give it some food. After four or five times it realizes that it will get fed for touching the ball. If it goes to the other side of the ball and touches it so that it moves the wrong way, no treat. It doesn't take long for the fish to realize which way it needs to push the ball. Then it's just a matter of teaching it to push the ball up and into the net. Right. Not something I will be doing any time soon. 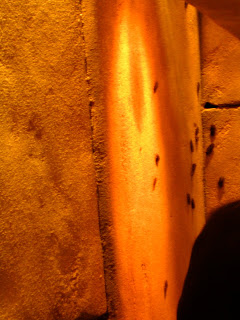 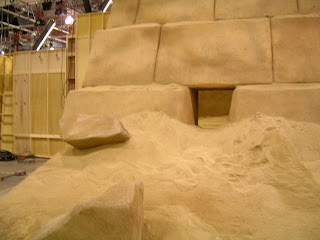 We are at a different sound stage today, in a warehouse about 10 minutes down the road from the one we were at yesterday. This one has a lot of builds that replicate the pyramids and Cleopatra's boudoir. There's not as much sand on this set. Just bits in the corners of some rooms and down corridors. Today not only will we be working with puppies and a monkey, but 6 dozen large cockroaches. UGH! This is the second time I have worked with these bugs on set and I hate it. This time they will pour through a chink between two stones in a chamber wall and crawl all over. There are two guys stationed to watch for runaways and yet, when the scene is over there are bugs everywhere. I see one running on the outside of the set way up at the top of the wall close to where I am and yell for someone to come and get it. They are all gathered up and then we go again. So out they pour from the chink and, this time, they have more people watching. They are scooped up as soon as they are off camera, and put back into their containers. As we are setting up for the next scene, I keep a watchful eye on the bug wranglers as they count them. I see the big guy put the last bug from the big pail into the small container and then say something to the other wrangler. The second guy gets up and starts looking at the floor and then at the wall overhead. I jump out of my chair. At least one is missing. I tell the crew on the floor and everyone starts looking around. It's found right away, down deep in a crack between two stones on a wall. Because the stones aren't real, they're just an inch or so deep on plywood, it shouldn't be hard to get but it is because the crack is where two pieces of plywood are joined with screws in the back so that the walls can be removed for camera. It seems the bug is under the overlap a bit. The wrangler has a long, thin metal rod with a hook on the end that he sticks in the crack and it takes him about 5 minutes to work the cockroach out. Once he has it safely in the container, I breathe a bit easier but it takes about two hours for me to stop checking the floor at my feet.

This movie has the biggest budget of any film I have worked on and it shows. The sets are gorgeous. I wish I could put pictures up here for you but I didn't get permission for it and so can't. Once the movie is released, I will put up some photos as I have some where you can see off-set so have some perspective and, for those who don't work in film, you may find it interesting.

No day working was less than 15 hours and one was 17, so not bad. And lots of the sand was trucked in overnight before the last day of shooting so that we can get the shots we missed on our last day at that other location. So now there's dust in the air again.

Our last night, the guys at catering make filet mignon and lobster tails but we started at 4:30 so it's 10:30 by the time we break and there's no way I can eat that so late at night. I just don't have the appetite for it. So while everyone around me eats like kings, I have a bowl of chicken noodle soup and a thick slice of buttered french bread. It hits the spot. And a slice of caramel toffee bread pudding just tops it off perfectly.

When the last shot is in the can, 'that's a show wrap' is called and I say goodbye to Crystal and her trainer. I am sad that I won't see her again unless, of course, I get to work on another show where she is brought on. She lives in California so I can't drop by for a visit. The director was so taken with her and her skills that he is going to write a script just for her. I would LOVE to work on that. 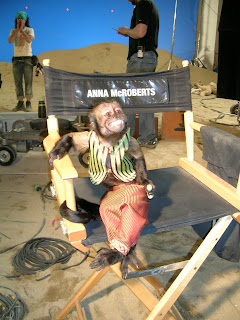 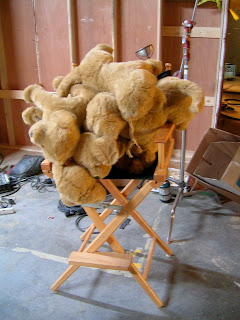 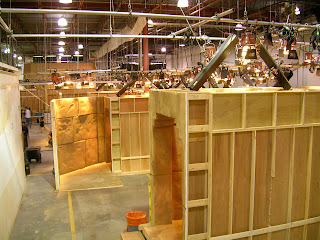 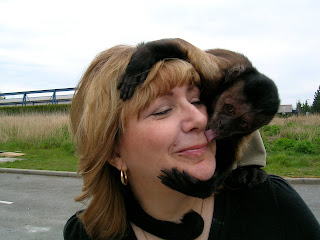 Crystal posing. Stand-in dogs piled on one chair - I found that quite amusing. Overview of 1/2 of the sound stage. Kissed by a monkey.
Posted by Sandy Montgomery at 8:16 PM No comments: