I went to bed early last night, I was so tired from my day of touring Grenada, and as a result I am wide awake at 6am.

Today is a national holiday named Thanksgiving, but there is nothing about it that relates to Thanksgiving in North America. Thanksgiving here is a relatively young holiday as it is in celebration of the liberation of the nation from a military coup thirty years ago, courtesy of the USA. I recall the weeks, back in 1983, when it all went down, but I was knee deep in toddler and baby life, having a two year old and a newborn thus did not have time to learn the why. So I spend some time online this morning, researching and learning.

I head out to La Boulangerie, just down the road, for a croissant. It is delicious as it is fresh baked this morning but, sadly, the San Pelligrino is flat.

After breakfast, I walk over to the beach and there are lots of locals out today due to the holiday. I head down to the North end on a quest for sea glass and find quite a lot. While there, a couple slightly older than me come along, they are from Colorado and we have a nice conversation as we all search. I admire a necklace she is wearing -  a gold chain with a very pretty pendant made with three lovely pieces of glass she tells me she found on a past holiday. 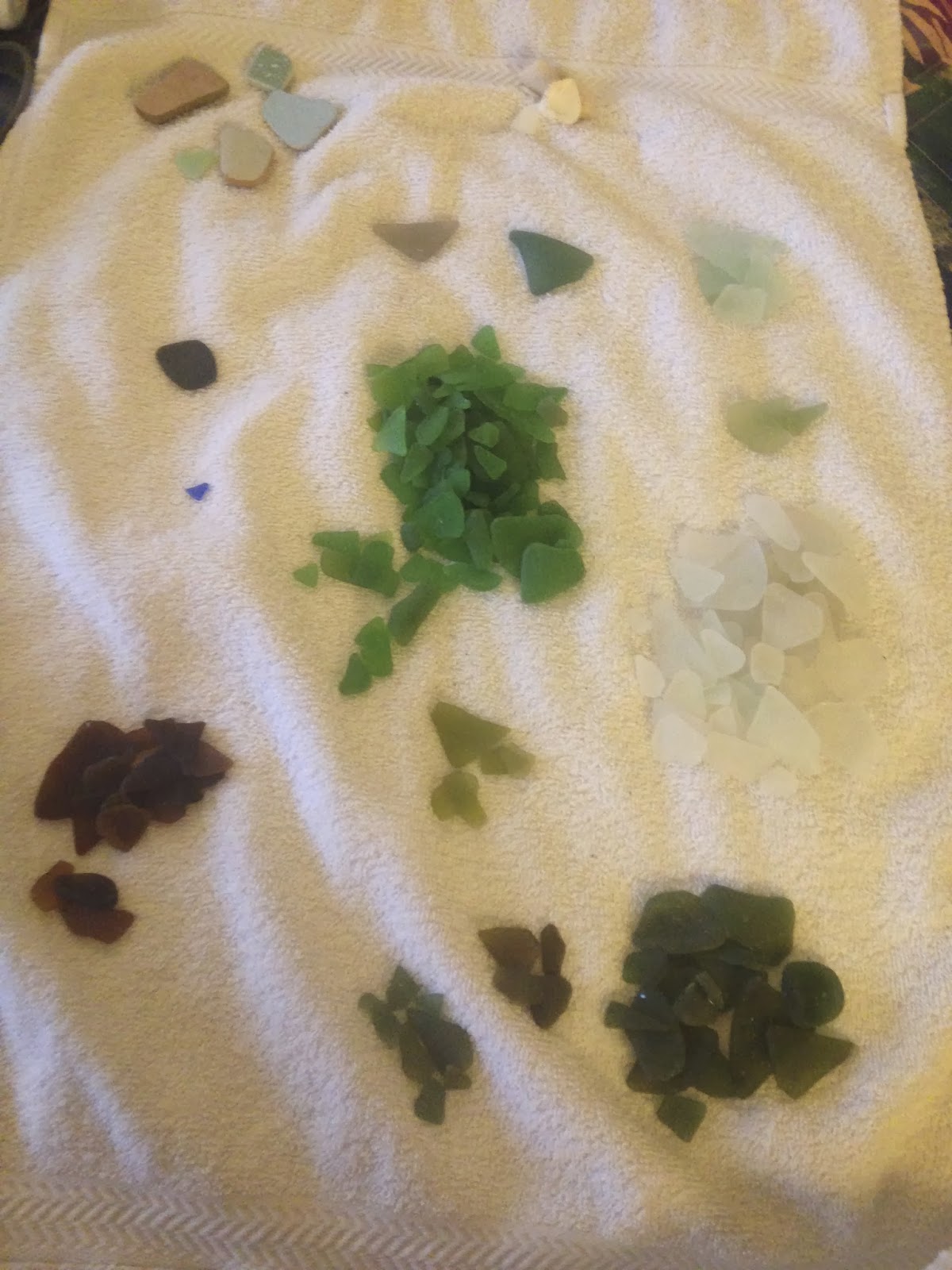 The bounty from a very successful hour of sea glass hunting

I walk back to Allemanda and my beach bag is so heavy! It's a gorgeous day so in the heat the bag seems to be getting heavier and I decide to stop for a float about in a gorgeous, pool-like bit of water before carrying on.

After saying hello to the couple I see every day, I get a lounge and settle into the usual spot but within an hour a huge system moves in and it starts to rain a lot. I pull my lounge up under the tree to wait it out but give up after a while and decide to walk to the South end of the beach. I go to The Owl, a restaurant attached to The Flamboyant Hotel, and order chicken roti with salad (as described on the menu) and a Ting.  The roti is very good but the 'salad' is a joke - a tiny piece of lettuce, one slice of cucumber and one slice of tomato. 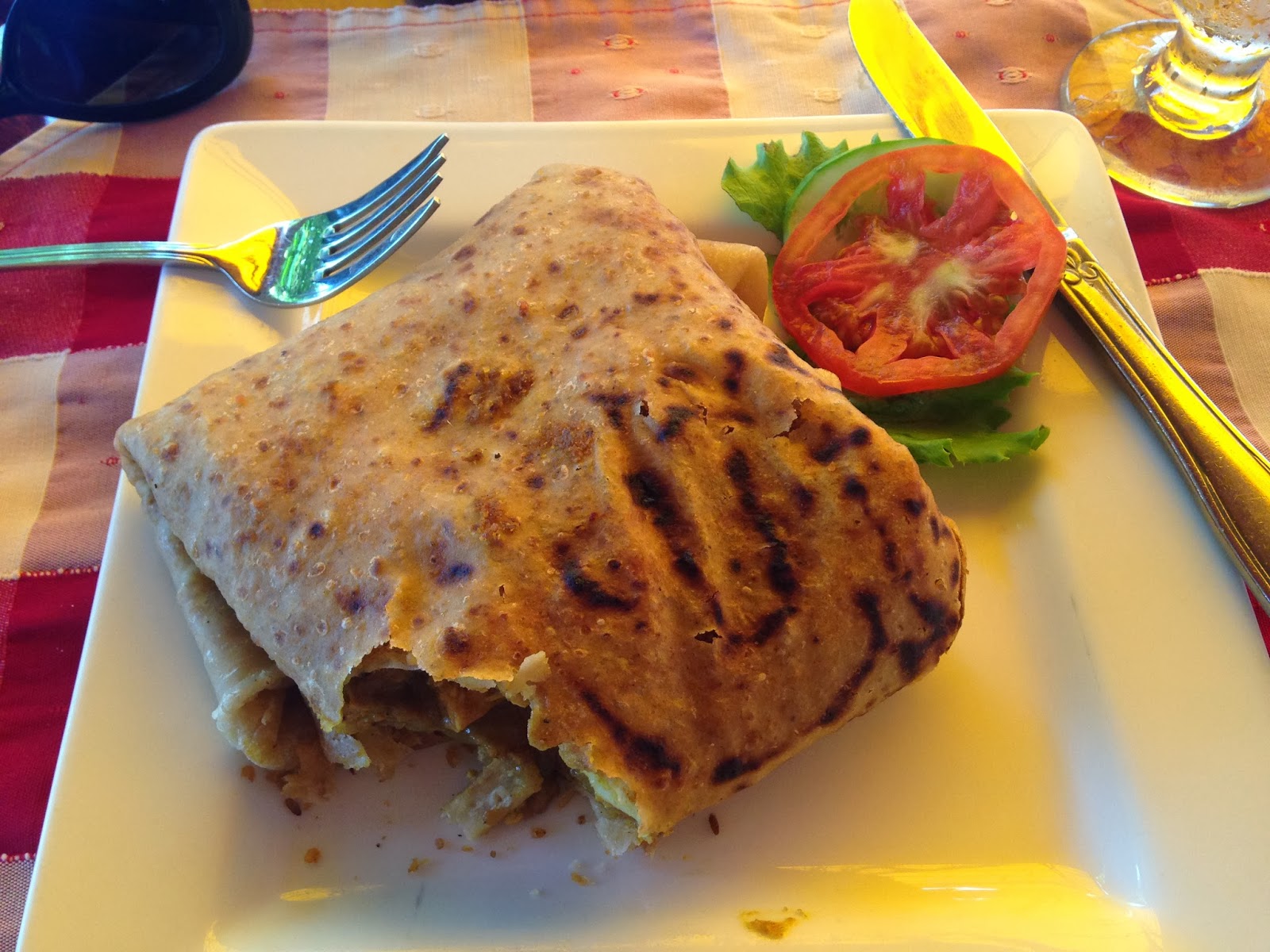 Lunch at The Owl

I overhear a group of people a few tables over talking about being on the island for the invasion. Sounds like one of them was a med student at the time. He talks about hearing the shots that killed the Prime Minister and his cabinet. How awful. They have lots of interesting stories actually, and I rather enjoy hearing them. And I wasn't really eavesdropping as they were talking so loud, everyone could hear them.

After lunch I sit on the beach for a bit under the seagrape trees on one of several lounges there that belong to The Flamboyant. The weather is still drizzly and I take out my camera to get a photo. As I click the button, something seemed to drop through the frame. When I look at the photo, I see that a bird was coming in for a landing right as the shutter opened. 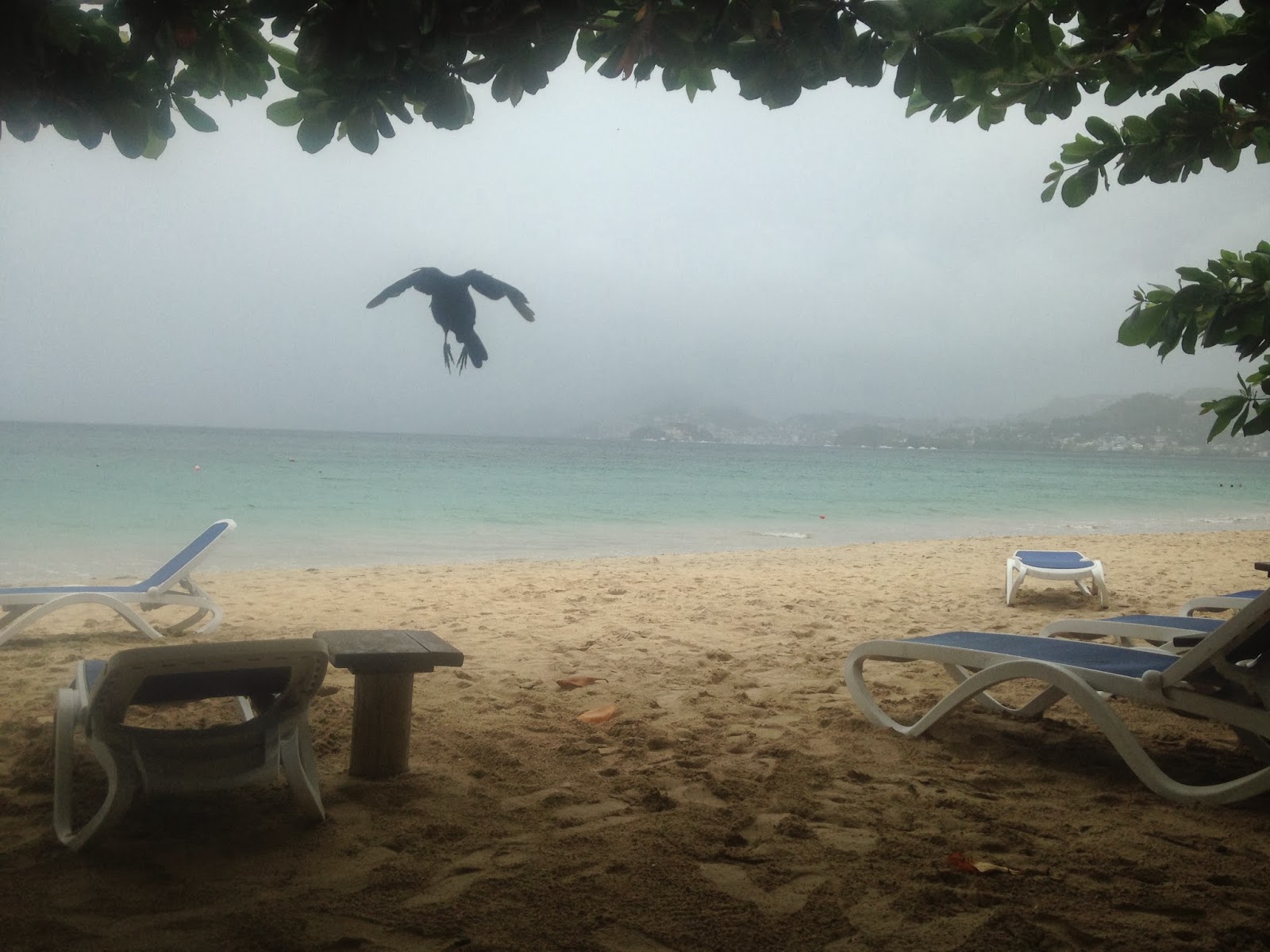 Coming in for a landing

An infestation of ants that are biting me drives me off. I stop by Cinnamon Resort's beach restaurant, SAVVY, to take a look and decide to go in and have a drink. I love the look of this place with it's large couches and chairs grouped around long low tables, and the beautifully painted tent roof overhead. I select a comfy chair, plop down, and order a pina colada. This is a really lovely spot and I decide I will come back for lunch on another day. 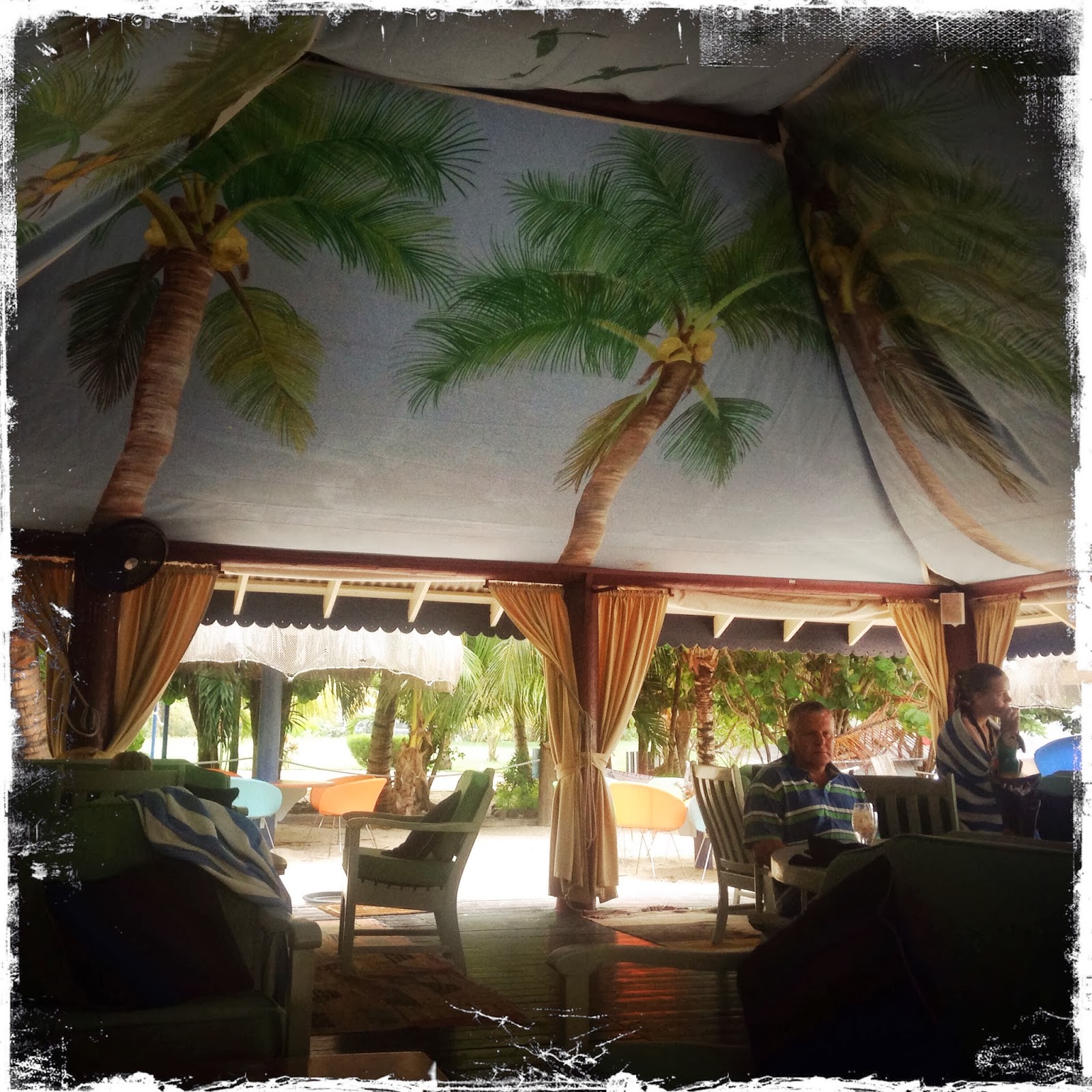 Love the ambience of this place 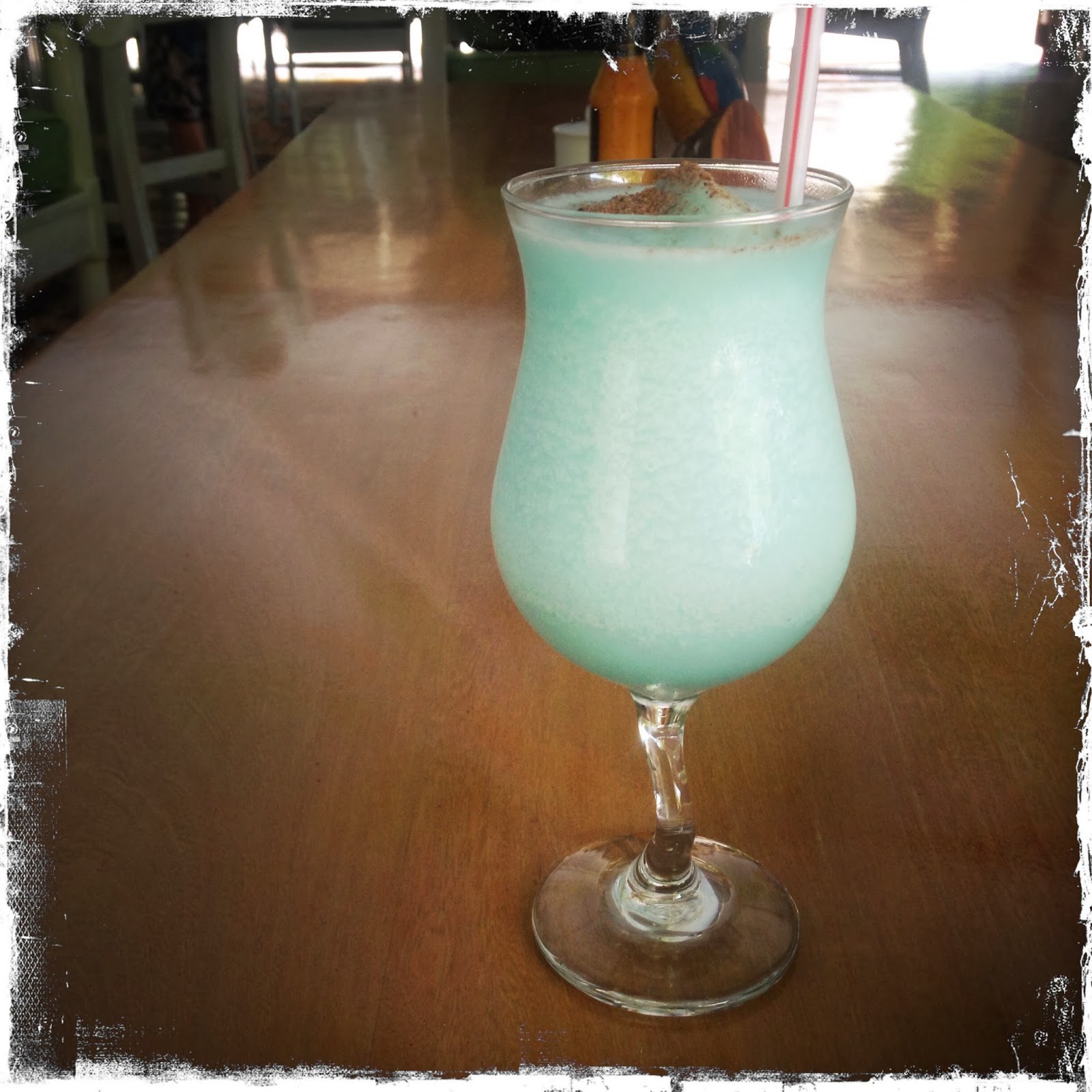 After an hour or two of relaxing with my Kindle, I head down the beach to the Allemanda. The beach is so busy, despite the weather, with all of the locals out enjoying the holiday. I come across a group of young guys playing cricket on the sand and there's an older guy up to bat. As I walk by, he drops the bat and walks over to me and I realize, with a sinking heart, that it is Tom the taxi driver. He right away asks me out and I say no. He asks why and I hem and haw. He says he just wants to get to know me. Sigh. He keeps pressing me and something in me breaks. Fine. You want to go out with me? We will go out. I don't say that, I say "Fine. Ok. I will go out for a drink with you tonight. Pick me up at 7." and he breaks into a big smile as I walk away to continue down the beach.  He also gives me a hard time about not using him to take a tour like we had talked about. I tell him I went with a company that was a lot cheaper than what he quoted me.

I kick myself most of the way back to my hotel while deciding that I will not hold back as to why I don't want to go out with him when I see him tonight.

I take a short cut through a school yard on the way back that saves me 10 minutes of walking but the entire grounds are a mine field of crab holes! It's like a crab hotel!

Tom is 20 minutes late picking me up and he's lucky I am still here as I was just in the process of calling a taxi to take me to dinner.  I am seriously thinking of telling him I have changed my mind but think to ask him where he lives. He lives in Gouyave which is over an hour away and I would feel terrible having him gone home to change and come back all that way for nothing so I lock my door and head to his van where he holds open the back door for me to climb in. I tell him as I am not a paying customer this trip, I will sit in the front and he quickly clears a pile of junk off of the seat so I can get in.

I am hungry so he takes me to a Chinese food place that is a dive at the side of a busy road. I thought we'd order a few dishes like we do back home and share, but he orders a plate of chow mien for himself so I do the same. I eat two forkfuls and leave the rest, it really is that bad; until now I hadn't met a chow mien I didn't love. 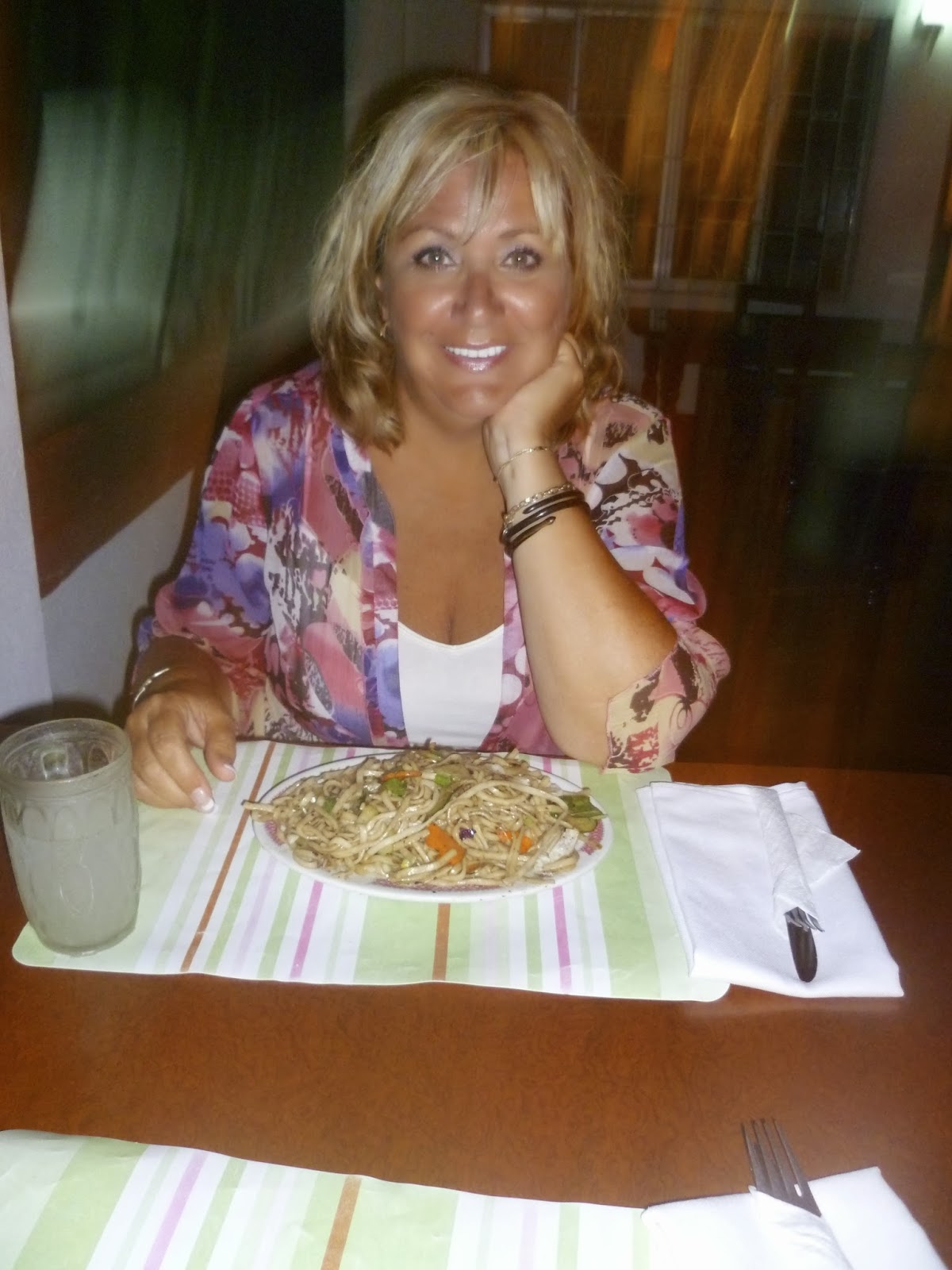 Me and a plate of chow mien I won't be eating

It is an awkward conversation. He goes off on how he thinks I am beautiful, that I am interesting, that I intrigue him, that he just wants to get to know me better, ad nausea. I interrupt to ask him how old he is and he says he is 33. I tell him that is the same age as my son and he shakes his head and says age is just a number, blah blah blah. I tell him it's a big number to me.. the number of my son's age and that alone would keep me from dating him. It also comes out that he is still married after telling me, in answer to my specifically asking the first night he asked me out, that he was divorced. When I express my outrage at his lie to me, he claims that here in the islands, once you're separated you are considered no longer married so he did not lie. I explain to him that where I come from you're married until you have a document stating you're divorced.

I also bring up that he listens to Christian radio so I can safely assume he is a man of faith and if so, doesn't the Bible say something about not being 'unequally yoked together with an unbeliever?" and since he doesn't know me at all, why is he trying so desperately to date a woman who could be a hedonistic heathen, for all he knows. He tries to tell me that verse isn't talking about personal relationships and I have to laugh. He has no idea that I have sat in church for most of my life, listening to sermons and several really good ones on the meaning of that verse, not to mention doing my own study, books I have read on the subject etc. so I know exactly what it is talking about and it most certainly does apply to personal relationships... more so than most other kinds!

He asks me what I meant on the beach earlier today when I had said he made me uncomfortable the other night. So I told him. I am a single woman, travelling alone, in a strange country so the only way I feel safe going anywhere after dark is to hire a taxi. I pay to feel safe and then I get a taxi driver who behaves very unprofessionally and abuses his position, using his taxi to attempt to pick up women who are travelling alone. He crosses the line from friendly to intrusive with his many personal questions. I didn't like it and it made me uncomfortable and add to that - he knows where I am staying and even what room I am in. How does he think that would make me feel? He seems genuinely taken aback and apologizes to me.  We sit there in relative silence for a bit but dinner is over, in less than an hour. We leave and he drives me back to the hotel.

He brings up the offer to put aloe on my back the other night so I tell him what I think of that too. In response, he claims he wasn't trying to get into my room, that we'd have gone down to the pool for him to do it. As if I believe that, never mind that at the time, he specifically offered to come into my hotel room to do it. As I am walking to my room he, unbelievably, tries again by asking if he can have my email address and cell phone number. I tell him an emphatic 'no' and his face falls so I say "I have your business card that you gave me on the beach the other day. If I feel inclined, I can contact you," then wave goodbye as I go into my room and shut the door.