ONE DARK NIGHT ON TORTOLA

My daughter's wedding was over; the happy couple were on their way to spend the night in Trellis Bay before heading to Little Dix resort on Virgin Gorda in the morning, the guests had gone back to their respective accommodations in and around the West End of Tortola, and I had driven back to my villa rental with a bridesmaid, a groomsman (my daughter and son), the groomsman's girlfriend and one very tired out hair and makeup friend. We had just gotten into the house, collapsed onto the couches and began to talk about the fabulous day we had experienced, when I jumped up.

"What mom?" asked my daughter, Shonah.

"We forgot to get Ashleigh's dress and the top tier of the wedding cake!" I couldn't believe I'd forgotten her wedding dress, of all things. I had no idea where it was. She got changed in one of the rooms at Long Bay Resort and had asked me to make sure to take it with me when we left. It was my responsibility to get it back home to Vancouver when our holiday was over. "We have to go back and get it."

Shonah said she would go with me and we both went to get changed out of our wedding clothes. I dreaded driving back, in the dark, down those hills and switchbacks from our place on Windy Hill to Long Bay but I had no choice. We hopped into the SUV and set off.

When we got to the resort, all evidence of the wedding reception - other than the tent and tables, was gone. So was any sign of life. We drove down to the cabins on the water and got out of the car. "Let's go knock on the grooms parents door. That is where Ashleigh got changed and maybe they have the dress." Shonah said. We headed down a dimly lit sand path to the cabin and knocked on the door. There was no answer.

"Maybe they're around the front having a nightcap on the patio. Let's go see." I said. The only source of light between the cabins was that of the moon, and we carefully picked our way to the beach side. There, light from the inside the room streamed through the french doors and lit the patio and we could clearly see that there was no one in sight. We had no idea which rooms the groom's brother and friends were staying in, but we assumed that they were most likely all hanging out in one of them, rehashing the days events like we had started to back at the villa before realizing we had to come back here. We decided that the dress was probably safe in the room and we could come back tomorrow for it. We picked our way back to the SUV and climbed in. I was about to start the car when my daughter let out a squeal and began to bat at her hair. "What? WHAT??" I instantly began to feel panicked. I mean, there's all manner of huge bugs and spiders in the tropics. Everyone knows that and my mind always goes to the worst place in cases like this. I am thinking tarantula!!

"Something was in my hair!!! It just fell out and brushed my cheek and it felt wet." She too sounded panicked, albeit somewhat less than I felt.

"Get out! GET OUT!!" I yelled as I opened my door and jumped out. "We're not getting back in this car until we find it." I was completely freaked out as I began to search, by the dim light of the dashboard and a bit of light that trickled in from a distant porch, my heart pounding in my chest. As we both searched for whatever it was, I was thinking 'I have no idea how were going to get it out. I am not touching whatever it is.' Just then Shonah spotted it. There, on the dash just by the knob for the radio, was the tiniest frog I have ever seen. He couldn't have been more than an inch long. "THERE! It's a frog!" She laughed. "Oh my GOODNESS. So it is. How are we getting him out?" I wasn't going to touch him. "MOM! It's just a frog." Shonah sounded disgusted with me. "Yes and some are poisonous. You don't know if this is one." So we fished the rental papers out of the glove compartment, keeping an eye on the frog all the while, and then Shonah gently flicked him onto the papers and then out of the car.

"Get in and shut your door, QUICKLY!!!" We both shot into the car and slammed the doors, and, after a long beat of looking at each other, broke into peals of laughter.

"That poor frog was probably more scared than we were, Mom. It was so tiny!!"

I was still shaking as we pulled out of Long Bay and on the road that would take us back to our villa. Out of all of the things it could have been, a tiny frog was probably the least of them - but still!

As we chuckled about it on the drive back, we both agreed that we'd never forget this night.

I have written before about my BVI themed Pandora bracelet. Not every bead is a Pandora bead - the conch shell, the starfish and two small crystal separators aren't. And yesterday I added another nonPandora bead; a small enamel frog to remind me of that night on Tortola. 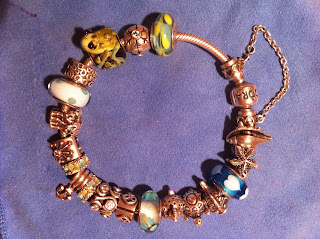 He is now part of Sandra's Selections in my Amazon shop. You can get both him and his friend by clicking on the link below.

Posted by Sandy Montgomery at 12:05 PM No comments: