I worked on a tv series this past summer for almost 5 months.  It was a great show, and I loved that we were in one location the entire time, mostly indoors.  But what that meant was, I never saw much of the great summer we had this year in Vancouver as I was indoors in dark studios 14 hours a day (except for the 45 min lunch break where I'd step out into blinding sunshine and stumble my way to the catering truck with the rest of the crew who were shading their eyes and grasping for sunglasses). I don't even think I went to the beach once.  Maybe once right before the show started... I can't really recall.  The show itself was really challenging for me, being that it was 75% CGI (computer generated) so lots of green screen work.  Shooting on a green screen stage is very different from practical sets and so that challenge, coupled with a big cast and SO MUCH CONTINUITY to follow (injuries galore - along with bandages and braces, a couple of props that appeared in many scenes but kept changing either their ownership [a magic ring] or their physical appearance [a rope weapon that sometimes had a weight on the end and sometimes didn't]) wore me right out.  The physical fatigue of 14 hour work days plus a two hour commute was matched only by the mental fatigue of keeping up with and keeping track of all the many many MANY details over 13 episodes of a linear storyline.  Basically a 13 hour movie!!

SO.... in September I decided I deserved a trip somewhere warm when it was all over - to get the summer I never had and to get some much needed R&R.  I wanted to go for a month but preferred to keep it to $2000 or so on the flight and accommodations.  Quite the challenge.  After looking at Mexico, the BVI and the Bahamas and ruling all out because of the cost, I turned to the Dominican Republic - somewhere that has been on my radar due to wishful searches for real estate in the Caribbean and discovering that you can get a lovely condo there for a shockingly low price.  I had, during said searches, decided that a discovery trip to the DR should be in my future to see if it was somewhere I could live for 6 months of the year, come retirement time.  I suddenly recalled this in my search for a budget conscious trip, and VOILA...

The condos I had found that I liked were in a small town on the north coast called Sosua.  I knew nothing of the place but eventually decided that was where I would stay so I could take a look at the real estate.  A quick search online revealed that the town has a lovely beach, many restaurants, and is popular with North Americans for both travel and relocation.  It is a short 20 minute cab ride from Puerto Plata and the international airport there, which was perfect,  so I booked my flight(s).

Flights to the DR from Vancouver are surprisingly cheap.  All in I paid $760.  What I really liked was that it took just one connection (instead of the usual two to the Caribbean) flying from Vancouver to Newark to Puerto Plata.

I decided to try Airbnb for accommodations, as I have had friends who have gone that route and had nothing but good things to report, not the least being the great prices.  After some searching, I ended up settling on a lovely place right in the center of Sosua owned by a couple from Sweden.  They have three suites with separate entries off of a large porch overlooking the main street and, bonus!! - there is a bakery downstairs.  The couple live at the rear of the building.  There were glowing reviews from previous guests so I booked it at $730 for the month!  A bargain. 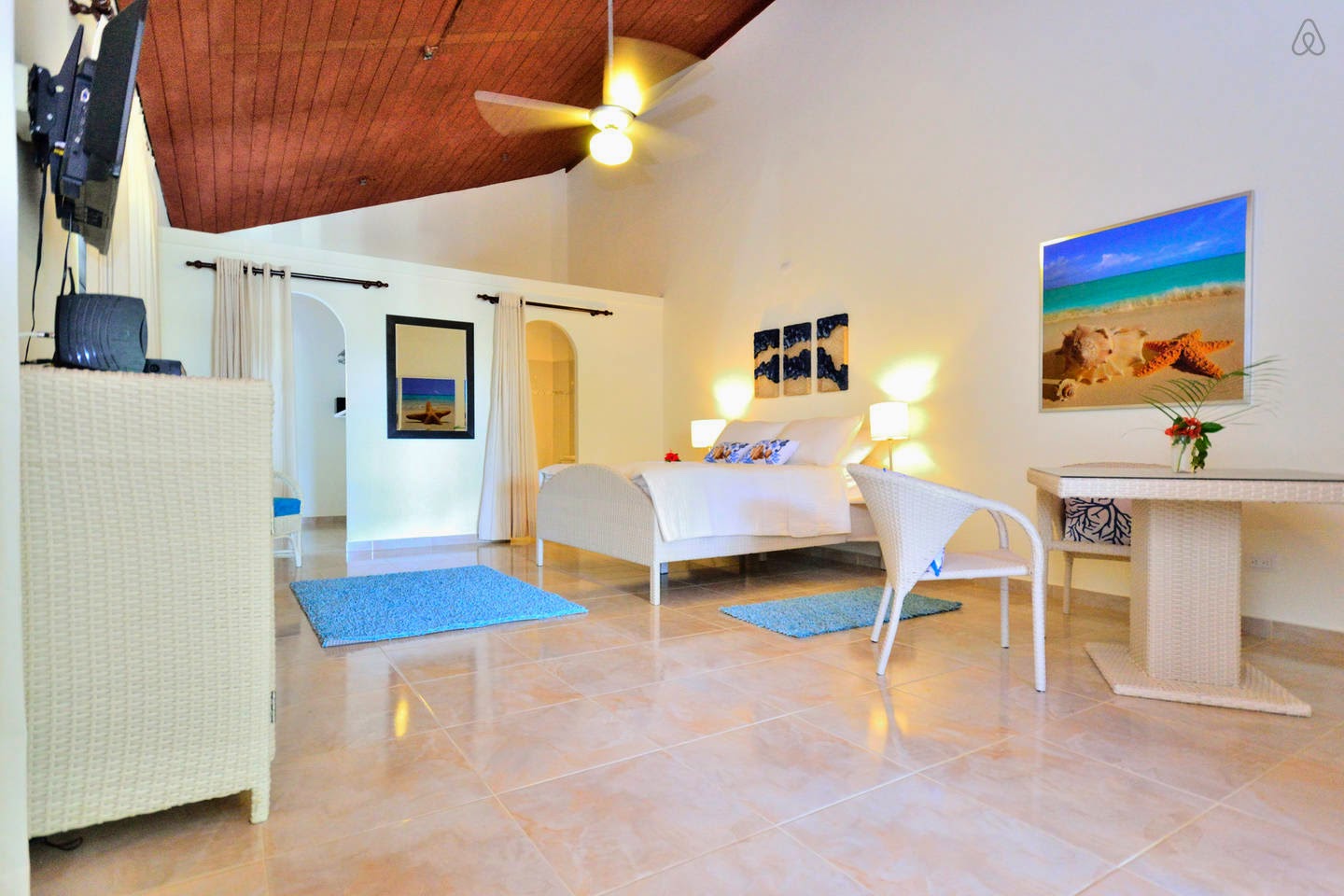 My room in Sosua 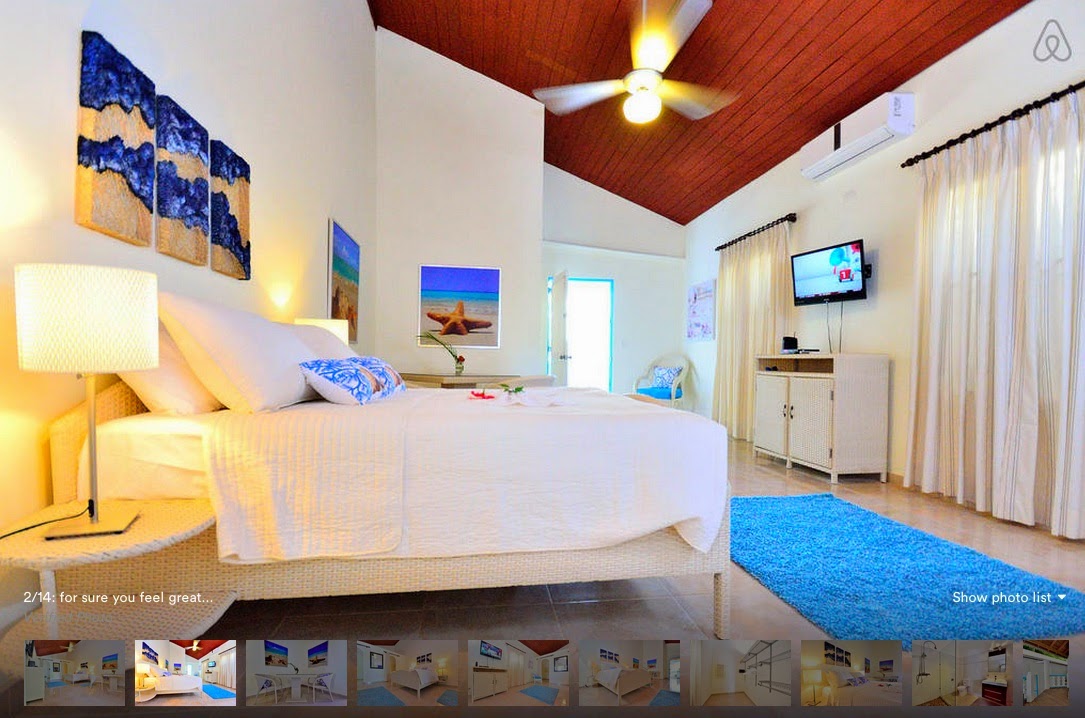 Looking towards the entrance to my room in Sosua 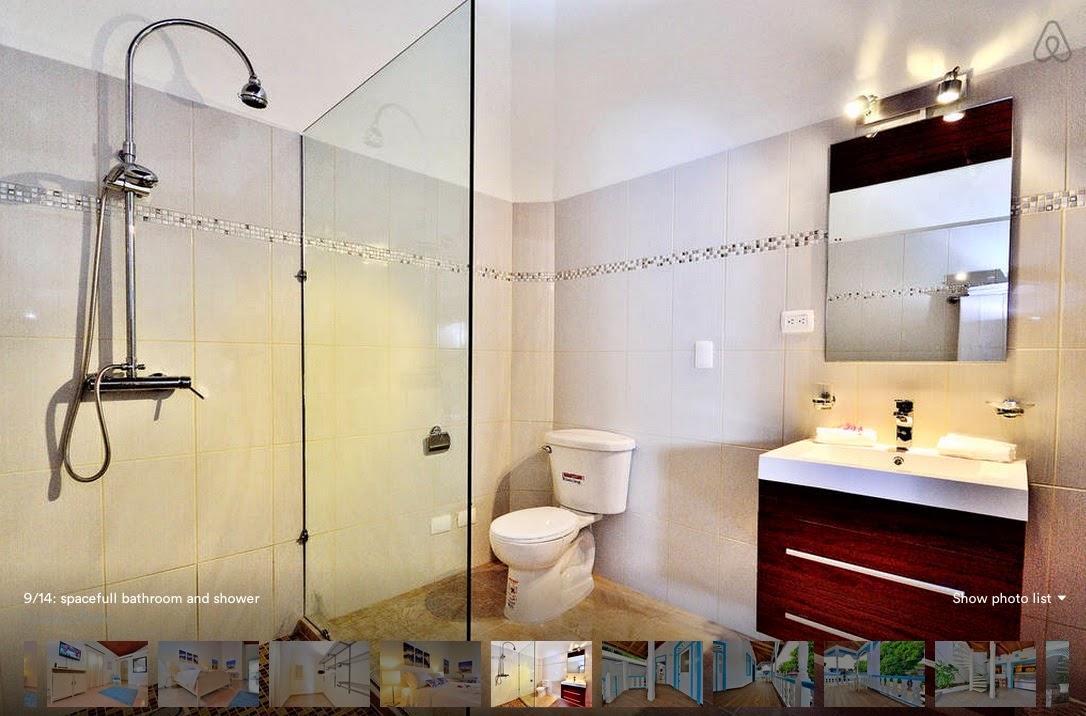 My lovely bathroom in Sosua

Next I will post on how so many things have gone awry with this trip already, and I haven't even left my house!

Posted by Sandy Montgomery at 2:05 PM No comments: