On my way down a dry sandy road to see something I have always wanted to see with my own eyes... 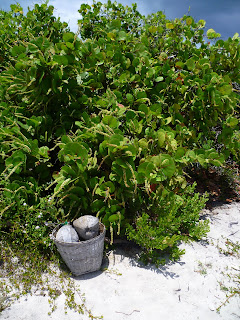 I was surprised to come across this little basket tucked into the bushes that lined the road. 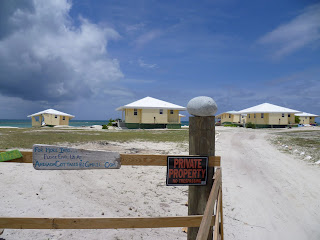 The sign says 'No Trespassing' but I was told a day or so ago that I could ignore it and walk through to continue along the beach. Regardless, I have wanted to see this in person for some time now, so there was no way a sign was keeping me out. During a particularly rough sea storm, the beach front washed entirely away and the ocean waves have been eroding the land that these rental cottages are built on ever since. I have since heard that the previous owner, who built the cottages, removed masses of sea grape trees which grew on the beach, protecting it from the surf.  As soon as he did this, the beach began to erode at the rate of about 50 feet or more a year. 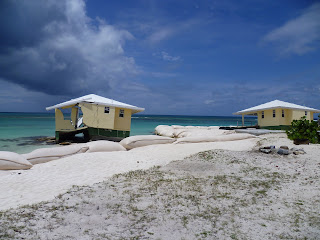 As you can see, there are huge sandbags in place to try to keep the sea out - except for the cottage that is too far gone to save; it is well into the sea on the outside of the bags. 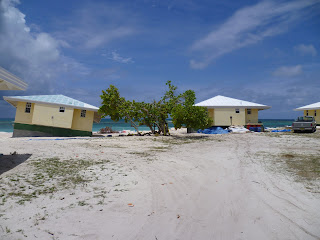 Seeing this reminds me of a song we used to sing in Sunday School: The foolish man built his house upon the sand...the rains came down and the floods came up...and the house on the sand fell flat. 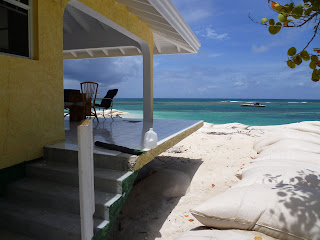 The barge out in the water has a loud pump working on it that is pumping sand back onto the beach to try to shore up the cottages that are listing.  That is going to take a lot of sand. 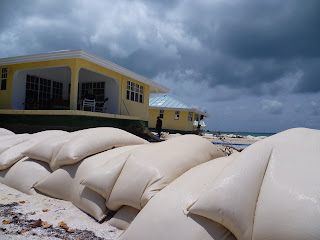 Apparently it is costing the owner $3,000 a day. I think it's a fools errand, throwing good money after bad. The sea will win this one (or so I believe).   And I wonder if it is an ecological issue... where will the sand come from ultimately as sand isn't created by the ocean in a day. 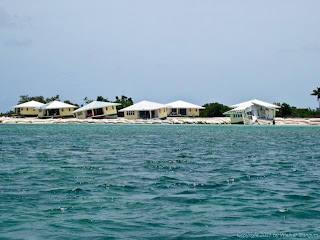 Walker took this photo of the cottages from the water. 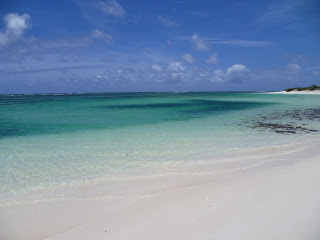 Continuing on, I found the best piece of beach of the whole walk - there was no waves and hardly any current... 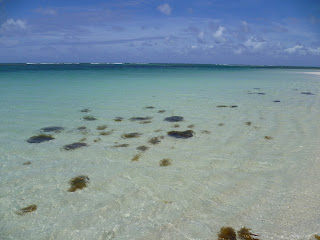 ...the water was warm, shallow, and crystal clear. I was HOT after walking the road, so I got in and floated around for 15 minutes. Refreshed and wishing I could stay all day, I moved on to my new goal of walking to Cow Wreck Beach, where Hidden Treasure is, and where there's a bar and grill - I was looking forward to a much deserved drink and lunch. 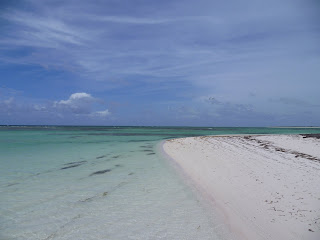 See the flock of birds in flight? They were all over the sand and as I walked closer they would move down the beach a few yards... 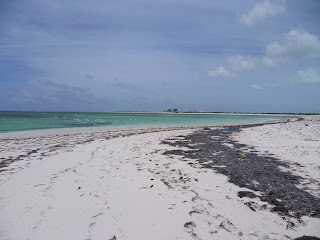 ...settle in, and then repeat the process as I got closer. A couple of them got really pissed at me for this and started to fly behind me, squawking and swooping at me, trying to scare me away. 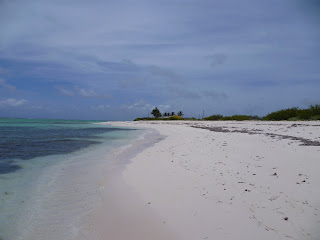 After three and a half hours of walking, swimming and resting - Hidden Treasure is finally in view! 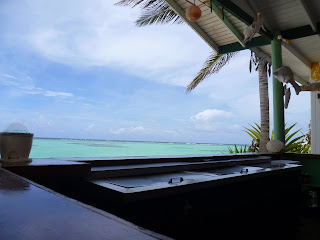 Finally at the Cow Wreck Beach Bar and Grill, I sit down and enjoy the view while I wait for... 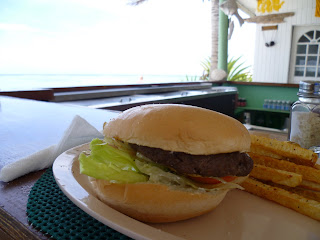 And again - for the second time in a week, for most of this walk, I heard no noises - nothing but the sounds of nature. BLISS! 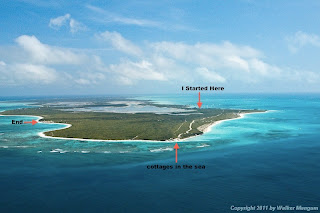 Arial View of Anegada, and how far I walked. Click on it to enlarge and get the full scope of how far it is. Photo taken by Walker Mangum

Note: The cheeseburger was okay (not well done like I asked for, but the fries were home made and fabulous) and have I paid for it since. I should not be eating stuff like this yet I guess because now I have a tooth that is giving me so much pain I can't bear it unless I am popping Ibuprofen every three hours. I wrote to the dentist about it and he's chided me thoroughly - so it's back to only soft food for me for the foreseeable future.
Posted by Sandy Montgomery at 11:17 PM 2 comments: