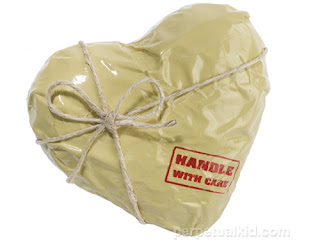 I go to sleep with my head in turmoil.

I wake up with perfect clarity. I send off an email thanking them for the offer and then turn the big show down.

In a business that isn't known for loyalty or integrity, it is important to me that I have both.

I am expecting a barrage of 'comments' from my film friends on FaceBook who, last night, left numerous messages telling me to take the big show and that the little show would understand; that it was a fantastic opportunity and that I couldn't say no to it. As I sit, after pushing 'send' on the email - finger hovering for several long seconds before letting it drop down onto the key, I imagine their reactions when I write on my status what I have done and ponder what I will say in response, and I think back to how I was always very careful when I made a promise to my kids and how I bent over backwards to keep it, even when sometimes it became very difficult to do so. It was very important to me that they knew I meant it when I said something. Whether it was something they were looking forward to; like going to the beach for the afternoon; or not - like leaving the grocery cart in the isle and going home if they didn't stop screaming (and adding that, if that happened I wouldn't be happy so I would make sure they wouldn't be happy).

Then I realized I couldn't say 'just ask my kids how far I will go to keep a promise' because I broke two promises I made and thus broke their hearts.

One day after a particularly bad argument with their father, when our marriage was failing at a rapid rate, I went upstairs to find them together in one of the bedrooms, faces drawn with the stress of overhearing what had just transpired downstairs. I sat down on the bed and I told them that, as bad as things were, I was in this until death do us part, as I promised 22 years ago, and that I promise now that I would never leave their dad. The relief was evident on their faces because they knew by now, as 2 teens and one 21 year old, that I never said something if I didn't mean it.

About a year before I left, we bought my youngest daughter a Chocolate Lab puppy. Shonah had been dog crazy all of her life. Before she could speak or walk she would bounce in the stroller every time she spotted a dog, huge grin on her face. We had several dogs in the ensuing years and never kept but one till they died, for various reasons. One bit a small child so had to go. Two that we got together, brother and sister, would NOT stop barking no matter what we tried and it was driving us and the neighbours crazy so they had to go. A few were untrainable, I am sure that was our fault but I don't know what we were doing wrong. For one reason or another, every dog we had but one - which we got when she was about 8 and she died two years later of cancer - we got rid of prematurely. All but one we sold or gave away to other families. The one that bit a child had to be put down. But each separation broke my little girls heart.

When she was about 15 we talked a lot about getting another dog, one that she could breed and sell the puppies, and so would be entirely her dog and her responsibility. For months she poured over books about various breeds and finally settled on a Chocolate Lab. It was an all-around awesome breed; beautiful to look at, gentle, good with kids, playful, and they were very popular so it would be easy to sell the puppies, when the day came. My husband and I decided to buy a puppy for her while she was away working at a summer camp and have it completely trained by the time we picked her up, 6 weeks later. It would be a huge surprise and it would give me uninterrupted time to make sure the dog was properly house trained.

I bought a book on training dogs and followed it to the letter. In four weeks Hershey was completely house trained, could follow over a dozen commands by word or hand signals, and knew that, when we were relaxing, she had to lie still at our feet. It was like a miracle. I had never had a dog so well trained. And when we showed up at camp to pick up Shonah, she was not only surprised but overjoyed.

I had put one of Shonah's sweatshirts into the crate that Hershey slept in each night along with a blanket her mother had slept on (we took a blanket to the breeder when we first picked the puppy out of the litter and had them put it in where the mother and puppies slept for the 2 weeks before we could pick Hershey up) and so when Shonah took her into her arms, the dog went crazy. It was as if she was meeting her long-lost mother. I remember looking into the back seat on the long drive home from Kelowna, the puppy blissfully nestled into Shonah's neck and Shonah blissfully happy.

When I left their father, Shonah came with me before I even had a proper place to stay. We left Hershey with her dad until I found somewhere to live that would let us have a dog. It was a while before that happened and when we finally moved into our town house, we took Hershey with us.

We soon found out that, while I was at work all day and Shonah was at school, Hershey barked incessantly. I was homeschooling Shonah up until I left my marriage; I had been a stay-at-home mom all the kids lives, so the dog was never alone for long periods before this new situation and she just couldn't handle both of us gone for hours a day. After a few months of this, the stress of it with neighbours that weren't complaining to me but were to each other (and one who was a good friend finally told me) led me to decide that Hershey would have to go. It wasn't fair to her to be cooped up all day. She was a two year old lab; she had boundless energy. She loved being with people. Being cooped up alone in the townhouse all day had to feel like being in jail. Shonah saw the reasoning in this but was heartbroken at the thoughts of parting with her. The day it happened was a very dark day in her life, and thus in mine. She sobbed inconsolably for days. For months after, any time she saw a Chocolate Lab she burst into tears. I felt like the worst mother ever.

Thinking back on it today, I start to cry. I am devastated at the memory of breaking her heart so many times with each dog we failed to keep. But especially with Hershey because I promised her faithfully that this was the one dog we would never get rid of. And especially with leaving her dad when I promised them that day that I wouldn't. I broke all three of my children's hearts when I broke that promise.

I am so very, very sorry for it. I am as sorry as anyone can be. It will be my deepest regret to my dying day.
Posted by Sandy Montgomery at 9:19 AM 3 comments: