For people who find this blog during a search about getting dental work done in Mexico, I want to be very honest and thorough in reporting anything that happens during my dental work that I am either not happy with or should not have happened.

To that end - when the Dr. Arce had finished all the prep work for my new crowns and the temporary piece was in place, he gave me a small pill to dissolve under my tongue. He then gave me several more doses of the medication to take over the next few days. He told me not to forget to take them, dissolved under the tongue, one pill every six hours. 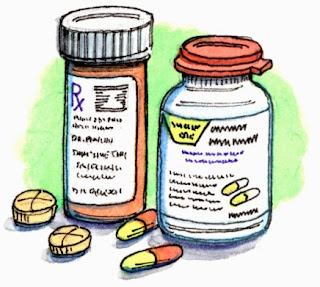 I have been taking them faithfully. Last night I was experiencing a lot of sensitivity in my upper teeth and was worried I might not be able to sleep and thought I might take some of the Xanax I have as it makes me very sleepy. I decided I better check first to make sure it was safe to take with the drug the dentist gave me, Dolac (Ketorolaco). I did a quick internet search and what I discovered startled me; while perfectly safe to take with Xanax, it is NOT safe to take with Naproxen - a prescription drug I take twice daily for chronic pain in my lower back - as they are very similar. Not only that, but one should avoid exposure to sunlight while on it - and I laid out in the sun for 3 or 4 hours yesterday.

What I read:
Do not use any other over-the-counter cold, allergy, or pain medication without first asking your doctor or pharmacist. Many medicines available over the counter contain aspirin or other medicines similar to etodolac (such as ibuprofen, ketoprofen, or naproxen). If you take certain products together you may accidentally take too much of this type of medication. Read the label of any other medicine you are using to see if it contains aspirin, ibuprofen, ketoprofen, or naproxen. Do not drink alcohol while taking etodolac. Alcohol can increase the risk of stomach bleeding caused by etodolac. Avoid exposure to sunlight or artificial UV rays (sunlamps or tanning beds). Etodolac can make your skin more sensitive to sunlight and sunburn may result.

The box and instruction sheet that came with the medication are all in Spanish so I couldn't read any of it, so perhaps the warnings are on the sheet. But Dr. Arce knows I don't speak Spanish and I trusted him. Except he didn't know I was on Naproxen because the form he had me fill out, while asking if I was allergic to any medication, did not ask if I was on any medication. An oversight that I did not notice at the time but now recall that any form I have ever filled out at a medical office has asked that question.

What really sticks out to me in all of this is how I asked Dr. Arce if it was okay for me to take two Xanax before he started working on me (after the exam and assessment - I wanted to be in my right mind when agreeing to the work) and he asked to see the bottle. He was very happy I had asked and brought the bottle because just a few weeks ago he had a patient who had taken valium at home before coming in for his work done and did not tell the Dentist. Dr. Arce then asked him if he would like something to calm him down and the patient said yes, and so gave him valium to take. During the procedure, the man fell into a deep sleep and then stopped breathing. Dr. Arce performed CPR (breathing only) on him and after a minute or so the man took a big gasp and then said, "Hey Doc, are we done?" Dr. Arce chided him for not letting him know that he had taken valium already.

So you would think that asking about meds would be something he would do now. I have written him an email telling him what I have learned about combining the meds I am on and noted that I didn't see anything on the form he gave me asking if I was taking any.

And today I have to decide which I want to have paining me all day - my mouth or my back?

UPDATE: Dr. Arce got right back to me by email and said that there would be no issue combining the two drugs as the dosage of Dolac he gave me is very small. Which is good BUT, I still think his form should have a section that asks if you are taking any drugs and what they are.
Posted by Sandy Montgomery at 8:54 AM No comments: