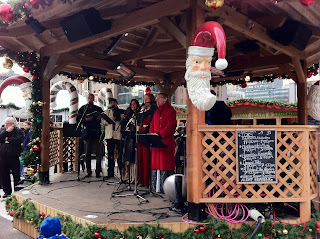 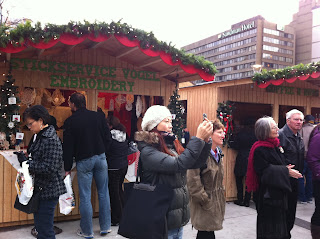 I decided that I am sick and tired of sitting around the house on my days off, so I got myself together and went downtown Vancouver to see the brand new German Christmas Market. What a huge disappointment. It looked nothing like the video on the website. It was tiny, had a bunch of little stalls selling overpriced food ($8.50 for a small plate of raclette cheese over two slivers of French bread, a shaving of ham and one pickle). I was so excited when I saw the raclette stand because I had some in Borough Market in London, with cooked and thinly sliced potatoes, and it was amazing. I was dismayed to see that there were no potatoes involved in this version. 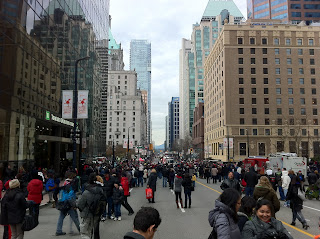 I spent about 20 minutes wandering around trying to find something worth the $5 admission, but left without seeing it. All I saw were line-ups for the food and another long one for the big(ish) tent with all the German ornaments and nutcrackers in it. An hour and a half line-up. No thanks.

So I headed down to The Bay and went inside to warm up. The place was a ghost town because of the Santa Clause parade just down the street that was so packed I couldn't get anywhere near the front to see a thing. I texted a friend (who had posted on her FaceBook page that it was insanely busy on the streets and to stay away) to see where she was and if she wanted to meet up. Turned out she was in Pacific Center, which is attached to The Bay. So we met up for a bite to eat and then went our separate ways. I went up to the 5th floor to see the Christmas displays and was not disappointed. The pictures don't do it a bit of justice. 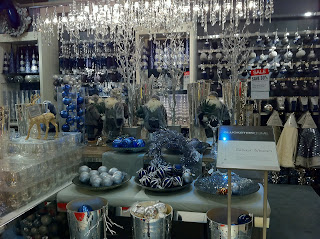 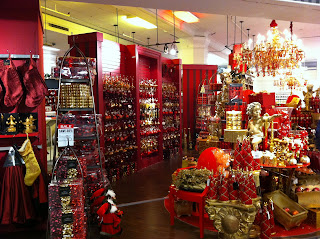 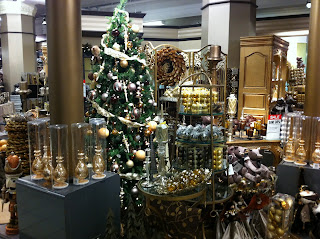 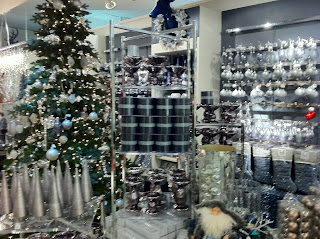 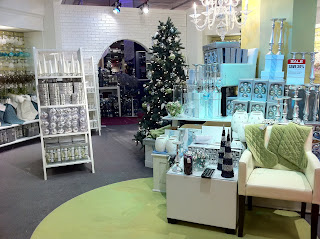 After browsing the 5th floor, I went down to ladies clothing and found two fabulous tops to wear over the holidays in Palm Springs - 40% off and then another 15% off. I love them both and am thrilled. If I get a decent picture taken in them I will post when I write about the trip. But I am not holding my breath, I have gained some weight in the past three months of working on set - no exercise and eating whatever is prepared for us instead of what I would eat normally - and that will result in horrible photos of me that will be instantly deleted. And it's tough to say no to the chocolate tray that comes out after dinner at work. But say no I will have to do as my back is starting to give me constant trouble again and that's a sure sign I have crossed the limit of what my body can handle in excess poundage. For someone who ate whatever I wanted all of my life and was skinny as a rail until I had kids, this whole being fat and having to think about food and dieting all of the time is one huge downer. You know, after all of these years of being overweight, I still see myself in my minds eye as being slimmer than I am. It's weird how that happens. I am sure you've heard of the opposite for people who were heavy and then lost it all. Well it happens to us once-were-skinnies as well.

Salad and water, be my new friends.
Posted by Sandy Montgomery at 11:40 PM No comments: