The day dawns sunny with puffy clouds high in the sky. I have decided to go back to Sopers Hole to Serendipity Spa and have a body scrub, rain or sun. I am still peeling and it looks disgusting. They said that the treatment would get rid of all of the dead skin and I don't want to go home looking like this.

When I get there, the fellow I spoke to yesterday isn't there, it's two women. They are from India and they don't speak English very well consequently I can't make them understand what I want. I have decided to have the package that includes a massage and facial along with the scrub. They call their boss, the guy from yesterday, and I tell him what I want. I hand the phone to one of the women and he translates.

The room for the massage etc. is right off of the reception area, divided by just a curtain. And the curtain at the moment has enough of a space between the two panels that I can see inside. I don't like that much - I like privacy.

I go in and get ready and she starts with the body scrub. It feels and smells great. After about 45 minutes of scrubbing she tells me to get in the shower and wash it all off. I am kind of horrified when I see the shower. It's tiny, it's old, and the door is a DOOR - like a wooden door so no light gets in except for a small window in it. I ask if there's a light but there's not. So I leave the door open a bit while I shower off. This is certainly no luxury spa, but their prices hardly reflect that. Someone had suggested, when I asked on TTOL what to do in the rain, to go to the spa on Peter Island. I wonder what that place is like.

I get back on the table for the massage part and it feels great. 45 minutes later, she says she is done. I ask about the facial. She looks confused. "Facial? You want facial?" "Yes, I asked for the package." "Package? You want package?" Oh dear. She calls her boss. I ask, "What did I just have done?" "The body scrub." "That's it?" "Yes." So I decide to leave it at that as it seemed to include the massage and is almost $100 less than the package, meaning the package wasn't really all that good of a deal at all.

I leave there well oiled, my hair as well as she did a scalp massage with oil, so I go straight back to my hotel to wash my hair.

It's still a nice day out and I decided to go to Cane Garden Bay for one more visit. I like that beach as the water is really clear and the bottom all sand. And on Sunday's The Elm has a famed bar-b-que and live entertainment from a band called The Elm Tones that I have read about on TTOL and it's supposed to be very good.

It starts to rain as I am driving there.

When I pull into the parking lot behind all of the bars, the rain has died down to a drizzle so I head to the beach. All of the wind and rain from the previous day or so has fouled the water. It is just like Anegada - no longer crystal clear and clean. I can't see the bottom at all. Bummer! And I braved that horrible hill to get here!

I go up to Myette's bar and see one of the couples I met from the last time I was here. We sit at the bar and chat for an hour or so until the sun comes back out then I head to the beach for some rays. I find a spot where the water is actually still quite clear and walk in but right away the white angel fish start bumping my legs again. Did I mention that from before? The same fish that followed me around Loblolly Bay are here but these ones bump into my legs and arms and nibble at me. It doesn't hurt but it freaks me out. So, today, I never get in above my thighs before I have to turn and dash out as fast as I can.

I decide not to wait for the bar-b-que to start as it's 4:30 and it doesn't get going until 6:30 and the music at 7:00. It's that darned road that I hate driving, especially at night. It's stressing me out thinking about it and it doesn't help that I can clearly see the cut in the trees for the road down into the bay from the beach and I keep looking at how high it is where it starts and how steep it is. As I really enjoyed the ribs at Myette's the other day I decide to order them again and then go home. 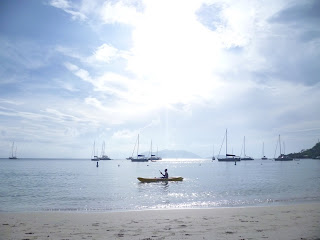 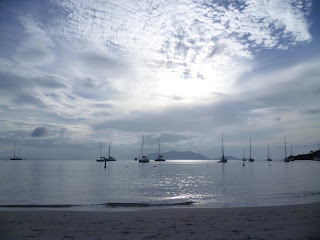 Cane Garden Bay.
As I am just finishing up, the very handsome bar tender, who has the day off today, walks in from the beach and goes behind the bar to make himself a drink. He is talking with the other bartender and I can hear a very British accent that I didn't notice when I was here a few days ago (because he hardly spoke). I ask him where he is from and he says 'London, born and bred." He's only been here for 14 months. I ask him what brought him here and he tells me he was writing a novel set in the Caribbean and wanted to be here to learn more about the people and the culture. He's ready to leave though, he doesn't like the smallness of island life or the work he is doing - bar tending. His dream is to live in New York and be a published author - he's just finished his novel. He gives me his web site address and I promise him I will go have a look at it. I give him my card and tell him if he ever writes a script, email it to me. 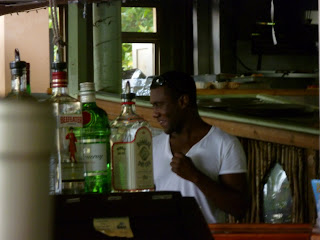 Stephen, the handsome bartender.
It's dark by the time I leave so I could have stayed for the other bar-b-que after all, which I can hear is in full swing just down the beach. But I am okay with it and eager to get the drive over with. To be honest, the worst part of the drive going back is meeting another car coming at you on a curve as you head down the hill, and as long as that doesn't happen it's not as bad as going up - that's just awful, cars or no cars. And, happily, I don't come across any cars on the curves. I so wish there was a way for me to accurately convey what it's like going up hill, coming to one of those hairpin curves when you're on the inside. The blacktop is actually vertical right in the elbow of the curve. I wish I could stop to take a photo of it to show you but there's NO WAY one can stop on those hills... you'd never get going again. I've heard stories of people rolling back because they were going too slow. Terrifying.

I get back in time to watch the end of Celebrity Apprentice on the TV instead of having to download it like I have done for every other episode. John Rich won! YAY!!!
Posted by Sandy Montgomery at 5:37 AM No comments: