So I realized today that I tossed out my Nikon with the forty dollar battery still in it. Great. Just great. It fits my old Nikon so would have been nice to have as a third spare.

I have been spending the last week or so writing. Well, not exactly writing YET. More like preparing the framework for my script so that, when I do sit down to write, there won't come the usual point, about half way through, where I am stumped and don't know where to go from there OR to realize that I am half way through the amount of pages I need but only a quarter of the way through the story itself. It's been challenging to say the least. I am working through a screenwriting course with my story idea and it is forcing me to look at things like motif, subtext, hooks, payoffs, symbolism, metaphors, crisis and climax.... all sorts of stuff that I normally don't think about at all. I just sit down and start writing. Probably the reason why I have only two completed scripts and about 5 that I abandoned somewhere in the process. So hopefully, I can figure out all of this and apply it to my story so that I can just sit down and bang it out and end up with something that is marketable. Here's hoping. 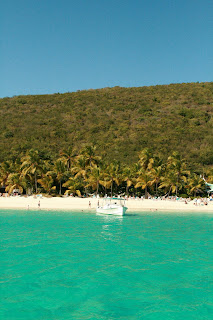 I have gotten pretty discouraged this week over feeling 'stuck' here. I really want to be sailing the Caribbean. It's something I feel compelled to do and I know I won't settle until I've done it. I am not getting any younger (who is?) and my knee and back give me a lot of trouble one day and then are fine the next. I feel like I have maybe 6 or 7 years before they become so bad I won't be able to sail. But all for the lack of money, I can't get out there and do it. I have someone who is ready to take me on board and all I have to pay for is my flight and food, but I just don't have it. It's frustrating to have money be the reason for keeping you from doing what you really want to do. I guess it's the same for most people though. I was talking to a friend today who has friends with lots of money. She was saying how it strikes her, from time to time, how stuff that is a huge concern to her - they don't even think about. What is super frustrating is that - a couple of shows, and I'd be set to go for 6 months. But, despite predictions to the contrary, it seems that the work this year is marginally better than last. The strength of our dollar right now means even more so that producers will look to Toronto, if they're set on filming in Canada. Their superior tax credit will make up for the dollar.

So as I send off my resume to productions that are planning on shooting here, I dream of azure sea and warm Caribbean breezes.
Posted by Sandy Montgomery at 2:20 PM 3 comments: