Woke up at 6:30 but dozed till 8. I get up to see Alessandra on the couch on her iPhone and Rick at the computer and there is a sink full of two days worth of dirty dishes.  As it seems I am pretty much on my own for meals, this is the last straw... am I expected to do the dishes?  And I say exactly that. Rick mumbles something about them just having gotten up themselves. Whatever. They've been there since yesterday afternoon and they were both on board for well over an hour while I was at the pool and Alessandra was aboard alone for three hours while Rick and I videoed the girls singing last night.  I am getting the distinct impression that this is not a real charter so I guess I won't have to leave a real tip. I was prepared to leave 20% of the value of the prize but that is not going to happen.

Rick leaves to check in to customs and they charge him $140 EC and he isn't happy. He was checked in for 3 months already and I was checked in for the same at the airport when I arrived. I give him $100 EC as it is because of me, but I am not thrilled about it either. Seems like a money grab by the gov't aimed at sailors as I didn't have to pay anything to check in for three months at the airport.  And really, once you're checked in you should be able to come and go in that time without another fee.

At 11am we head off to Hog Island so that we can be there for the bbq later this afternoon. It's a nice motor all the way and I have a short nap. We get there at 1pm. We anchor close to the beach and, interestingly, Alessandra asks me if I am hungry and when I say that I am, she prepares herself a dish of avocado drizzled with olive oil and plops down in front of me and eats it, leaving me to myself. I eat the rest (4) of the gingersnaps.

We hop in the dinghy for a tour around and so I get to see Calvigny Island.  It is so cool to see so many of the places I've read about on Mike and Rebecca's blog. 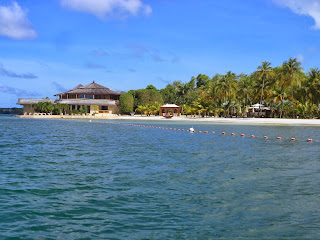 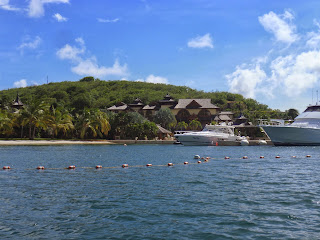 We pass by the burnt out hull of a brand new yacht that caught fire a few months before I arrived in the islands, right in Prickly Bay. It burned everything but the aluminum hull. Such a shame. The guy who bought it has it tied alongside of a huge tug boat he owns and he has started to patch the hull with plates of steel riveted onto the outside of the shell. But the whole thing is so warped from the fire, I can't see what the point is nor how anything can ever be made of it.

It is an observation of mine that there is a great variety of people anchored in this place. Some of the boats are at least 50 feet, sleek and pristine. Then there are boats that are the water version of a gypsy caravan with all manner of 'junk' hanging from the lifelines and tied up anywhere else they found to stash stuff. The ropes are frayed, the hulls are small, faded, and some even rusty, with the sorriest looking excuse for a dingy floating behind and both the dingy and the boat needing some good old fashioned elbow grease. Some are obviously home to a lone sailor and some to young families and others to wealthy retirees. It's quite the mix.

We stop in at Clark's Court Marina, a tiny dive of a place, for a drink and watch the last 20 minutes of Hugo on the large TV over the bar, along with another half a dozen or so very worn-out looking customers.

We get over to Hog Island for the bbq dinner at Rogers Bar. The place is very rustic with a sand floor and cobbled together half walls and roof, open on the front to the beach. Strangely there is no music, not one note the whole night. The food is really good although the only chicken is all legs and I usually only eat white meat but I strip that leg down to the bone! At $25 EC it's a bit steep. Rick and Alessandra share one plate between them.

I meet a great guy named Bruce from a boat named 'Sold the Farm' and it turns out he is from Alberta (how is it that all Albertans are such lovely people?!) and he really did sell his farm to buy a boat and move to the Caribbean. His crew is a lovely girl from Switzerland, Regina, and I have a great night talking with them. He is so nice and someone I'd be happy to sail with. Wish I was more suited to it - read: young and fit! Oh to turn back the clock knowing what I know now! 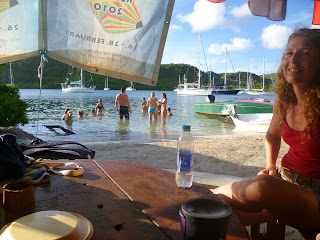 There are a lot of full-time cruisers and a handful of locals at this bbq and what a motley bunch! And such drama! One lady comes over and starts talking about her ex boyfriend (who is also present somewhere here) with Rick and as I listen to both of them it dawns on me that as much as some people are here to escape life, they just bring all the drama with them. I get the distinct impression that most of these people never leave this anchorage. They're not really cruisers, they just happen to live on a boat in the water. And they have the usual gossip about those they live near. Looking around I, once again, get an overwhelming feeling of not belonging. As much as I dream about living full time on a boat in the Caribbean, hanging out with this crowd is not for me.... I have nothing in common with them and I despise gossiping. And although I don't think this trip is a great gage of how I'd do as a full time live-aboard, I am feeling like it isn't for me. But I never did want to live on a mono-hull sail boat. A cat (or a nice big luxury yacht - hahaha) is the only way I could go, if I could go for it at all. 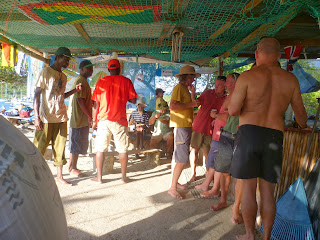 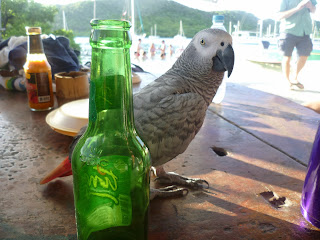 I need to figure out what it is I want.  At 55. HA! I say that as if I have choices as to how I will live out my retirement. I don't. Not at this point in my life and not unless there is a dramatic event that brightens my prospects; I will be working till I drop dead.