I woke up far too early this morning - 5:30am.  I guess I am all caught up on the one night of no sleep and now jet lag has kicked in.

No sign of the storm of last night with just light cloud overhead. Today we set off for the Grenadines! We will go as far as Carriacou to overnight there.

We set of at 8am and motor sail up the coast of Grenada. It is so gorgeous. I make french toast and turkey bacon for breakfast for Alessandra and me (Rick only eats cereal) and it is delicious. 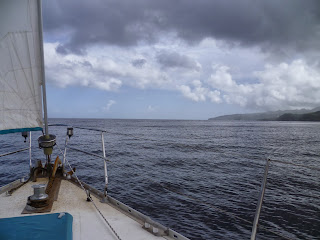 On our way up the coast of Grenada


The wind is on the nose so once we pass the protection of Grenada, we are bashing through waves for hours and I start to feel nauseated again.  I eat a couple of gingersnaps but crumbs from one goes down the wrong way and as I start to cough, I realize I am going to, literally, toss my cookies. I know I won't make it below to the head and grab at a pail that is tied to a rope near the stern of the boat. Ugh.

Rick decides that it would be a good idea to just keep going to Union Island and asks me what I want to do. I have no idea as I don't know what I'd be missing bypassing Carriacou so say whatever he wants to do is fine with me. So we continue to bash our way north past Carriacou.  We give a wide berth to the phenomenon known as Kick'em Jenny. Law states there has to be a 2 mile circle of 'no sail zone' around the submarine volcano.  I am fine with that. 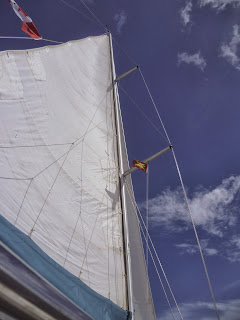 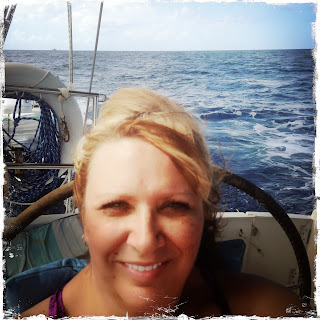 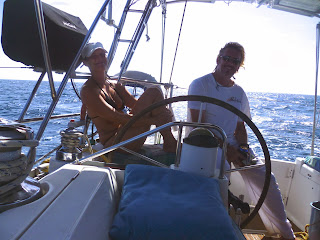 Rick and Alessandra at the helm

At one point, I head below and when I climb the steps to go back up, I stub my toe really really hard on a step.  It hurts like the dickens and I think I might have broken it.  A couple of hours later, I have a bruise that shocks Rick - I guess he didn't believe me when I howled and said it hurt like the dickens! 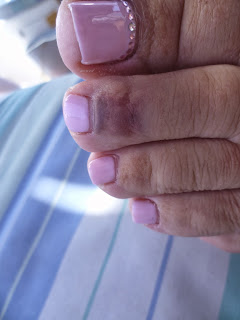 As we approach Union Island and begin to sail to the northern end, I am stunned by the beauty of the island.  There is nothing but trees, no houses, no other buildings until the north end, and the profile of the mountains against the sky is really cool.  The highest peak is Mount Taboi - 999 feet above sea level. 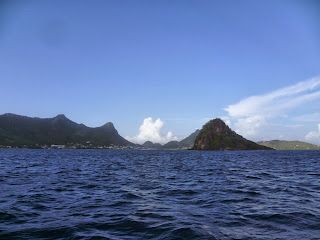 We anchor behind the reef just off shore from the town of Clifton and just ahead of the bow is Happy Island, a place I have read of and dreamed of visiting. I am almost beside myself with excitement at finally being right here, so close to it. 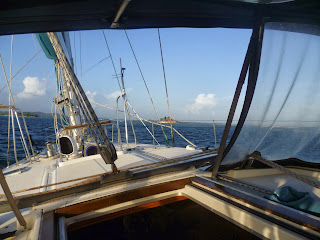 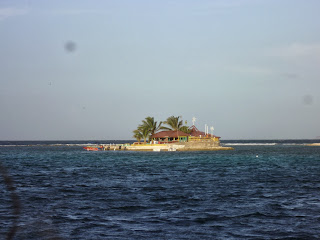 For those who don't know, Happy Island is man made - all built by a Rasta named Janti who piled conch shells on the reef, cementing them together until he had a platform big enough to build a small bar.  Over the years he has added to the base and now he lives on the island in a small beach house to the rear of the bar.  It is a popular spot with cruisers. 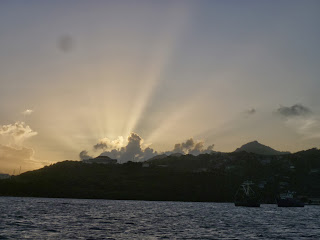 The Sun setting over Union Island as we anchor 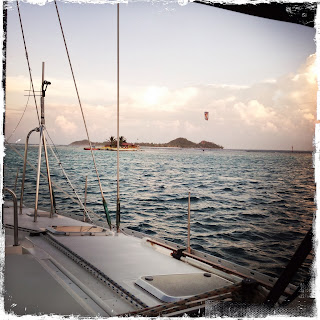 As soon as we anchor, we hop in the dinghy and head over there.  Janti is behind the bar, looking like he could be Whoopie Goldberg's sister, and he has just finished smoking a fattie so he is in high spirits. He has caribbean music blaring from a stereo and he holds a microphone and is singing along to the lyrics. There aren't many people on the island, just Jaunti and a female bar tender, and half a dozen cruisers all from the same boat. We order drinks (Ting for me) and enjoy the entertainment. Rick and Janti know each other from all of Rick's years on the water and visiting this place, so they chat although I believe having a conversation with Janti is proving a bit of a challenge. 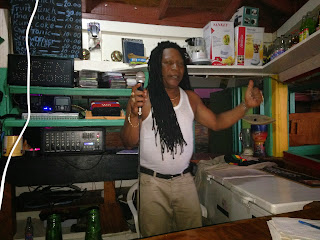 You can hear, under the music and Janti's singing, Rick explaining to me how Janti built the island

We head back to the boat for dinner. I had put a pork tenderloin in the cart the day we provisioned, intending to make pulled pork one night but turns out, you can't slow cook for 5 hours in a boat oven (I did ask Alessandra if it was okay before putting it in the grocery cart, and she said it was) and Rick is horrified when we propose it. Apparently that would drain all of the propane.  So instead, we slice it thin and fry it in a pan with some bbq sauce. Alessandra doesn't want any help so I head up top to read as she washes and slices the potatoes to go with it.  When I go down a bit later to check on the progress, I am dismayed to see that she has added the raw potato slices to the pork mix. I was planning to cook them separately and add a bit of butter when they were done. Now everything is going to taste the same. And no other vegetables are prepared so that is dinner.

When I head to bed, as soon as I start to drift off, it rains. I jump up and close all three hatches in my quarters and crawl back into bed. I wake up later hot and feeling like I can't breathe. The rain has stopped so I open all the hatches.  SO much better.  Then I wake who knows how much later to rain falling on my face and jump up to close them again.  This is repeated many times throughout the night.


Posted by Sandy Montgomery at 11:43 PM No comments: