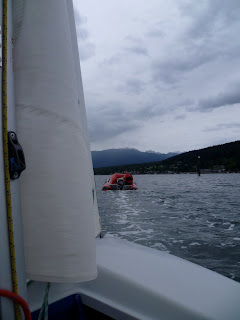 So today I took the first step towards going sailing. Well, the first proper step. Leaving everything behind a year ago to join a sailboat that was planning to do charters in the Caribbean was a pretty big step. But we all know how well that went. So when I got back, I decided that I would start over; sign up for some sailing lessons; have a few thou in the bank; and drastically reduce my luggage before attempting that again.

I have definitely culled the wardrobe (am still working on the hair products); the bank account is far from healthy; and today I learned how to tack.

When I looked into lessons, I found that the Rocky Point Sailing Association in nearby Port Moody gave private lessons. With my film schedule, there was no way a regular class was going to work. I was apprehensive as to how much private lessons would be but when I discovered that it would take less time to go through the White Sail 1, 2 and 3 programs privately than in a group setting, it actually ended up that it would be cheaper than the scheduled classes. Then Kim, the DP I work with, said he'd like to join me. That cut the price almost in half. So a real bargain.

We arrive at the dock and eventually find our instructor, Connor. He said he was at the dock but he's actually up at the building where they keep the PDF's and sails. To both Kim's and my surprise, there is to be no theory first. We go straight down to the docks and help launch the dinghy that will take us over to the dock with the sailboats. As usual, I have to have someone's hand to hold to get in and out of the dinghy. My knees are losing strength and just aren't able to lift me up and down like they used to. I remember my doctor predicting knee replacement surgery in my future back when I was in my 20's. I think that time is almost at hand.

We learn how to get the sails out of the bag and up onto the mast and boom. I reach way back into the dark recesses of my mind to remember a couple of knots we need but I need not have strained as Connor teaches us the knots right there. I master the 'figure eight' pretty quickly. We learn how to attach the rudder and tiller and lower the keel. Then we take turns sitting in the boat, while it is still on the dock, to learn how to maneuver the tiller and switch sides, to tack. It's tricky. And it takes me a couple of tries to figure it out.

Soon we are in the water and Kim takes the tiller first. I sit up front and man the jib. I have to cleat one sheet and release the other and pull hard to bring the sail to the same side the boom is swinging to. I get the hang of it pretty much right away, although Kim's first tack is really tight and the boat heels far over. I don't like that much. I learn to reposition myself to keep the boat balanced and Kim doesn't tack that hard again. I have to say that the little (and I do mean little) seat I have to perch on in the front is very, very uncomfortable. The end of the keel sticks up about half an inch and is no fun to sit on. I could really use a cushion or padded shorts! 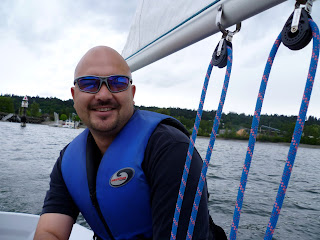 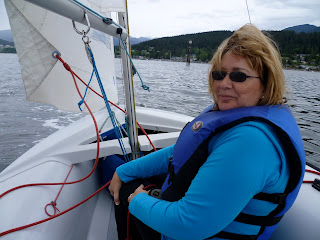 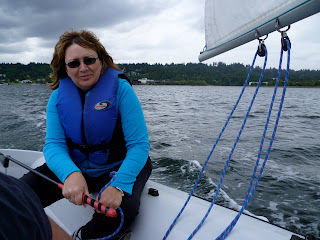 We tack back and forth for about an hour, with our instructor motoring along side us in the dinghy, and get into a bit of a rhythm. Eventually we luff the sails (let them relax so we stop) so that Connor can talk to us for a bit. He tells us that we are doing really well with coordinating the sails from side to side. He says he hasn't had first time students do so well.

Then I take over the tiller.

I am a bit nervous because the wind has really picked up. I determine not to make a sharp first tack like Kim did and so move the tiller arm away from me slowly and the boat responds by gently coming about. Then I get up and move over to the other side, remembering to duck for the boom, sit down, and deftly switch hands on the tiller and the mainsheet. For some reason the boat is still turning. I can't figure out why, in the split second I have. Kim is calling out some sort of instruction to me but I am too flustered for it to sink in. Connor is calling out as well. We're heeling over and I don't like it. I feel completely out of control and I am close to panic. Then I finally hear what they are saying. STRAIGHTEN OUT THE TILLER. Oh right!! I totally forgot about that part. I quickly straighten it out and we even out on the water but now the boom is on the wrong side again and so I have to switch sides. I don't want to. I just majorly screwed up switching sides and I am not ready to do it again right away. But I have to so I do. This time I can't seem to sit down on the side without the tiller arm under my butt. I keep trying but I can't get it out from under me. I start laughing. Kim is laughing at me as well. I finally figure it out but I am no way ready to keep tacking. It must be painfully obvious because Connor comes over with the dinghy and ties us up to it and tows us along, weaving back and forth a bit so that I can get used to how the boat steers.

I do pretty well. After a bit he cuts us loose and I try a couple of tacks and then it's time to head back into the dock. We release the sails as the wind has died right down and we 'run' back at a very slow pace. I am so glad for my past days of boating because I know the markers and what they mean, so I keep the red ones to starboard and the green to port. With Connors instructions being called from the dinghy, I bring the boat right up to the dock, nose first. I do a pretty good job of it and Kim says 'nicely done', which is encouraging.

Now if I can just get him to say that the next time I attempt tacking.
Posted by Sandy Montgomery at 6:28 PM 2 comments: