We weren't to be at Ron's until 11:00 so I tried to sleep in but really couldn't. I was itching to leave by 10:30 and still not feeling that great from the MSG I ate two days ago so I headed over to the Rite Aid for some Immodium. While I was there, I picked up two 1.75 liter bottles of Malibu Rum for $16 each. They would be over $50 each at home.

I arrived a little late, for once, and the gift opening commenced almost immediately. With a chocolate filled croissant in one hand, and a mimosa in the other, I took a seat with the sunshine warming my back and settled in for a good couple of hours. 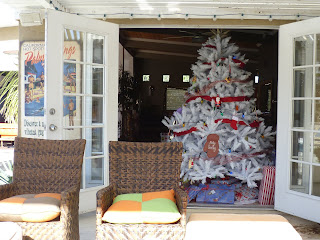 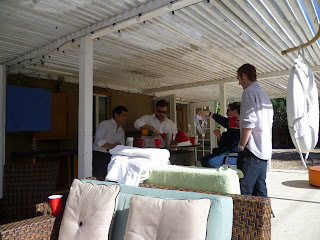 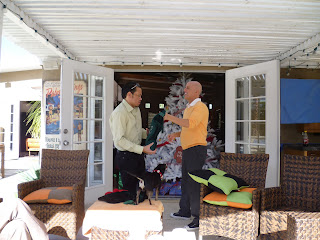 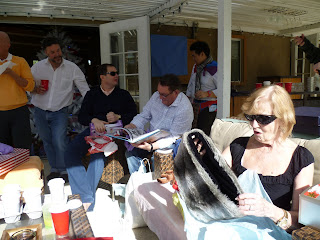 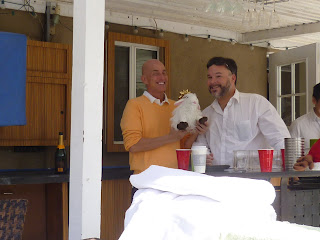 I am always amazed at the fun gifts Ron always manages to find. He gave Matt a stuffed toy goat that sings 'Lonely Goatherd' from Sound of Music; coffin cufflinks to Micheal that actually open to reveal a vampire inside; Spiderman head cufflinks for Nelson; and Malibu Rum flip flops for me - to name a few. He gave me a set of pens that look like the ones businesses have their info on, only these are all very rude businesses. He said they would dissuade people asking to borrow my pens on set!

Michael gave me a bottle of one of my favourite perfumes, Mediterranean by Elizabeth Arden, and then I knew why my daughter had asked me what expensive perfume I was out of. I thought it was because they wanted to buy me some at the Duty Free on their trip to England and I told her not to spend her money, that I didn't need it. But now I have it again and am really pleased.

Once the gift opening was over, it was almost 3:00 and so I headed home for a long nap and then to get ready for the glamorous dinner Ron has catered each Christmas.

This year I arrived spot on time (not early like last year) but still got scolded for not showing up late. It really isn't in my DNA to be late, I told Ron; I can't help myself. I even tried to be late this time.

The guest list included some rather famous names; Chris Rice (Anne Rice's son) among them. There was also a well known director (who shall remain nameless) whom I found to be rather loud, dominating any conversation he was a part of and constantly lauding the gift of a cheese selection he and his girlfriend, who couldn't keep her hands or lips off of him, had brought to the party. They seemed to not understand why none of us were eating any of it - seemingly oblivious to the fact that they had arrived very late and we had all just eaten a rather large turkey dinner. It didn't help my opinion of them both when they plopped down on the floor of the living room, after just handing Ron a huge box wrapped up in Christmas paper and tied with a bow, exclaiming how much he would love the gift - how the store they got it from was full of things he would love - how they felt whatever they got him from there, they couldn't go wrong - and how much he would love the gift they did get (I say that twice on purpose because they must have said it fifteen times) BEFORE he even opened it. He talked on and on while Ron opened the gift, on and on after it was opened (I honestly can't recall what it was - maybe martini glasses?), and on and on the rest of the night. At one point, Ron's gaze met mine and we both started to laugh at the absurdity of it - and the fellow talked on and on totally oblivious.

Despite all of that, it was a lovely evening with Ron performing a fabulous magic trick where he guillotined a guests hand with no harm done, with another amazing Christmas Buffet by the wonderful chef, Paul Hietter, and with a very chic guest list, and lots of love and laughter. 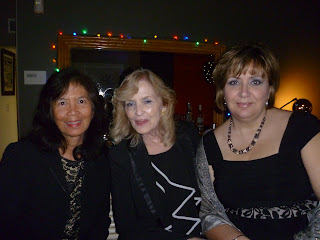 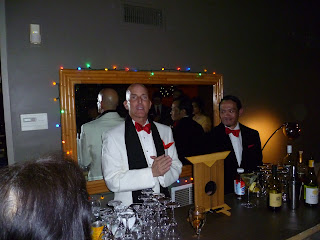 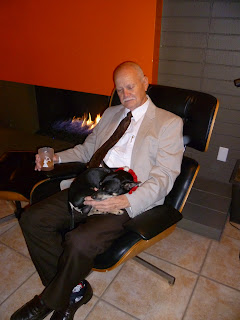 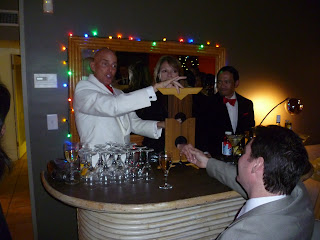 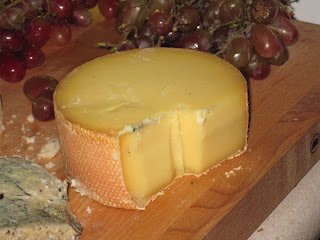 THE Cheese
Posted by Sandy Montgomery at 10:34 AM No comments: