WORKING IN THE CARIBBEAN

On my last trip to the BVI, in May of 2011, one of my goals (my only 'goal' really - other than wanting to explore as many beaches as possible and to survive driving those roads) was to meet as many locals as I naturally could and get to know about them and their life on the islands. I ended up meeting lots of great people, both local and visitors, and absolutely had the time of my life.

There were a couple of people I didn't get to meet that I had hoped to. One was Rick Moore; a Canadian expat from Barrie, Ontario (Brrr!!) now living and working in the Caribbean islands. And when I say 'working' I mean that in the most laid-back sense of the word possible. I am sure, were he here to defend himself, he would protest vehemently that he definitely works hard for a living but he'd get no sympathy from me. He is 'working' and living my dream life so any protestations would fall on deaf ears - "Yeah, sure buddy. Hoisting that sail must be murder in the bright sunshine you get every day. And finding enough beer to keep your charter customers happy must be a real grind. And don't even get me started on how stressful it must be to get into a popular anchorage before all of the mooring balls are taken." Cry me a river!

And you should see the places he calls his 'office'. Pfft! One of Rick's 'offices' 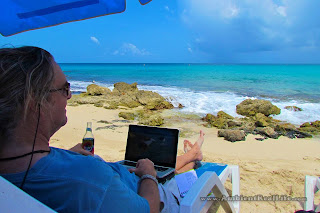 ...and another
If I sound a little bitter, maybe I am. But as it's almost St.Patrick's day it could, rather appropriately, better be described as GREEN with envy.

As I waste my life trapped in Canada, spending a considerable amount of my free brain space trying to figure out how I can live part time in the Caribbean and make a living there, Rick is forging a fabulous life for himself in paradise. He has been running his successful charter operation out of the BVI's on board Sophisticated Lady for seven years. On his FaceBook page one, should they be as obsessed as I am with all things Caribbean, can keep up with his travels and current charter guests. I might add that it has not passed my notice how he manages to have a revolving door of very attractive young women as crew on board - another reason he gets no sympathy from me. Tough life indeed!

I perked up considerably the first time I saw a photo of Rick wearing gear similar to that I see all of the time, worn by the Stedicam operators on set. I had a faint hope that he was making a movie where he may eventually need the services of a script supervisor. Or, in other words, me. Alas, that was not the case. 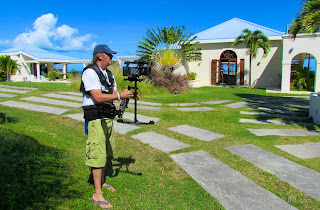 Rick wearing gear similar to Steadicam gear
Turns out that in June of 2011, Rick saw a niche where he could turn his love of photography and videography into a viable business and began to lay the foundations for Land and Sea Video Productions (LASV); a company producing HD videos for people who own recreational properties and/or yachts for lease as an aid in marketing them on their websites. Partnering with Kerrie Lynn Hartt, an adventurous spirit who sold all her possessions and gave up a successful career as Project Manager in the high-tech wireless sector to live and work in the Caribbean, Rick was ready to officially launch the company in December and, from the looks of the website, it has been doing very well.

While on location, shooting the videos, something dawned on Rick:

"We quickly realized while performing our primary tasks fulfilling the obligations of LASV that even though we had a serious job at hand, we were still working in paradise. It would be selfish of us to not take the time and look around and appreciate our surroundings, even while dutifully performing our job at hand."

So they started a sub company called Ambient Real Life (ARL) to capture sublime moments of paradise on video to share with those of us who want to be in the Caribbean but, for whatever reasons, can't be. The goal, simply stated, is;

"...to inspire you, to help you come alive. We can bring you images from all over the world… Images that will relax your mind, feed the soul and lift your spirit. To live life, you have to experience it."

Here's a sample of one of the available videos. It's of one of my favourite places on earth, The Soggy Dollar Bar on Jost Van Dyke. Honestly, I can't say it's like actually being there (where's the warmth of the sun, the sand in my toes, and a painkiller in my hand?!) but it's as close as I could ever come sitting here in rainy North Vancouver. (Although I don't think it was ever this busy the two times I got to visit).

The company is in its infancy. Currently membership on the site, giving access to all of the material, is free. Rick would like to keep it that way.

"Now we're at the point where we've proven LASV and ARL can work, so we're looking for more sponsors for the ARL site to help keep it free for users indefinitely... and (are) looking to take on 2-3 more partners for the LASV business to fund the next 2 year business plan of expansion internationally now that we've taken it as far as we can on our own."

Rick is also looking to add equipment to his kit which will allow him to do arial videos without the prohibitive expense of hiring a helicopter every time he sees the need.

I hope they can find the partners they are looking for because I, for one, would love to be able to continue to freely access the wonderful videos he has made in the Caribbean, and the future ones he plans to make all around the world. Even more, I'd love to be able to join his crew one day.

Be sure to click on the links and take a look at what Rick and his crew are doing. And if you are looking for a business to partner with, and one in paradise at that, this just might be for you!
Posted by Sandy Montgomery at 3:14 PM 10 comments: