A GARDEN IN MAPLE RIDGE

Monday morning, bright and early. Have to be on the new show at 7 am. I haven't had to be anywhere at 7 am for so long, I am hoping I can function at that time like I used to. I get up on time and seem to be awake. I have decided to curl my hair. I tried that out last week with a curling iron and, other than the fact that it didn't stay curly all day, I really liked it. So yesterday I bought some curl defining spray and little zipper packet of rag rollers. Well, they aren't made of strips of rag like I used to do my girls hair with when they were little, but they work much the same way only instead of tying the ends together once the hair is rolled up, these have wires inside and you just bend the ends over the hair and it stays in. Pretty nifty.

I take the curlers out and the curl defining spray has set my hair into cement hard curls. I can't get a brush through them. My hair is so hard that it feels like if I scrunch it it will just break off. And that is pretty much what happens when I try to comb it out. By the time I am finished the extremely painful procedure, I have a head full of curls alright, but the sink is full of bits of my hair that has broken off. That spray is going back to the store.

I have a Toyota Corolla to drive for this show. The car rental place was out of compact cars so I got this one for the same rate. I am happy about it until I get behind the wheel. I have long legs so always have to put the seat back as far as it can go. And whenever I get into a car for the first time after someone else has driven it, I can barely squeeze my legs under the steering wheel. This time is no exception. I grab for the bar under the seat, pull up, and push back. The seat doesn't move. I try again. No result. It's as far back as it can go. My knees are hitting the steering wheel. I check that and it's up as far as it can go. I can't drive this. I am about to get out and tell them when I think to put the seat back in more of a reclining position. I push it back two clicks and that helps. But honestly, the tiny compact I drove on the island didn't have this problem. There is just no room in this seat. It's a bad design, that's for sure.

One thing I do like about this car is it has an auxilary outlet for my iPod. I plug it in, select David Gray, and set off in the dark. It's 6 am. I head over to the new Golden Ears Bridge. It's going to cost me the better part of $10 every day to cross this bridge for the next eight working days but I am excited that I don't have to leave the house an hour earlier to sit and wait in line for the ferry that used to be the only way to get across the river at this point. I am a bit worried about getting off the bridge at the right place in the dark as I haven't crossed it yet and with it being dark out, I won't be able to see any land marks. The bridge itself is gorgeous, even at night. I read that there are huge brass sculptures of eagles flying attached to the bridge here and there. I can't see them in the dark and it will be dark when I drive home as well. But as we progress through this first week, call time will get later each day so I will get to see them by Wednesday. Maybe even tomorrow.

I wasn't sure how the toll would work. In Florida you have to stop and pay unless you have a pass. Here you can get a transponder for the car that will give you a cheaper rate so I figure that there must be a stop with a human in a booth involved to justify the extra cost of not using the transponder. But there isn't a toll booth. I see a bank of lights and camera's high overhead at the far end of the bridge as I drive under it. It takes a photo of my license plate. So what is the extra cost for? There's no saving in manpower. Transponder or photo, it seems to me it would all be the same system for billing.

I needn't have worried about getting off the bridge at the right place, it is well marked. I am still not sure where it will bring me out in relation to where I have to go, but it turns out that it's right at the intersection I need so I just need to keep driving straight ahead. When I get to crew park, it has taken me 20 minutes to get from home to set. This is fantastic. Tomorrow I won't leave so early. This means I can shave 45 minutes to an hour off of my trips to Maple Ridge from now on. More sleep is good. I usually have to scramble to finish up my paperwork when I get home in order to get 6 hours. I am still not thrilled about the $10 a day but I have to admit, it's worth it. 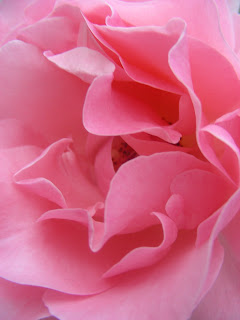 We are shooting at a little house sitting on about an acre. This story is about a garden. The garden is almost another character in the script. As I walk through the gates into the front yard, the greens department has done a wonderful job. It's so beautiful. There is a raised bed surrounded by river rock just to the left of the gate that is a riot of color. The plantings are gorgeous. I find out later that all the plants are sunk into the dirt still in their pots so that they can be lifted out and moved around if needed. Also, part way into the story, the garden will turn from a summer one to a fall one. So then most of these flowers will be lifted out and replaced with mums, cabbage plants, grasses and other fall blooming plants.

The same has been done to the front of the house on both sides of the path, and again to the far right under the cedar hedge. It's a glorious garden and I wish it was mine. I miss gardening. I used to love it and had a big English country garden in my back yard at one time. But since getting into the film business, I have had no time for it. I walk around and take lots of photos. We might need them later for continuity. I also take some beauty shots of the roses close up. I can't resist.

There are a few people I know working on this show. Blaine, the gaffer and his wife, Jen; the set dec guy, Rob; one of the hair girls, Honey Dawn; the sound guy, Shawn; and his boom operator, Blair who I just did the show on the island with. I have met the PM before but haven't worked with her. I know most of the camera crew - Craig, or Tilley as he is called, I love to work with, and the DP, Kim, is someone whom I consider a friend. So I am pretty happy to be here and see people I haven't seen for a year and some two years. 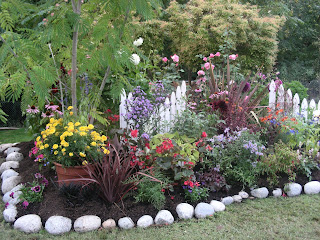 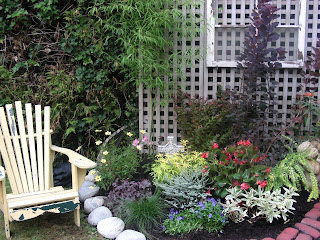 Posted by Sandy Montgomery at 8:09 AM 2 comments: