Today, right now, a year ago, I was in the air on my way to the BVI with a new smile and a sore mouth. 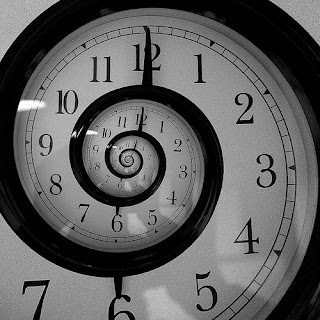 This has been one of the longest years I can ever recall. It seems so long ago that I was in hot and arid Arizona. Forever since I took a long walk on the beach from Neptune's Treasure to Cow Wreck Beach and Hidden Treasure. Ages since my daughter told me she was pregnant.

It's been quite the year. My son got engaged. My daughter had a baby - thus I became a grandparent!! I moved away from the town I had lived in for 28 years to a brand new town clear across the other side of the map of the lower mainland. I had the time of my life for a month in the BVI and for another month shooting Flicka 3 in Kelowna. I made some new friends in the business and in the BVI. As a fledgeling travel writer, I sold my first piece to an online magazine. I FINALLY went to a Coldplay concert!!!!!

All in all, it's been a fantastic year and I am so blessed and grateful for it all. Tomorrow I turn 54, rushing towards the dreaded 60. But a year that takes as long to live, and is as full, as this one was seems to slow that ominous clock's ticking quite significantly. Here's hoping the remaining years of my 50's go as slowly. Let's hope all of my remaining years do!

I came across this video a couple of weeks ago and it absolutely took my breath away. It captures the vibe of the BVI, on video, in a way I haven't seen to this point. It actually caused me to tear up. Well done Benjamin Williams!!! He works for GoPro Camera and I'd say they are lucky to have him as his photography and editing skills are top notch!

You can find his media FaceBook page HERE.
Posted by Sandy Montgomery at 6:11 PM 2 comments:

Easter is a big event in the lives of Christians world over. It's the defining moment of everything we hold to be true. In the islands, it has been said that half of the population is Rasta and loves 'gange' and the other half is Christian and loves Jesus.

Just going to church in the BVI is an event in itself. The little girls are in their best dresses with their hair up in braids and bows, their mothers likewise wear their finest dresses often accompanied with a large hat and always with stockings (in that heat!!). The boys are in pressed pants and shirts and the men the same or even suit and a tie. At Easter they take even more care with their appearance and the girls and women usually wear spotless white dresses. Most islanders will spend the better part of Good Friday in church. 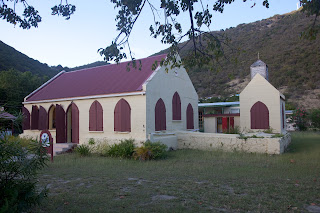 The Church on Jost Van Dyke 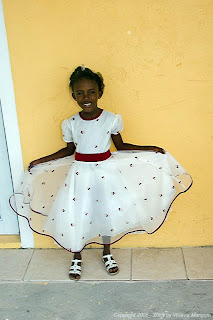 Dressed in her best dress.
Photo by Walker Mangum
Virgin Gorda holds an annual Easter festival. It is much smaller than the festivals or carnivals held on Tortola and St.Thomas but it's still a lot of fun. It commences on Saturday morning with a speech from the Minister of Culture, who usually encourages the crowd not to forget the true meaning of Easter throughout the revelries, and then the festival is officially opened by the current Miss Virgin Gorda. From then on there is nightly entertainment in the village schoolyard, calypso competitions, a food fair, beauty pageants, and J'ouvert - an early morning street party with thumping music and energetic dancing. The festivities culminate with a parade through the streets of Spanish Town on Easter Monday where groups of islanders are decked out in the most elaborate and colourful costumes. At no other time than a festival do you get the full impact of the Caribbean culture and pride in who they are. The parade ends at the festival village with lots of great music, carnival rides, food, and fun to be had well into the night. 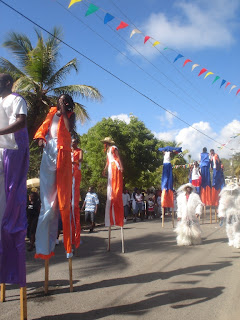 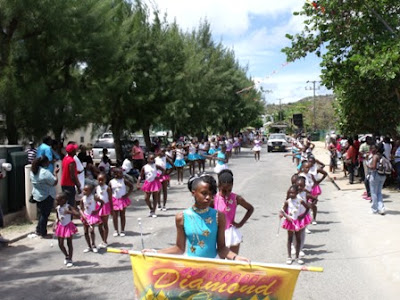 Fischer's Cove Beach Hotel, where I stayed with my daughter in '09, holds a fishing tournament during the weekend. The weigh-in is a fun party atmosphere, with music and plenty of 'the one that got away' stories.

It really is a fabulous experience and not to be missed if you are in the islands over Easter weekend.

A word of warning: there's an old Caribbean legend that says if you step into the ocean on Good Friday, you will turn into a fish! Despite the revelry that proceeds Easter Sunday, it is frowned upon to work on your tan on the day of the crucifixion. Perhaps the legend was started by parents trying to keep their kids off of the beach for one day.

The Virgin Gorda Easter Festival normally gets going during the week before Easter. Call the BVI Tourist Board office at the Yacht Harbour (284-495-5181) for a schedule and more information.
Posted by Sandy Montgomery at 2:40 PM No comments: 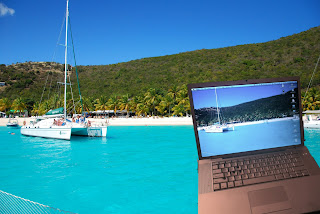 I couldn't explain it, but the evening of the day I wrote the post about Rick Moore, I was struck with a very strong feeling that I was one step closer to my dream of spending a lot more of my year in the Caribbean. There was nothing specific I could point to and say "this is why", but nevertheless it felt like something had broken open for me in a spiritual way. What came to mind was a visual I had when reading the book Thornbirds. In the story there is a sheep farm that has a long private dirt drive leading to the house from the road, and along the drive there are 12 big gates that have to be opened and closed as you get to them and through them. So one had to stop the jeep, get out, open the gate, drive through, get out, close it, and continue on - repeating the process a dozen times. I felt like I had just opened and gone through the first gate of that road.

The next morning I had two offers for writing in my email, as a direct result of that post. One was for a new online magazine about the BVI and one was from Rick himself who has a doctor friend who read the post and wanted an expanded version to go into two medical journals.

I am still waiting for more information about the journals but a few days ago I wrote my first paid-for travel related article. I am thrilled, to say the least, and am hoping it will lead to more opportunities to write about the places I love so much.

The article won't be available to the public to read for a few weeks yet. As soon as it is I will post a link to it. But until then, here is a taste to pique your interest.

When my daughter told me that she and her fiancé were planning to get married in the
British Virgin Islands, I will admit I was hesitant. It seemed like a daunting task to plan a
destination wedding in a location which no one we knew personally had ever visited.
Not only that, we didn’t know anyone who had even planned a destination wedding thus
we had no one to go to for advice. To complicate matters, my daughter was still living in
London and I was in Vancouver right up until a month before the date. But as she was
from Vancouver, Canada and he was from London, England, their choice of a middle
ground, as it were, seemed ideal.

After 6 months of emails, phone calls, tears, excitement, frustration, and at times feeling
like a blind person working in a dark room - the time to pack our bags and head to the
Caribbean was upon us. We had done all that we could and the rest was up to the
wedding planner we had hired, the resort’s event planner, and fate.

It was the most beautiful and perfect wedding I have ever attended.

There were one or two things we had tried to have happen that never did, there was lost
luggage, and there was a struggle with the wedding planner for where exactly the
ceremony would take place but, in the end, the location trumped everything. So if you
are looking for a spectacular setting for your special day, and you don’t mind a little
effort to get there, then nowhere on earth could be more beautiful for a wedding than
the BVI.

If you are considering a BVI wedding, here are a few things that might help you from our
experience:

I can't wait until you can read the rest. And I hope there will be many more articles to come!
Posted by Sandy Montgomery at 3:46 PM 6 comments: