Watch the video below:

Yep... I WON THAT!!! Yes I did!! That is why I am going to Grenada in October. Once I won and we got to talking, Rick, the captain of Sophisticated Lady, extended the prize from 7 days to 10! To say I am excited seriously understates my feelings about this.

First of all, I did not expect to win at all because I abandoned the whole thing half way through. I know my friends on FaceBook and I know human nature. If those videos weren't going up at approximately the same time every day, friends were not going to be sharing them every day. Rick was very hit and miss about getting them up first thing in the morning and eventually at getting them up at all (several days went by with no video - turns out he was at sea with no wifi) and so I decided to stop posting them.

Next thing I hear from Rick is after the contest closed, in a private FB message saying "Why did you stop on day 20? Do you realize you were winning?" My heart sank a little. Then he told me that the person who 'won' did so with questionable tactics so he was having a 'sudden death' posting for three days and that could get me back in front as I was only eleven shares behind first place. So I got back in it and shared the video a couple of times a day for the three days over the weekend, and bugged the life out of my FB friends to share it, which some of them did.

Monday morning I woke up about 8am PST and when I checked my FB page, not even thinking about the contest, another BVI friend had posted on my page that I "better get your (butt) out of bed and start looking for flights to Grenada... what a way to start a Monday morning". My head was still thick with sleep and the exact meaning of the post was not sinking in. Then I went to Rick's page at Ambient Real Life Video and saw a post stating that I was the winner of the contest. 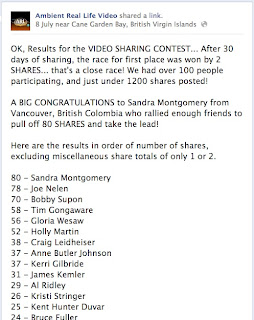 I was elated... a dream come true!! Several in fact... sail some of the Caribbean Islands, see Grenada, go to the Tobago Keys, meet Rick. And instantly worried; could I afford to do this? Yes, the cost of the cabin on the boat was totally free, but I still had to fly there and back and have some spending money, help provision the boat, etc. I have had even less work this year than last, but I have been saving faithfully - setting aside in a special savings account the dollar amount of the number of the week of the year as it rolls around (so $1 first week, $2 the second...all the way up to $52, saving about $1,300 by the end of the year) AND every cent of 'holiday pay' on each paycheque. I realized I had enough saved for the flight with about $200 left over. So that was good as Rick said provisioning the boat would run only about $100 each. But, if you know me at all, then you know that I am not travelling all that way and only staying 10 days. So I knew I'd want to have a land-based week or, better yet, two as well. That could be a problem. I also hate to travel with the bare minimum amount of dollars on me... that is just way too stressful. So I need to do this and I need to do it right.

With no work on the horizon, and almost two months since my last job, I had no idea how I was going to make this happen. Then I got a call from a colleague who, four days into a shoot, had to leave the show and wanted me to take over. That was two weeks work. Then, almost as soon as that show wrapped, I got a call from a show to take over for a colleague who had a family emergency - on a show that had not gone to camera yet. THEN I got a call from a producer whose show I did three years ago, and he was in town to prep a new show and wanted me on it. So that gives me work right up to a month before the trip.

Now all I need is one more show in that month and I am good to go. It's not about the money for the trip now, it's about having enough set aside to keep paying the bills when I get back. A show in that last month would be just the ticket.

I am very optimistic that it will happen. Optimistic enough that I just booked my flight for 20 days in the Caribbean!!
Posted by Sandy Montgomery at 9:00 AM No comments: