Now all of my American readers, and the European ones, can see the show I have been working on for the past year.

Posted by Sandy Montgomery at 10:04 PM No comments:

So after looking at a few motorhomes I have come to the sad realization that the ones big enough for me to live in comfortably and have enough storage for things I must have (I have quite a bit of equipment for work) are too big for me to feel okay driving. And the ones I think I would be ok driving are just way too small inside. I still would love to live in a motorhome for a while, even if just to have the adventure and experience, but I don't think it will work.

I also found out that I need to be in Vancouver at 7am on Tuesday morning to catch the shuttle for crew up to Kelowna. Even though they pass right by here on the freeway, not 5 minutes from where I am, they won't pull off the freeway to pick me up. I had planned to get a cab to the gas station that is right at the end of the off ramp and explained that. But instead, I have to make my way through rush-hour traffic, leaving the house an hour and a half before I have to be there to make sure I'm not late, just so I can ride back on the shuttle the way I just came. It's stupid. And I have no way to get there other than ask a friend to drive me (which I would NEVER expect anyone to do for me) or take a cab for at least $150. Like I said...stupid.

I was feeling very uneasy about not having a car. I haven't ever been without one and I don't want to be in Kelowna and not be able to go anywhere on my days off, nor having to rely on the transport department to get to and from set. I like my independence. So I went back on CraigsList to see what I could find. I found a really nice '03 Toyota Echo - I test drove one back in 2003 and I loved the way the seats felt more like I was in a mini van than a car. But the price was about $600 more than I wanted to pay. I wrote and made an offer but it had already sold for full price.

The next day I went back on CraigsList and the second ad, up for less than an hour, was for a 1991 VW Jetta. Too old. EXCEPT that it had a long list of everything that had been done to it. Rebuilt motor, new alternator, new oxygen sensor, new timing belt, new engine coolant temp sensor, new battery, new oil and filter, recent brakes, new front tires, good back tires, all wheel bearings and axles checked over and in good condition, no rust, perfect glass, no vibrations, steers straight, no oil leaks. The photo showed a car that looked brand new - not a thing wrong with it. All for $2,150. My son, a 2007 Jetta owner, believes German cars are the ONLY cars worth spending money on and had encouraged me to find a good used one when I was thinking of replacing the Jeep earlier this year. And two drivers at this house drive older Jettas and find them very reliable. 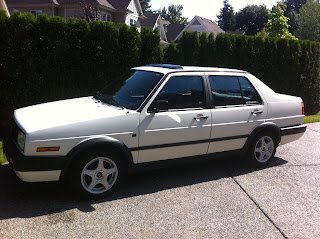 I phoned the number and told the guy I would be out to see it in three hours (I was in Vancouver and had to fight rush-hour back and it was another 45 minutes down the freeway from my exit). I went, and spent two hours there - him going over all he had done to it and me taking it for a test drive. I told him I would take it. I left a deposit and arranged to have him drive it to me on Friday when I would pay the balance, insure it, and drive him back home.

Friday came and we did just that. When I got to his place, I parked it on the driveway and turned the engine off. I waited outside in the sunshine while he went to get a receipt for the payment and photocopy all of the invoices for the parts he put in the car. When that was done, we said our farewells and I got in the car and turned the key. Nothing. Tried again. NADA. To say I was upset would be slightly understating the matter. With all I have been through in the past few weeks, this was the last straw. I just handed over $2,000 for a car that won't start. If it wasn't for being in the presence of an almost total stranger, I would have had a complete meltdown. He was stunned that the car wouldn't start. He seemed not to know what was going on. He opened the hood and looked inside and said that maybe it was too hot. He pulled out a hose and sprayed water under there and I started to freak out that he was going to crack the engine block. But he assured me he was only spraying the muffler pipe or something - I can't recall but he said it was fine. He then got his jack and some tools and I went to go sit on the porch in a wicker chair out of the sun and out of his way. He went under the car to see if the starter motor was the issue but he later told me that was fine. After some searching and doing this and that it turned out to be a plug that took power from the battery to wires that went to the starter motor - it had fried. He replaced it and the car started up fine. But my confidence in the car being good was shot. He reassured me that it would be good now but I was visibly shaken. He said that I worried too much.

If it had to happen, I am glad it happened in his driveway and not after I drove away and went to the gas station two miles down the road to fill it up before I went on the freeway. Or when I go to start it next week to leave for Kelowna. Or if I decide to stop on the long lonely road to Kelowna for a break. But geeze. I really didn't need that added stress.

I am starting to feel much better about this car. 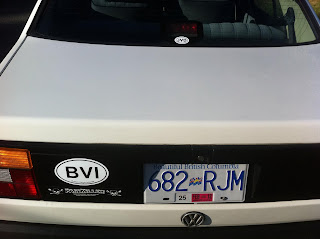 NOW this car is MINE!
Posted by Sandy Montgomery at 10:32 PM No comments: