I have found a fabulous suite in New Westminster. It's not the one pictured in yesterday's post - that place was really tiny. Those photos were nothing short of miracle photography, making the rooms look at least twice the size they actually are.

No, the place I found was the second place I mentioned. The woman who owns it called me the evening before I was to head over to New West and I scheduled a time to view it right before I went to the other one.

The house is AMAZING. It is a genuine New Westminster heritage home, one of the larger beauties. When I was ushered into the main floor, where the owner lives, the grandeur of the dark wood-paneled entrance hall with high coffered ceilings took my breath away.

The house is divided into four additional suites, one in the basement, two on the third floor, and one in the attics. The suite available that I was shown was on the second floor. The door into the suite opened to reveal a roomy, sunny living room with a large bay window on one end. An antique brass chandelier hung from the center of a 12 foot ceiling and underfoot (throughout the whole suite) was the original wood flooring. This, at one time, was one of the bedrooms in the home. The suite ran the depth of the house and through a doorway was a small kitchen on the left and a place for table and chairs on the right. Continuing through, past a small open storage closet, was the bedroom - about half the size of the living room. Each room had a door that lead into the common hall where, down at the end, was the bathroom. That's right, there's no bathroom in my suite but the one down the hall is mine (as the other suite on that floor contains a private bathroom). There is also a bedroom on the floor that the owner reserves for her daughter when she visits from New York, and for when missionaries that her church supports come back for a visit. At those times, the bathroom is shared with whoever occupies the spare room. I was concerned about this at first and it was almost a deal breaker for me. But when I asked further, she divulged that she only has female visitors stay in the room and not all that frequently. The commode is in a separate room from the bath and shower. I decided that I could deal with it. The price is right and the rooms perfectly suit my taste in decor and furnishings - Shabby Chic.

I told the owner that I would take it but she wanted to hold it for me for 10 days until I am sure. She is a bit nervous that I only saw two places. But I don't need to see more. I love this suite! I sent her my references today. 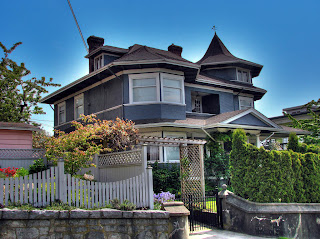 The James Gilley House. The suite is the bay window on the left (second floor); the two windows on the side are in the kitchen and bedroom, in that order.
Here is some history on the original owner of the house:

For many years connected with the firm of Gilley Brothers of New Westminster, James Rogers Gilley occupied an important position in the commercial life of his community, being highly regarded by all who knew him for his straightforward business methods and his honorable dealings. His death, in August 1906, removed from the city's activities one of its foremost citizens and a man who even in a short span of life had done much to promote the
general welfare.

James R. Gilley was born in St. Andrews, New Brunswick, June 12, 1863, a son of Walter and Sarah (Rogers) Gilley. There he was reared and educated but in 1886, when twenty-three years of age, came to British Columbia to join his brothers, Walter R. and H. Gilley, who had located here a few years previously. After his arrival here he engaged in the teaming and livery business in company with his brother Walter at Port Haney for a year. In 1887 they removed to New Westminster, establishing themselves in the same line, and here the three brothers were associated in business for about five years, at the end of which period the livery stable was disposed of, all their attention being given to their teaming. Gradually the present extensive business of Gilley Brothers developed and new lines were taken up, including handling of building materials, coal, crushed rock and sewer pipe, they also becoming in time owners of extensive quarries. The firm gradually built up a business which was second to few, if any, in their line in the province.

In 1890 James R. Gilley returned to New Brunswick for his bride and on the 2nd of October of that year was united in marriage to Miss Sarah Adelma Dean, a daughter of Rufus P. and Mary (Smith) Dean, of St. David, New Brunswick. Mr. and Mrs. Gilley became the parents of eight children: Reita Sarah; Edgar Roland and James Royden - twins; Rufus Walter; Marjorie Evelyn; Beatrice Adelma; Verna Muriel; and Jean Rogers Dean.

Mr. Gilley always took an active interest in fraternal affairs and was a well known member of Union Lodge, No. 9, A. F. & A. M. Beside his connection with the firm of Gilley Brothers he was interested in other commercial enterprises, having made judicious investments as prosperity came to him. He stood ever ready to give his support to any worthy movement that he considered would benefit his adopted city and gave an example of public-spirited citizenship well worthy of emulation. Strictly temperate in his habits, he was upright and honorable in all his dealings and although entitled to prominence and recognition, was modest and unassuming in his demeanor. Frank, open-hearted and genial, he was easily approachable and personally popular, his generous nature making him a favorite among all who knew him. He was always willing to give his share of time and money to any measure that had for its object the good of the community, never taking into consideration if such measures would benefit him financially or not. Naturally his death therefore was a heavy loss to the city of New Westminster, where he died August 1906, the news of his demise bringing sorrow to many a home. Mrs. Gilley, who survives, makes her home in the beautiful residence which he erected on Eighth street shortly prior to his death. She is a woman of many charming qualities and is rarely accomplished and is socially popular among the best people of New Westminster.
Posted by Sandy Montgomery at 8:30 PM No comments: