SO MANY BOOKS, SO LITTLE SPACE 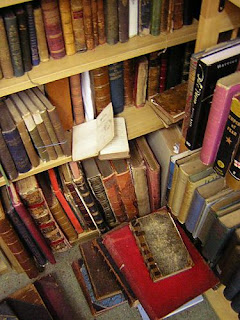 Photo by Ashleigh Montgomery
Deciding what to keep and what to get rid of is easier than I thought it would be. Until I got to the books.

I rarely use my library card. I love books. I love them so much that I would prefer that they became treasured possessions than an item borrowed and returned as if they had no value to me.

This may be explained by the fact that I have been reading since I was three. My mother taught me. I have foggy memories of a green chalkboard on an easel in our living room and yellow chalked letters with my mother's voice sounding them out; ah, buh, ku, du, eh... I remember begging my mom to be able to go to school at four years old. She talked to the school officials and I found myself happily in the British equivalent of Kindergarten a year early (until it came time to do math; there was no happiness in that for me. Ever.) I had every story book lining the shelves of that classroom read in two months. I have read pretty much everything I can get my hands on since.

When I was married, we turned the family room into a library. Bookshelves lined every wall and were full. He was a reader as well but read different authors than I did. When I left, I took the ones that were mine. The Bronte sisters, Jane Austen, a set of leather bound classics such as The Scarlet Letter, Moby Dick, Don Quixote, The Secret Garden. I had every book by Sharon Kay Penman, Bill Bryson, Rosamunde Pilcher, John Grisham, James Patterson, Anne Rule, Maeve Binchy to name just a few. And they all came with me.

I have moved 6 times in 7 years and carting all of those heavy boxes from place to place became too much so I decided that most had to go. Not to mention I no longer had the luxury of devoting one whole room to their keep. I selected only the ones I knew I would read again. The Bronte sisters, Austen, the leather bound classics, Bill Bryson (hilarious travel writer), and Sharon Kay Penman stayed. As did a few select others. The rest I sold at a garage sale or gave to the local thrift store. I tried to sell some to the used book store but they didn't want most of what I had. I didn't know quite what to make of that.

Along the way, in the past seven years, I have added to the small library I cart around from place to place. As I pack my belongings into boxes, yet again, I pick up a book and run my hands over the cover, recalling the story held within. It's like remembering a recent vacation as the scenes that I love dance through my mind. The thoughts of parting with it is akin to parting with a photo album full of holiday memories. If I don't have the book, how will I remember the story? But I shake my head clear of that thought as the pragmatic side of me forces it's way into focus. The question that needs to be answered is - Will I read it again? If the answer is no, then it has to go into the garage sale box.

I have acquired some books that I cannot part with. Two are veritable tomes, inches thick and weigh a lot. But oh, what satisfying reads they are. The sort of book you just don't want to put down and, as the pages on the right get fewer and fewer, you wish you could slow down your reading enough to make them last longer than you know they will. Panic actually set in as I got down to the last ten pages. I am speaking of Pillars of the Earth by Ken Follett and it's sequel, World Without End. Oh the feeling of elation that came over me not a week after I finished Pillars when I discovered there was a sequel just released. I, who can not bring myself to pay the price for a hardcover when it will be out in paperback at a third of the cost in mere months, handed over thirty odd dollars without a blink. If you haven't read them, don't waste a moment more. You MUST get these books into your hands as soon as you can. You won't regret it.

So those definitely go into the 'keep' box. Along with my Guide to the British Virgin Islands, all the Catherine Cookson books I bought over the summer, and a few books I haven't yet read.

As I tape up the box of books to garage sale, come spring, I am proud of myself. It's not easy for me to give up my books but I have done it a few times now. I can't say I haven't missed some of them because I have. I often recall with fondness the entire shelf of Ms Pilcher's books in their chintz print covers - so very British - and I wonder if I did the right thing to get rid of them. In the grocery line up I will see a book by Anne Rule and pick it up, read the back, and wonder if it was one I used to own and thus have read. And now, when I see a book I want to buy, I hesitate to spend the money if I know that I probably won't be keeping it. I guess it's time to dust off the library card.
Posted by Sandy Montgomery at 11:44 AM No comments: