A WALK INTO 'TOWN'

I need to do a bit of laundry; I have been washing stuff by hand but there's a couple of things that I need to put through a washing machine. They used to have a service here at Neptune's where the girls would wash your stuff for a small fee, like $5 or something, but I ask about it and they don't really do that anymore. The girl I talk to says she will do it though, but now I feel like I am putting her out so I decide to take a walk down the road to where there's a little laundromat.

It's not really into the town, or what is called The Settlement, that is too far to walk. Rather it's down close to where the ferry comes in, and to get there is actually the road side of the walk I take down the beach to get to Anagada Reef and Potters by the Sea - instead of the water side of the properties, it's the road side.

It's a really hot day out and, as soon as I am on the road, I am away from the sea breeze so start to really feel the heat. But it's not far to walk so I should be okay. As I make my way, down the paved road - there are no sidewalks - I see a cow in the distance. Cows roam freely about here, they are not owned by anyone. They seem harmless enough so far but as I get close to this one I don't like the way she stops eating and starts eying me so I cross the road to be at a safer distance. She watches me as I pass and then goes back to munching the bit of grass at the side of the road. 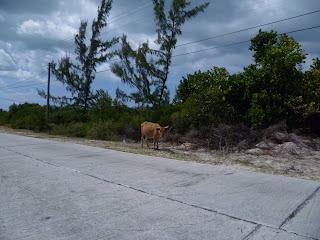 As I get to the crossroads, I have to laugh. There is hardly any paved road here on Anegada. It seems that what happens is, every four years when there is an election, whoever is in government on Tortola sends over some trucks to pave another mile or two of the road to garner votes, then nothing for another four years. Yet here, in the middle of pretty much nowhere, is a roundabout. And not a single car in sight. Not one. And for the whole walk, 20 minutes or so, only one pickup truck passed me and one police SUV. Yet someone, in their infinite wisdom, decided that a huge roundabout was needed at this junction. 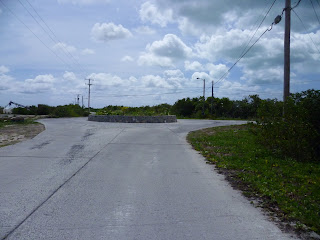 The center of the roundabout has some lovely plants, one of which is a lily you see all over the place here. It has a beautiful bloom that only lasts a day or two. I walk right up to it to take a photo, not something I could do at any other roundabout I have ever seen or driven. 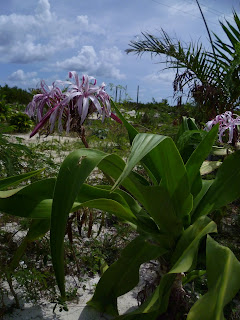 Once I get to where the shops are, and there isn't much in the way of shops - just one short row that houses the laundry mat, a small grocery store, and a restaurant and then two tiny gift shops across the way and one bigger one, The Purple Turtle a bit farther down the way - I head straight to the laundromat. There isn't a dispenser selling those one-use boxes of soap so I go to the grocery store next door. They have a small box of soap that would probably do 10 loads or so, and it's $15.00. There is NO WAY I am paying that so I decide that I will take the laundry back to Neptunes and get that girl to do it for me after all. I will pay her; I'd rather pay her than spend that sum on a bit of soap.

While I am in town I decide to look at the couple of gift shops and am surprised to find that the three of them don't all carry exactly the same items, there's actually a variety of really nice things. Purple Turtle has the nicest stuff and I end up buying a couple of small gifts and a glass Christmas ball for me that is painted locally and has a pink flamingo against a swirl of aqua and blue like the sea, and Anegada written on it. It's really pretty. I hope I can fit it in my luggage. At another store I buy a lovely cotton white blouse to wear over a tank top or bathing suit for when the sun is just a bit too much. It's surprisingly reasonably priced - I had expected it to be twice as much when I checked the price tag.

I decide to stop at Anegada Reef Hotel for a cold drink and as I am walking there, I realize I left my bag of laundry in the change-room when I tried on the blouse. I go right back to the store but it's closed! I see a sign saying that they are closed from noon to 2:00. I decide to have lunch at the hotel instead of just a drink and that will kill the two hours. Except, when I finish lunch, which I dawdle over, I ask the waitress what time it is and she tells me it's 12:15 - I have been here at least an hour, which means that the store closed early. I didn't bring my Kindle with me so I have nothing to do to kill the time. I sit there a while longer and finish my 1 litre bottle of mineral water and then decide to walk back to the store and wait in one of the chairs on the little porch out front. I no sooner sit down and get settled than an SUV pulls up - it's the husband of the owner just driving by after dropping his kid off at school after lunch at home. He saw me there and so stopped to see what I needed; one of the great things about such a small place!! I tell him and he lets me in to get the bag and I thank him profusely. He seems like a really nice person and says he is glad he saw me there.

I head back to Neptune's along the beach and as I climb the steps from the beach to the property I see Nancy and Walker. They arrived about half an hour ago and are talking to Linda, the owner. They have come to take me to Hidden Treasure for their last afternoon before they leave later today. I was over there yesterday, supposedly to help them pack up all their stuff and put it in a closet they lock up - their place gets rented out when they're not there - but I ended up not doing much. Nancy had some printed lists of consumable items and, as she emptied her kitchen cupboards, she had me tick off what they needed to bring next time they come. So today I ask if I can help at all with packing and they tell me it's all done and in the closet! So we spend the afternoon sitting under their palapa, enjoying the breeze and the view one last time before they go home.
Posted by Sandy Montgomery at 5:49 PM No comments: