A DAY IN VANCOUVER 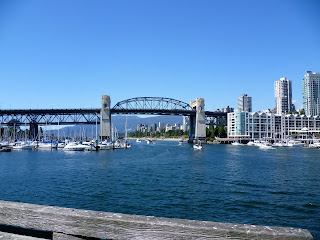 I have booked a job for six weeks! It's a kids show, three weeks on various locations throughout Vancouver and then three weeks in the studio. It's ridiculously low pay but it's a ten hour camera day, because of the kids, and it is six confirmed weeks of pay. I have struggled with taking it because I know that one director has asked for me to work on his show in August, but it just got pushed and I have learned that you can't count on anything these days until the deal memo is signed, especially once they start pushing. Also, Ron's movie is set to start at the end of August, but again - same thing. I could make more money with those two movies, a lot more, but they haven't started pre-production yet so they could get pushed into next year, for all I know. It's happened before. Two movies that were supposed to go any day, all last year, finally got canceled altogether. So I feel I must take this show, despite the long commute, the abysmal pay, and the chance of missing a better paying show.

Not having a car to get me to work, I call my son. He has a VW Jetta that is parked because he bought a jeep wants to sell the car. It's not selling. I offer to pay his car payment and insure it, if I can use it. He agrees so now I have a car to use for a couple of months, at least. YAY! It's so great to be mobile again. I have felt like I have been under house arrest for the past few weeks.

It's a gorgeous Saturday morning, and I head into Vancouver for an 11:00 appointment for my hair doing. I have left getting it done weeks past where I normally would because I just can't really afford it, but with almost two inches of silver roots and way too much length, I can't stand it a day longer. I will use some of the garage sale money. And Isolde, bless her heart, always gives me a very healthy discount.

I leave the house at 10:00 precisely - it should only take half an hour to get there on a Saturday - and before I can get to the Port Mann Bridge, I am crawling along like it's rush-hour Monday. It takes me 45 minutes to get to the other side of the bridge. I figure it must be the construction that is happening for a new bridge and, consequently, all along the freeway for miles. I call and tell the salon that I am going to be late. Then I do the stupidest thing - I take the exit into Coquitlam because I have just heard on the radio that it's an accident near this exit that is tying things up, and as I look ahead - now at a dead stop - I can see the police lights flashing way ahead. I figure I can bop off here and zip down Lougheed Highway and get back on at Brunette. As I turn the cloverleaf onto Lougheed, I see the traffic ahead of me is also stopped dead. This time it's a combination of construction and idiots like me who thought they could bypass the accident. It takes me another 45 minutes to get back on the freeway, watching the traffic on said freeway now zipping by as they have passed the accident. What a nightmare. I am so frustrated by the time I arrive at my appointment, I am vowing NEVER to drive into Vancouver again as long as I live. Except I do have this new show and I do have to come in on Tuesday for a meeting with the producer. GAH!

Isolde, my son's girlfriend and hairstylist extraordinaire, quickly sets about making me look respectable again. I love the cut and color and leave feeling a million times better than I did when I arrived. (Note: I will post a picture when I have styled it myself. I can't seem to get a good photo today.)

I decide that to turn around and drive straight back home when I am here in the city on such a glorious day would make no sense at all, so call my daughter to see if she and her hubby are anywhere nearby that we can get together. She doesn't answer so that probably means they are kayaking on the ocean or careening down a trail on their bikes someplace. I decide to head to Granville Island to buy my first meal of the day, and sit by the water to eat and watch the boats come and go.

The crush of people and the sights and smells of the market-place are almost overpowering. I dodge and weave my way to the ready-to-eat section and, on the way, try to decide what I will order. Indian food or a crepe? I love crepes, but I really want some butter chicken, so the Indian food wins. I take my selection outside and find a table in the shade.

Is there anything better than this? Well, if I am honest, yes - if I was sitting on one of those boats, heading out to the water as I savoured each bite of fragrant rice and curried chicken (washed down with Canada Dry Ginger Ale) as the sounds of the shore faded away to be replaced by the slapping of the water on the hull. As it is, the warmth of the breeze, and the spectacular view of the city, water, and mountains is pretty fabulous.

I have moved to a spot in the sun and closer to the water. I alternate between reading my book for a bit and then watching the boats. I don't move for two hours. I get a call from Ashleigh saying that they are just on their way back from a bike ride and she's cranky because she had to push her bike more than half of it - both ways on a big hill, apparently. Too steep to ride either way, for her comfort level. So they won't be joining me. When I finally decide to get up, I have also decided that I can have my Indian food and eat a crepe too. It's dessert! Bliss!

My blissful state of mind soon evaporates on the way home when I encounter another huge traffic snarl as I, once again, pick a rotten route to my destination. It takes me 20 minutes to go one block. Is there anywhere in this city that isn't under construction?

Sights and tastes of the day: 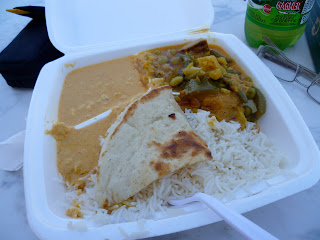 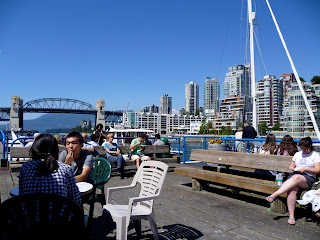 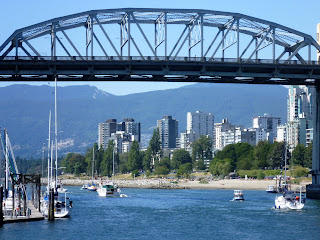 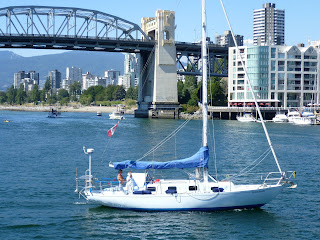 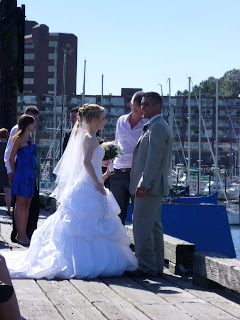 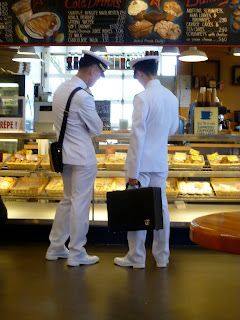 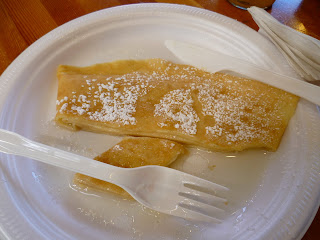 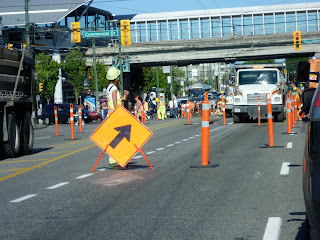 Posted by Sandy Montgomery at 10:27 AM No comments: