I dropped my camera the other day. I have dropped it before but this time it seems to have knocked the lens off of it's track because, when I turn it on, I can feel the gears grinding but nothing happens. Then I get a message on the screen; 'lens error'. Not good. I decide to take it down to London Drugs, where I bought it, right after work to see what it will cost to repair. Two to three hundred dollars. This camera cost me almost five hundred, but I can buy a pretty good one for what it will cost to fix this one so I leave without leaving it with them. Maybe I will open it up myself and see if I can get it back on track. Meanwhile, Ashleigh has given me an older Nikon I gave her a few years ago. She has a new camera and so never uses it. It takes great photos, it's just that the screen is the size of a large postage stamp. I will miss my newer Nikon with it's big screen and 10x optical zoom.

I climb into my van and decide to call Ashleigh to see if she and Rob want to come for dinner. As I am chatting with her, I put the car in reverse and check all around to see if anyone else is backing up. I see reverse lights in the car parked directly behind me and wait for him to back up. After several seconds of waiting, he doesn't move so I start to back up. I get 3/4 of the way out of my spot when he starts backing up. I toot the horn in warning but he keeps coming. So I lean on the horn to no avail; he still backs up. My daughter hears the horn and asks what's going on and I tell her. Somehow he manages to squeeze behind me and get out of the space and then pulls forward down the aisle. I resume backing out and follow him. Suddenly he brakes, gets out of his car, and walks back to me. "Hang on," I say to my daughter, "This guy is out of his car and walking to me." and drop the phone into my lap. I roll down my window. He pushes his face through the window and right up to mine. Barely controlled rage contorts his face and stains it a deep red. "You were jabbering on your cell phone, weren't you?" He barks at me. "Woah. You need to settle down a bit." I say. "You were jabbering on your cell phone, weren't you?" He repeats in exactly the same way as the first time. "That has nothing to do with it." I say, "I was three quarters of the way out of my spot before you started moving." "You were jabbering on that cell phone," he says, yet again, "you need to get your sh*t together lady." And with that he stalks off. I am not done with him. I lean out of my window and yell after him, "YOU backed up into ME." A burly, long haired fellow has turned from his car that he was about to get into, just across from me. He marches up to the angry man and pokes his finger at him. "SHE was out of that spot before you started to move," he shouts, "so don't you go yelling at her." I can see he is pitched to fight this guy if he has to, but the angry man just gets in his car without looking left or right, and drives away. I look over at my hero in shock and he looks back at me. "Thank YOU." I say to him. "No problem." he replies with a smile as he walks back to his car. A woman pushing a shopping cart, who has stopped in her tracks to witness all of this, gives me two thumbs up and a big grin. I smile back at her and then drive away.

I am still behind the guy when we get to a light and he goes to turn left and I go straight through. I am pissed off at him so lean on the horn as I drive by. As I continue along, I am annoyed with myself for not giving him a piece of my mind for being such a jerk. I should have asked him if it makes him feel like a big tough guy to come after women like that. I would have loved to poke the hornets nest just a little. I am wishing I would run into him again when, about ten minutes later, I turn onto the street that leads down to Fort Langley and I realize he is in front of me. I decide to follow him to see where he goes. We pass my turn-off but he turns at the next street. As I follow him he must see me in his rear view mirror because he suddenly floors it. Well I can do that too, and do. We come to a stop sign and he turns right. I turn right, after stopping, and to my surprise he's nowhere in sight. It's like he just vanished. I know that can't be the case, so slow down and check the first driveway on my right and there he is, pulling into his carport. HA! So now I know where you live. I just have to decide what I will do with that information. Nothing probably. But it gives me some satisfaction imagining a couple of options.

Last day at work today, Sunday, and all we have is workforce buses as there are no more sliding events. There's four of us scheduled. I guess that's in case we get some WOP buses but we end up getting none of those either. So I send two crew home and Dan and I take care of the rest. Dan goes home at 9 and I stay till 11 when Jessica offers to do the last bus so I can go home as well. The Impark crew have started to pack up the trailer and it's really starting to sink in that we are done.

When I get home I call my friend, Fran, to see if I can go to her place to watch the hockey game and the closing ceremonies on my nice big flat-screen TV that I loaned her for the games, as there's no cable at my house. I get her voicemail so leave a message. She doesn't call me back and I end up watching it at home alone, streamed on the computer. I thought about going to the local bar to watch it there, but I don't really want to do that alone.

I am excited when Canada wins the gold. What a game!! I even shed a few tears of joy, and I don't even like hockey. But this gold means so much more than just one game; it breaks a record for the most gold medals won by any country ever in the Winter Games. And, because the winner of the games is determined by gold medal count only, that means we won the entire games. Wow!! What an accomplishment! And with or without that win, I honestly feel like these were the best Winter Games ever. I am so proud to be a Canadian.

Monday night we have a 'wrap' party planned at the casino near where we worked. I pick Olga up and when we arrive, hardly anyone is there. Richard, the big boss, is there and it's nice that he made the effort to come. But soon he leaves and says he will be back. I assume he is going to gamble for a bit, but it turns out he has gone to Earls Restaurant nearby because so many of the kids who worked at WOP are underage and can't get into the casino. The idea for the party was mine; early on I suggested we do like after we are done shooting a movie and have a bit of a 'wrap' party. It's not put on by Game Day; we are all paying for our own food and drinks. I don't know who's idea it was for the casino as the venue but it never occurred to me, nor anyone else I guess, that there would be a problem with age. I wish the kids had spoken up so we could have changed it to all meeting at Earls instead.

Only one bus driver shows up for the party. There were supposed to be three or four. He leaves pretty early as he has a run tomorrow. By eight, another bunch have left. I am surprised at people leaving so early. But those of us that stay end up having a pretty good time, and more come and go throughout the evening. Shawn has brought his lovely Asian wife. She is like a tiny China doll. She is six months pregnant with their first child and Shawn keeps putting his hand lovingly on her belly. It's so sweet to see.

Doug, our other boss, shows up after he had been at Earls with the kids for most of their time there. We are just on our way out when we see him at the bar with a big group we didn't realize had come. We were in a room in the back. All in all, it was a nice night and I am glad I went. I give Doug my card so he can visit my website and see what I do in my normal job. He also wants this blog site so he can read about my Olympic experience while he works at his new post in Squamish for the Paralympics. Apparently he has the night shift so will be bored. I am sure he won't be too terribly surprised at my take on working at the WSC transport hub. Now that we're done, everyone seems free to express what barely controlled chaos the entire busing situation was. And, apparently, we had the best-run location with the fewest issues. Boggles the mind. 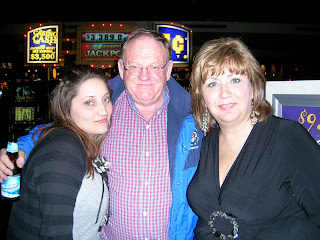 Jessica, Doug, and me.
Posted by Sandy Montgomery at 3:21 PM 2 comments: