A CAR WRECK, A FIRE, AND A MOVIE BACK-LOT Just wrapped on a three week shoot of a TV movie based on a book by famed novelist Sandra Brown. I can't tell you the name of the book/movie and post photos so I'd rather keep the name a secret and let you have a look at what we did.

We had two of the nicest producers I have ever worked with on any show. I would work with them again in a heartbeat and am very happy to say that I will be working with them again in a week.
Sandra came to set for two days and was just lovely. A gorgeous woman with a fabulous southern accent, and very sweet. She was excited to be there and to have a small cameo in the movie. I have to admit that it was a bit distracting for me because every time I heard someone say "Sandra", I looked up from my notes to see who needed me and, nine times out of ten, they weren't talking to me.

We had a couple of other exciting days as well. We rolled a car and we set fire to a building on a movie back-lot. The fire was pure movie magic with fire bars, smoke, and a few gasoline bombs. We had two genuine ladder trucks there and eight or so real firemen joined the background performers. It made for a very fun and exciting last night of shooting.
Now I have one week to prep for the next show - a Christmas movie. Like I said, same lovely producers, same great D.O.P. - my friend Kim, and most of the same crew. I am looking forward to it.

Monday I go for an interview for a 22 part kids series = work until April. PLEASE PICK ME! I will keep you posted. 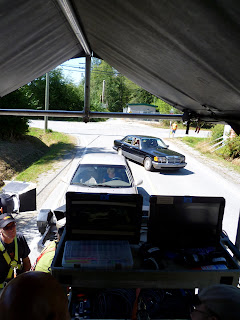 My view from the process trailer as we tow the car with our lead actress, Jaime Pressly inside. The car is on a platform which also has some lighting attached. The camera guys are below the monitors on a lower level of the truck that tows the car. I am seated with the AD, Gaffer and 2nd Camera Assistant on the top level, which is actually the generator that runs everything. Below me is Kim, our D.O.P. on the left and Gary the Director on the right. In the background you can see a Mercedes and this car will come right up to the back of the trailer and, on camera, it will appear as if it is bumping it. It will also swerve beside the car and, again, on camera, it will appear that it is side-swiping the car on the trailer (which will appear to be driving on the road). 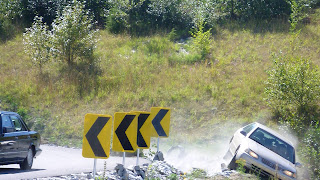 This is now the car being driven off of the road. 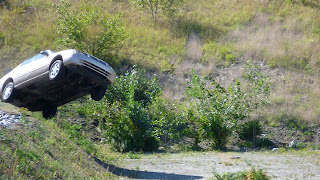 The car is airborne. As you can see, the angle of the car does not match the picture before and that's because it is from a previous take where the car did not roll onto it's roof as planned. It took three attempts to get it to roll. What was amazing is that, apart from it not rolling twice when it should have, it just started right up and was driven back to the top of the hill - after the front tire that blew out on the landing was replaced each time. It's a Toyota Camry. If you have a teen who has just learned how to drive and you want them in something virtually indestructible, go for this car. It won't flip over, even when you try, and it just keeps on running despite the abuse. Amazing. I told the producers that they should send the outtake footage in to Toyota and they could make an advertisement out of it: "A film crew in Canada tried to flip a car for a stunt. It took three attempts...." 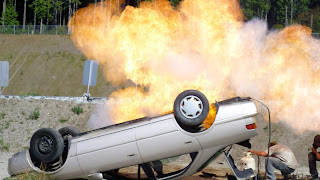 Once the car was upside down, we needed it to burst into flames. This was done by the SPFX (special effects) team. If you click on the photo to enlarge it, you will see two of the team behind the trunk of the vehicle. Brave men! 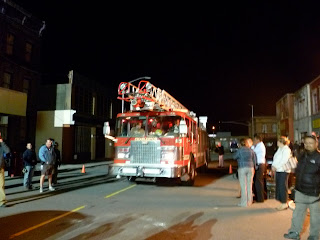 One of our two gorgeous ladder trucks. Boy that siren was LOUD! 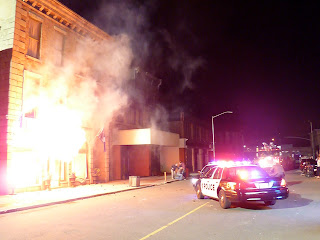 One of two large fireballs created by the SPFX team to blow out the windows of the building, which were made of safety glass. Stuntmen were running in and out of the building while the fireballs went off. You can't see them in this picture because they are already inside. 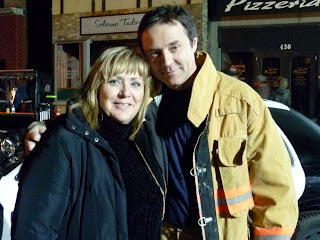 Currie Graham - our wonderful male lead, and me right after he was show-wrapped. I will really miss working with him. He is hysterically funny and kept us all laughing all of the time. I really hope I can work with him again soon. Just an all-around great guy, from what I could tell.

Here's a few shots of the back-lot I took. The entire street is fake-fronts on both sides of the street. I have put up the back of the apartment building and the back of the 'Limelight Nightclub' so you can see what it looks like, behind the scenes, as it were. 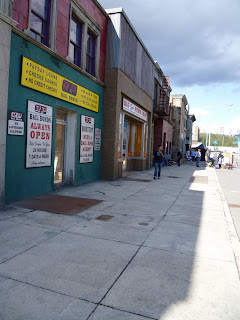 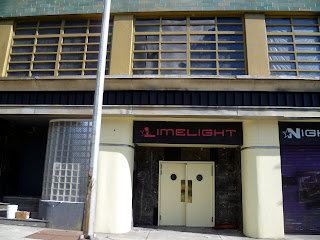 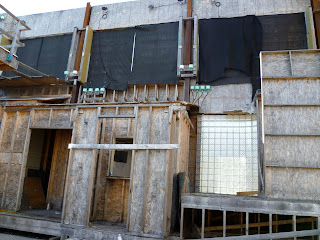 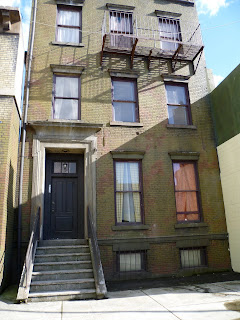 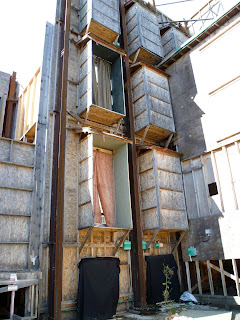 Posted by Sandy Montgomery at 2:20 PM No comments: