Yesterday Michael offered to take me to a different beach today, Morne Rouge. It is just over the hill from the end of Grand Anse but he picks me up at the hotel in the same friend's car as yesterday. There's lots of bread to be delivered in the car and I haven't had breakfast so the aroma is mouth watering.

It is so hot out today. We get to the beach and I walk the length of it looking for sea glass but there isn't even one piece. There are a few really nice small shells, however.

If I want a beach chair here, I will have to pay for it - $10 EC for the day. I decide to go to hotel on the beach, Kalinago Resort, for breakfast.  There's a lovely restaurant/bar right on the beach. There's no one there but one server. I order the potato waffle. I haven't had one of those ever so am intrigued. It comes with a plate of fruit to start. One of them is a guava. I haven't had that before either, and it's not bad. Sort of like a small pear with a lot of hard but edible seeds. When the potato waffle comes, it doesn't taste at all like I imagined, going off the long list of local spices listed on the menu that should be in it; it is rather bland. So I hit it with salt and pepper and ketchup.  Disappointing. 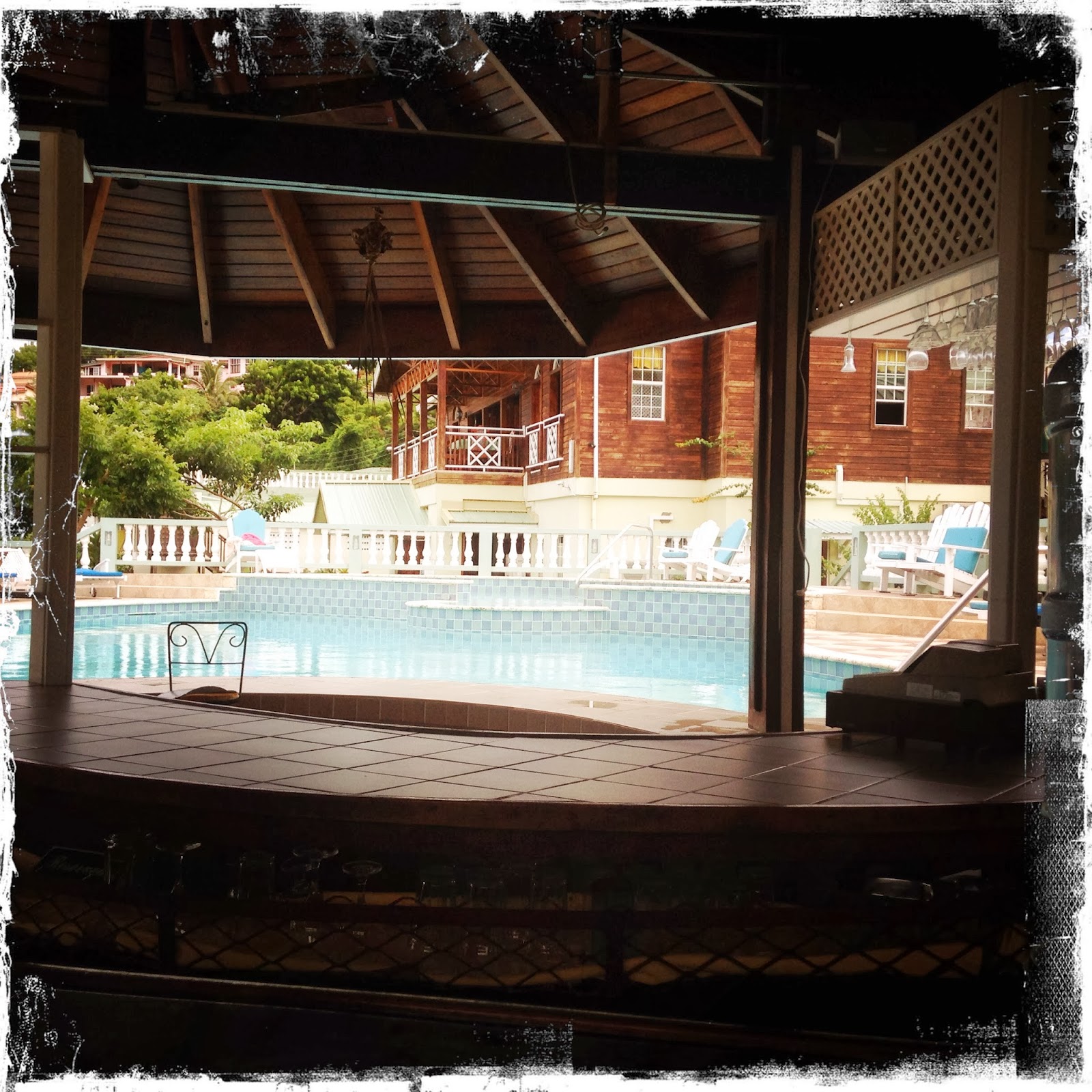 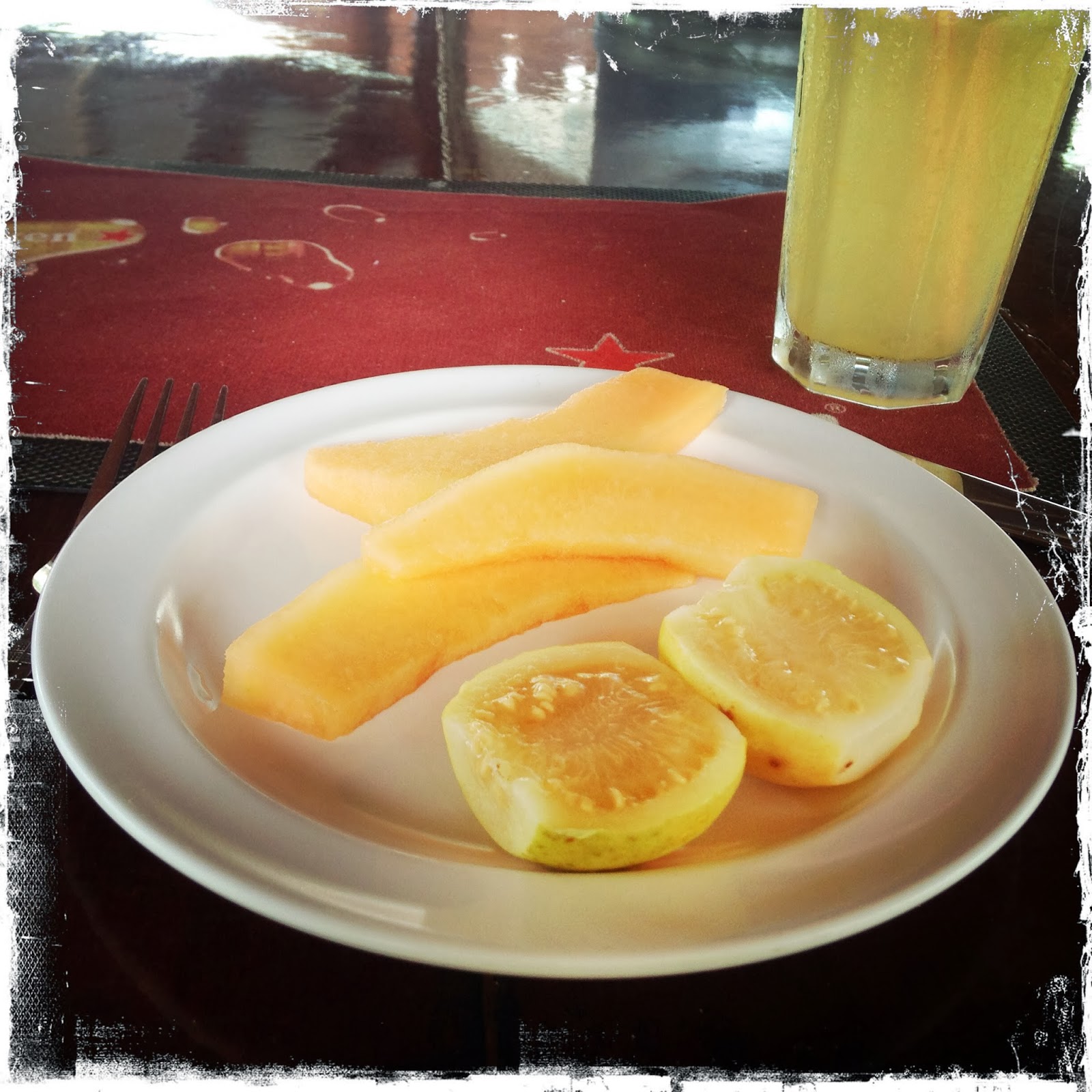 Fruit plate with guava
Mike wants to leave the beach, he was hoping to meet up with some musician friends, he has brought his djembe in hopes of jamming with them, but they don't show up. I am fine with leaving as there's not much here but I know it is going to be a very hot walk back so buy a Ting for the trip.

Ok, I nearly pass out. It is so incredibly hot and there's not much shade along the road. Getting to the beach nearly did me in but the walk on the sand to the Allemanda nearly killed me. SO SO hot and incredibly dificult to walk on the soft sand when this exhausted.  Why I don't stop for a swim - I just don't know really.  I think it is knowing my thighs will chap when wet, having to walk so far and also, I am really so exhausted from the heat, all I want to do is collapse onto a lounge. When we get to the Allemanda, it takes me 20 minutes of sitting in the shade, unable to even speak, to recover. 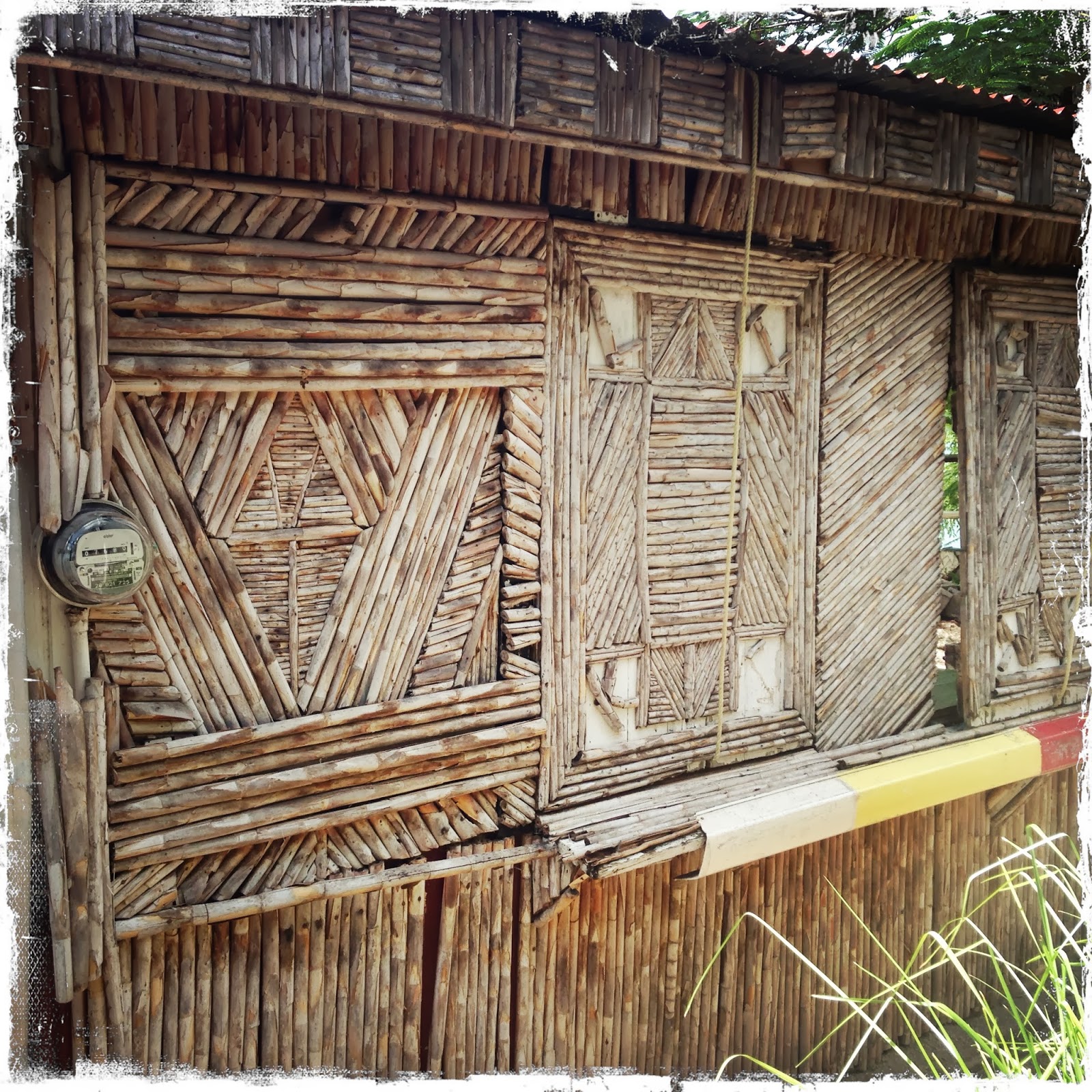 Cool cabin on the way back 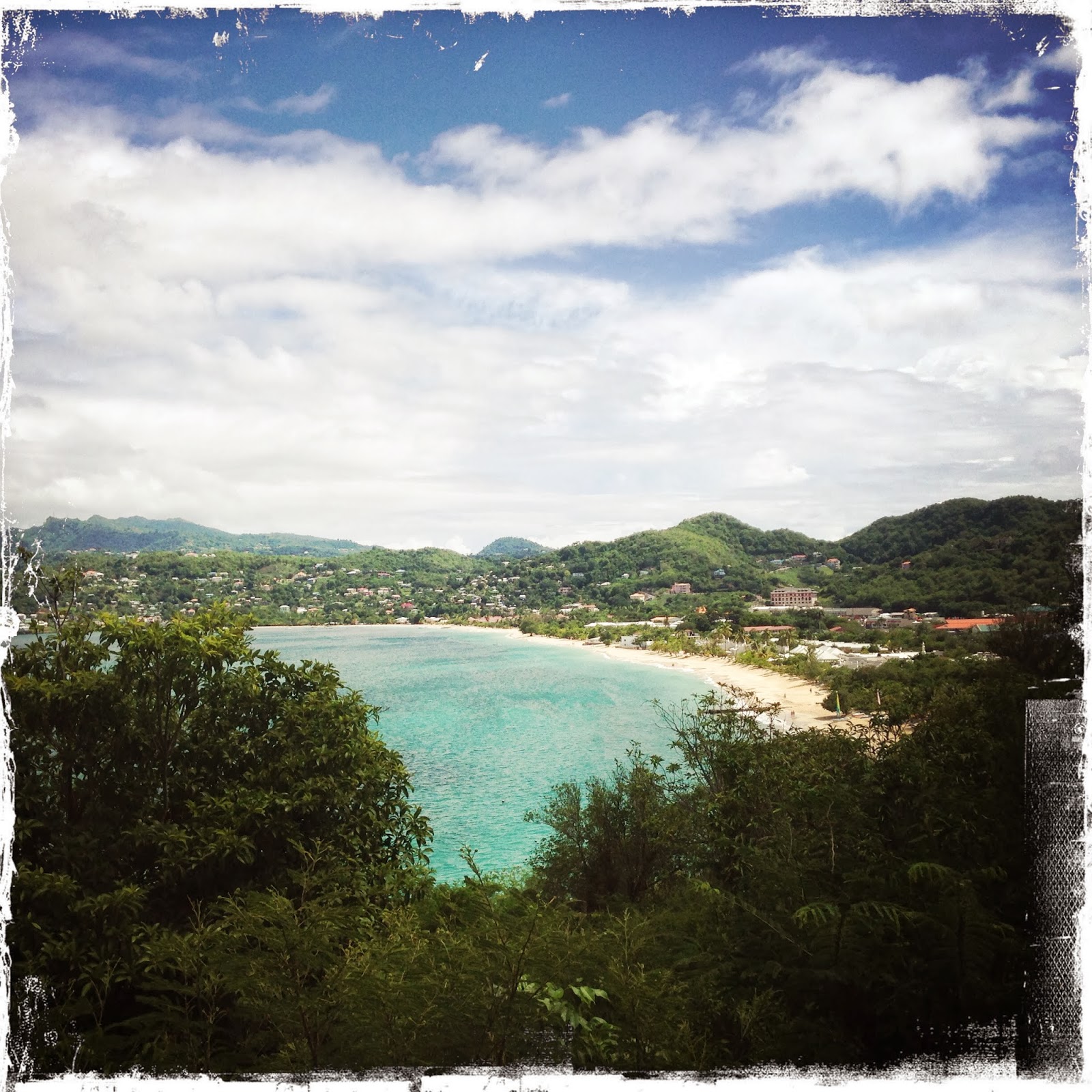 Gorgeous view down to Grand Anse from up here 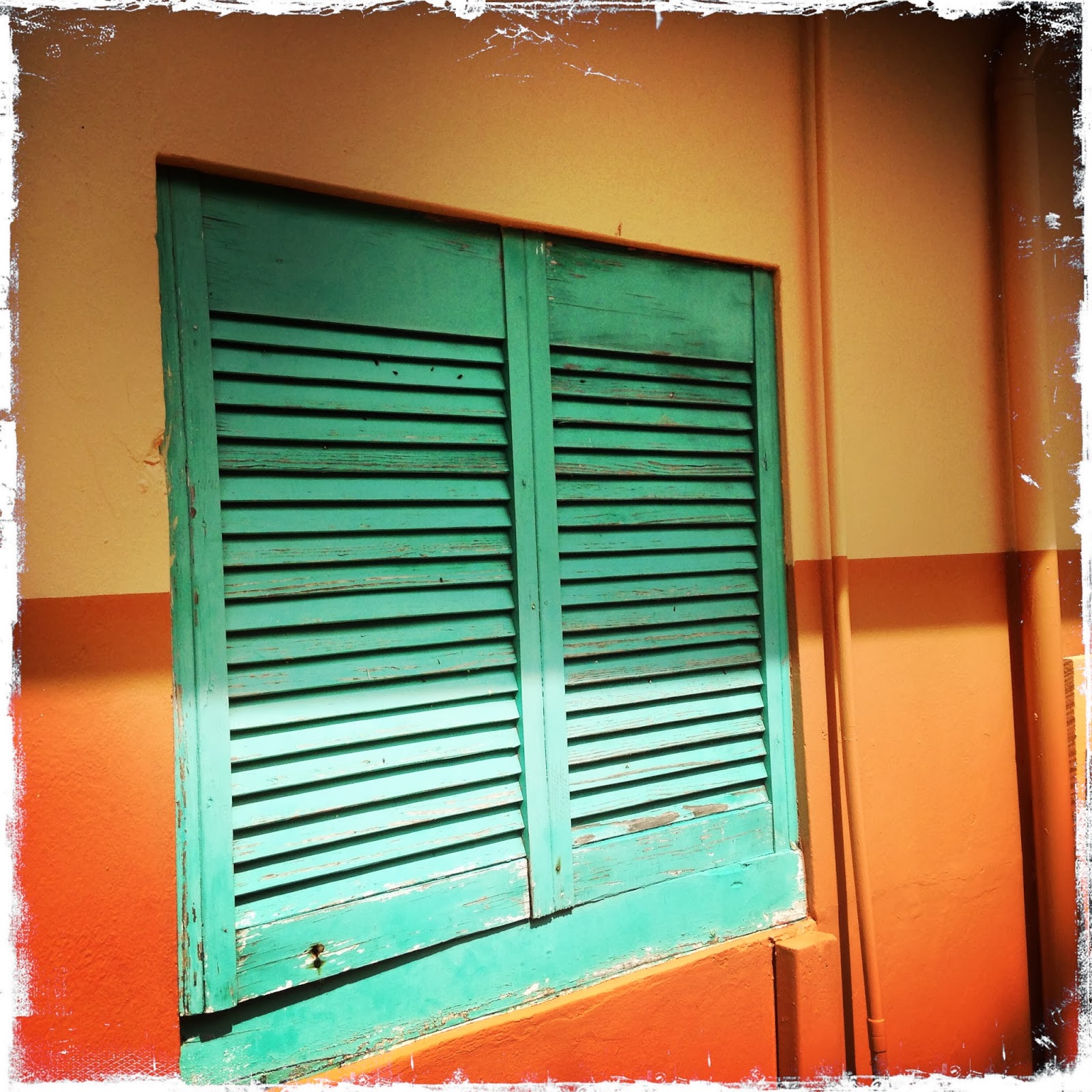 Caribbean colours at The Flamboyant
It suddenly begins to storm, starting with waves coming in on the beach getting bigger and bigger each passing minute until they are much bigger than usual. The rain starts and comes down hard so we take shelter at Ali Baba restaurant at the Allemanda for a drink and I order us some hummus. Mike talks a lot about his friendship and relationship with Rick.

The rain finally stops so we go back to the beach and in for a swim. The water is so incredibly warm!

It starts to look like rain again and, sure enough, starts while we pack up. I decide to stay at the Allemanda in the lobby and read for a bit until it lets up. Mike wants to go so we say goodbye and I, knowing I won't see him again, feel a little sad. 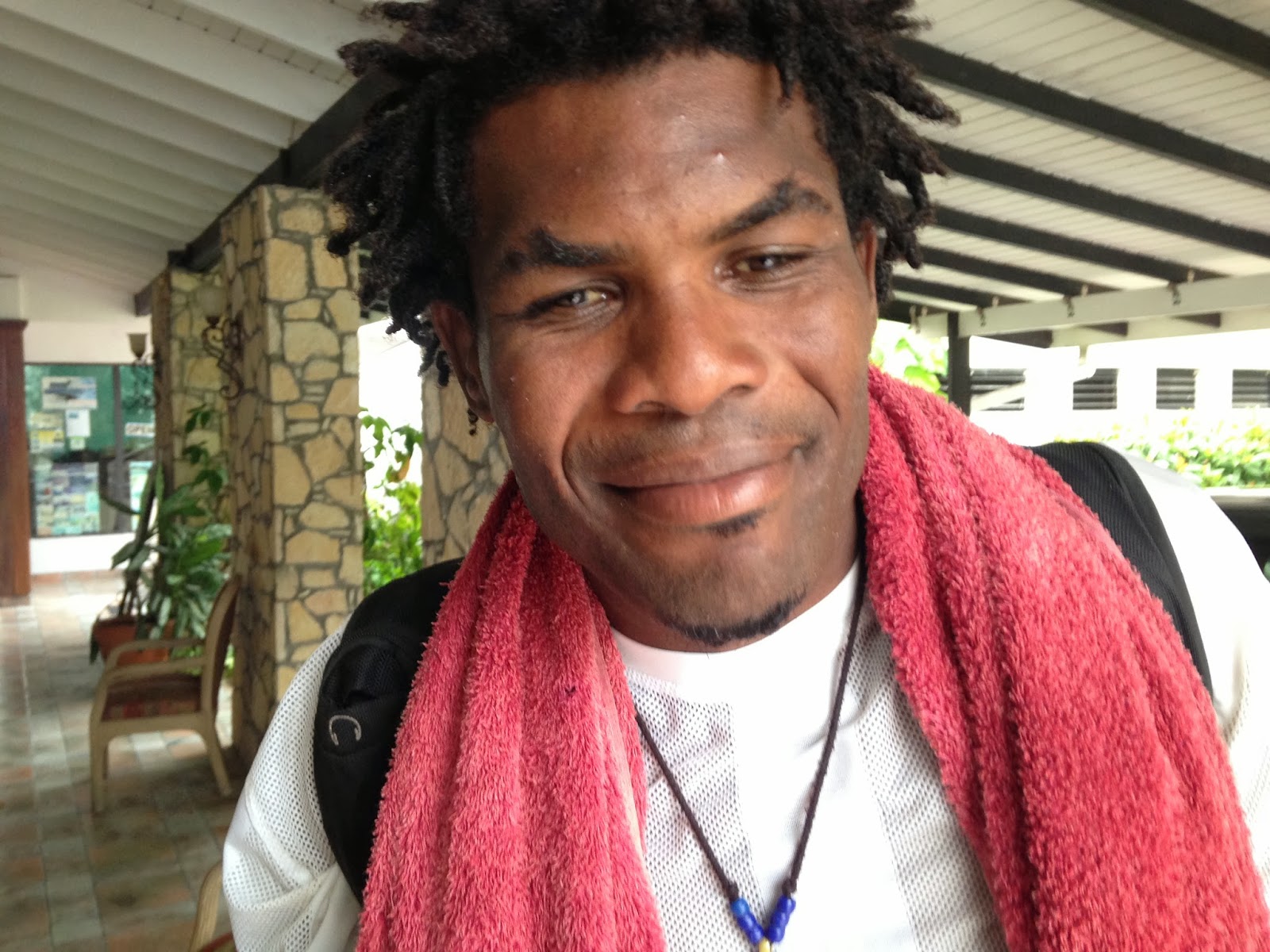 Bye, Mike
After a bit, I walk to my hotel in drizzling rain. Something is going on again at the grounds by the roundabout and this time it is all kids in school uniforms and there is very loud Caribbean music. Really loud. I can even hear it from my hotel room.

I change, freshen up, and walk back to the mall to get some Ting. I've been out of something to drink for two days. There is actually a traffic jam on the road because they've make the beach side a one way while this thing is going on at the grounds.

I buy some bubble wrap to protect some stuff I have bought to take back. Note to self: next trip, PACK SOME!! As if I don't have enough of it at home - sheesh! 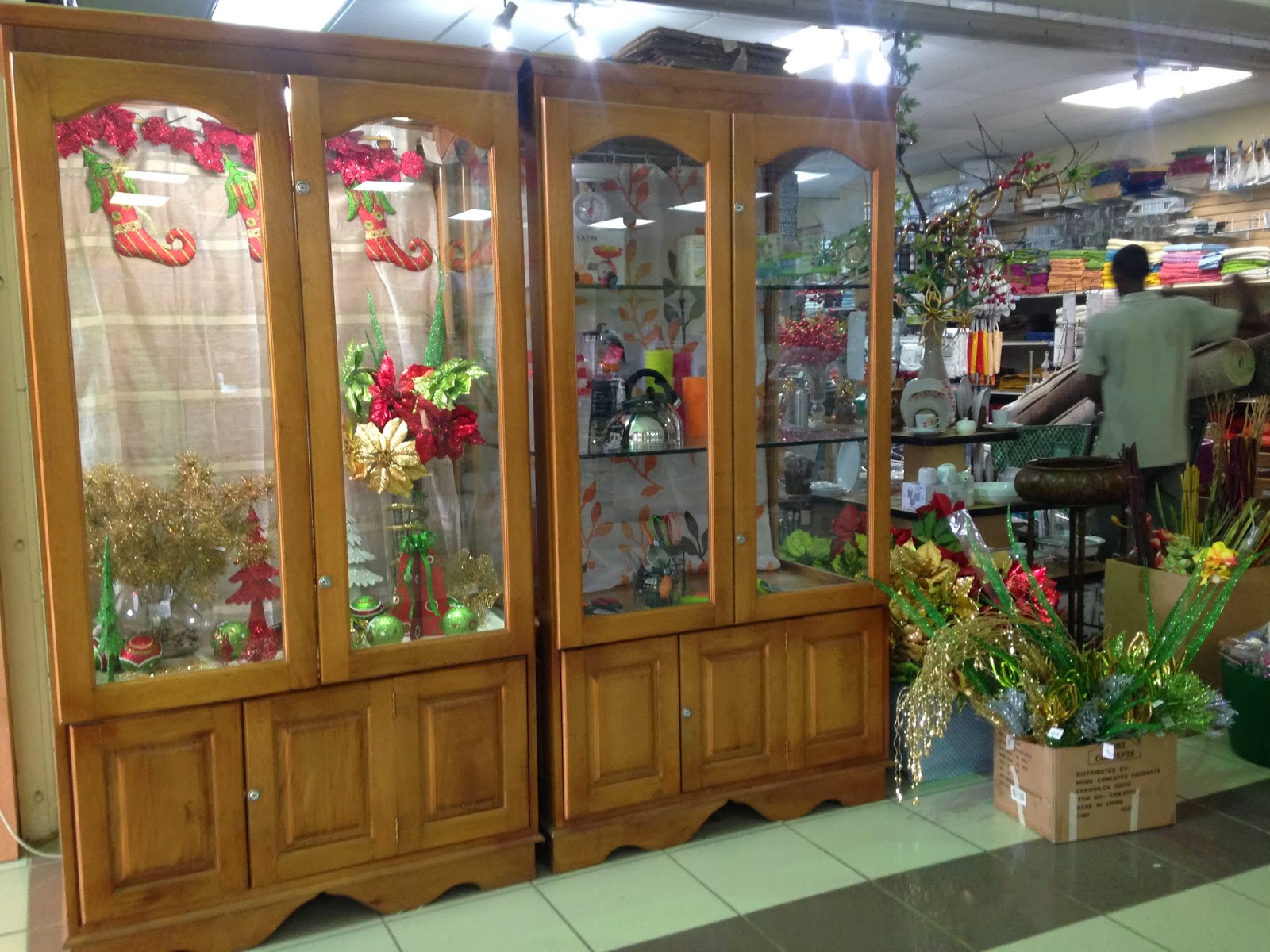 Christmas has, apparently, arrived at the mall
I call Joe, the taxi driver that Mike Sweeney recommended, to take me to Prickly Bay Marina for dinner - I must have pizza there one last time. It takes several tries to connect - I can hear the line is live but he never replies to me. A ride there with him is $70 EC return. Seems steep but it's worth it for the peace of mind as he is so professional.

No one I know is at Prickly but I get talking to a guy beside me at the bar, Joe from Maine originally but now he lives on St.Thomas yet is in Grenada indefinitely on his boat. He is a very young self-made millionaire - bought and sold marinas. I have a nice time chatting with him and watching the boating crowd. A bit more upscale than the Hog Island crowd, but still not my scene.

The sunset is spectacular. 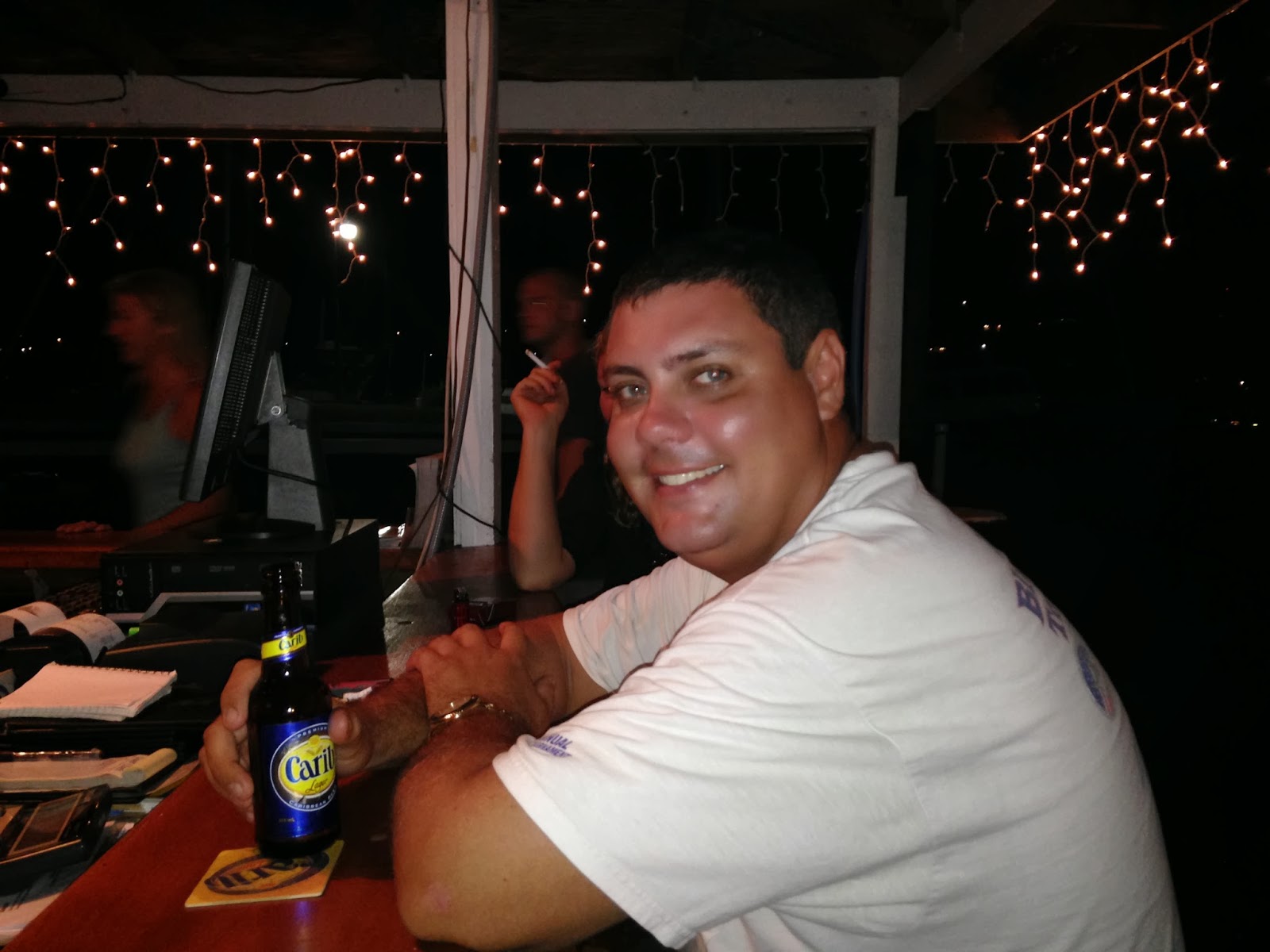 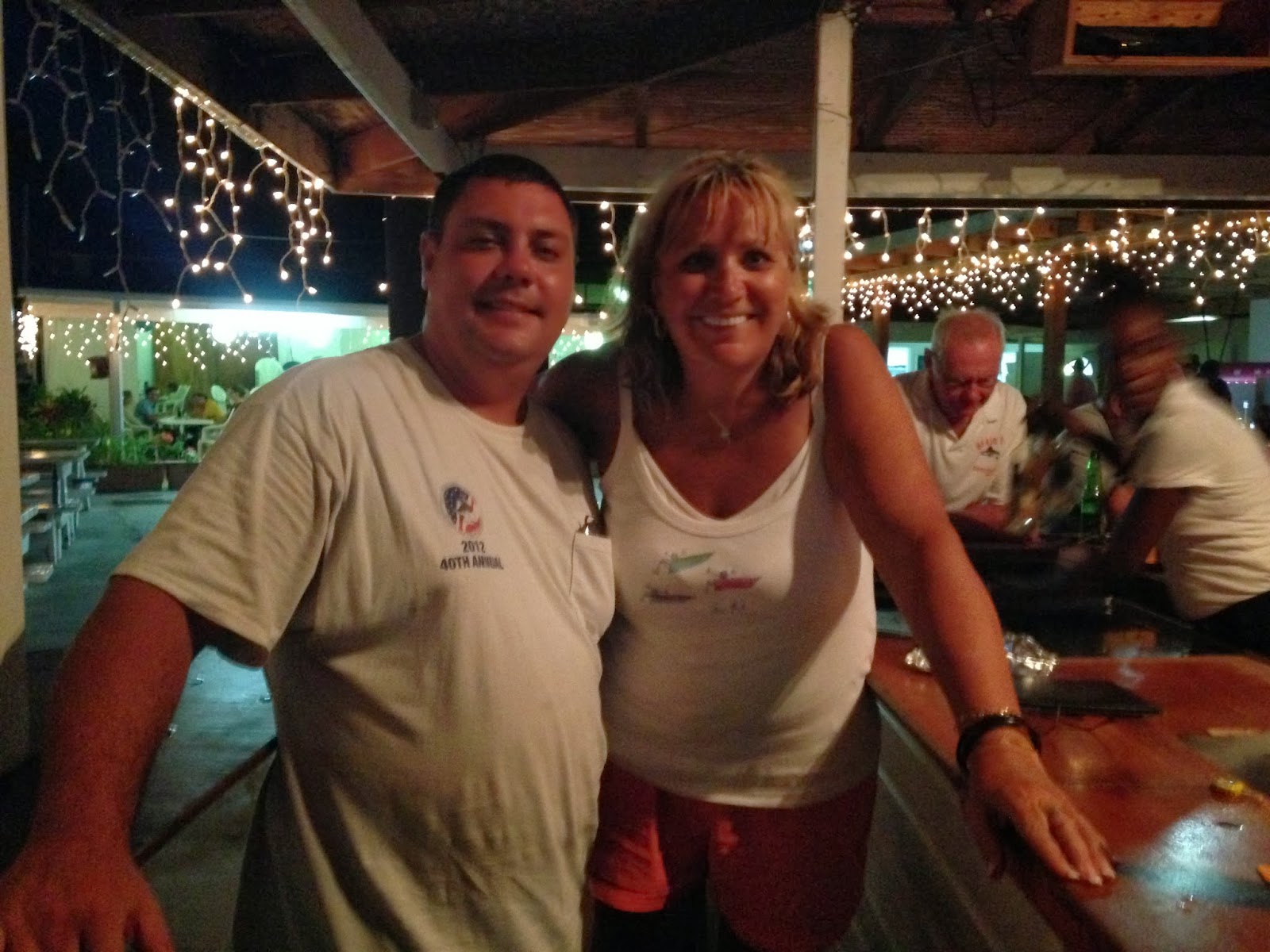 With Joe from Maine 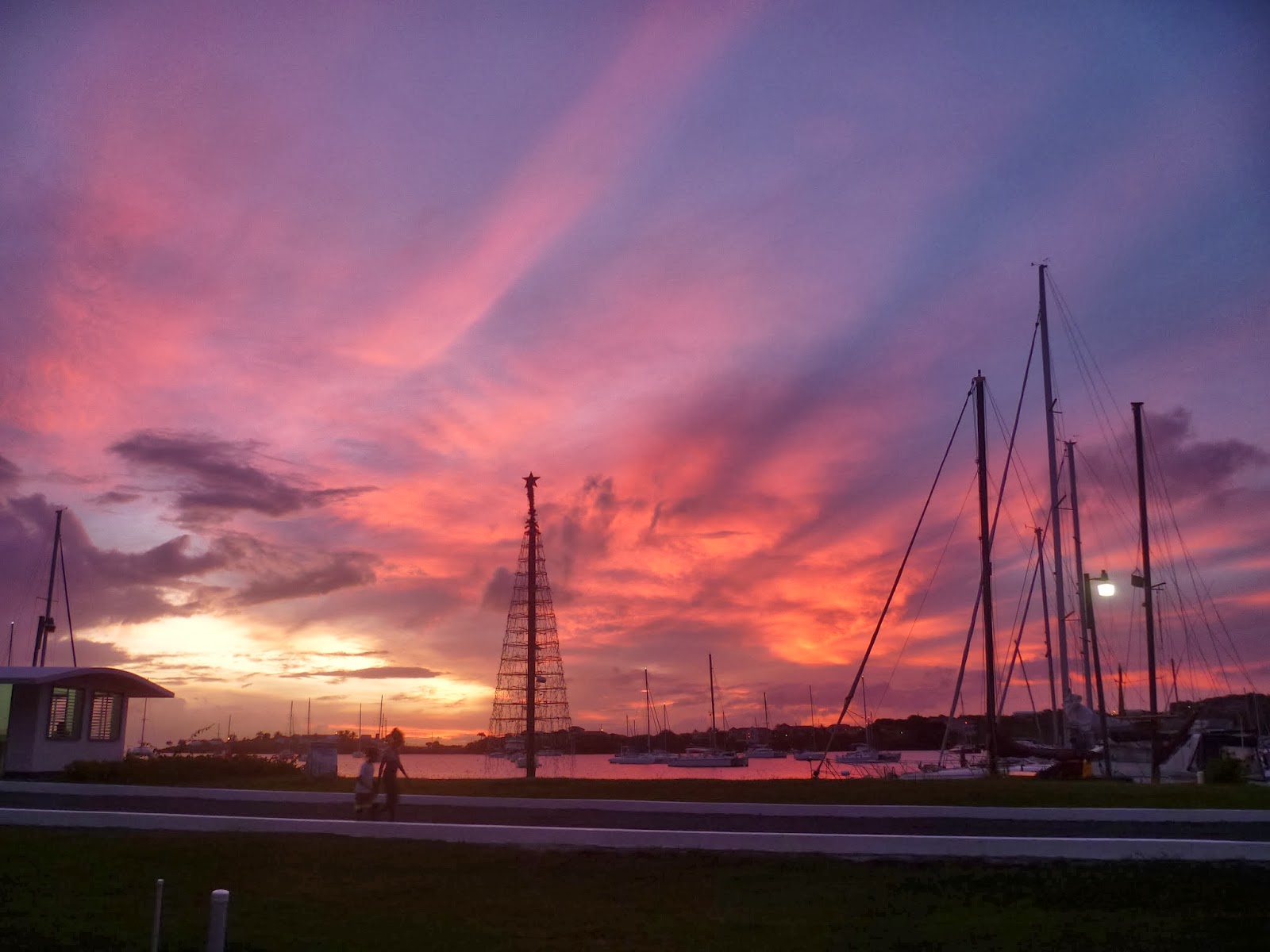 I am back at my hotel by 9:00 to loud and inconsiderate Italian (or whatever) neighbours.

I want to go over there and scream at them.  My British reserve and/or Canadian politeness keeps me in my room.
Posted by Sandy Montgomery at 10:04 PM No comments: